Collection:
Southeastern Native American Documents, 1730-1842
Title:
Letter, 1832 Nov. 22, Milledgeville to Governor Wilson Lumpkin, Milledgeville / John Coffee
Creator:
Coffee, John, 1782-1836
Date of Original:
1832-11-22
Subject:
Cherokee Indians--Land tenure
Georgia. Militia--Demobilization
Location:
United States, Georgia, 32.75042, -83.50018
Medium:
letters (correspondence)
Type:
Text
Format:
text/html
image/jpeg
Description:
This is a letter dated November 22, 1832 at Milledgeville from General John Coffee to Governor Wilson Lumpkin (Governor of Georgia, 1831-1835) regarding the governor's request for Coffee's opinion about the proper military arrangements that should be made once the troops stationed near the Cherokee Nation are dismissed. Coffee says that, unless the state provides some kind of protection in the area, those who draw land in the lottery will force the Cherokees off their land and force them to abandon their possessions.
Digital image and encoded transcription of an original manuscript, scanned, transcribed and encoded by the Digital Library of Georgia in 2001, as part of GALILEO, funded in part by a grant from the Institute of Museum and Library Services.
Local Identifier:
tcc720
Metadata URL:
https://dlg.usg.edu/record/dlg_zlna_tcc720
Digital Object URL:
https://dlg.usg.edu/record/dlg_zlna_tcc720#item
Language:
eng
Bibliographic Citation (Cite As):
Cite as: [title of item], Telamon Cuyler, Hargrett Rare Book and Manuscript Library, The University of Georgia Libraries, presented in the Digital Library of Georgia
Extent:
3 pages/leaves
Original Collection:
Manuscript held by the Hargrett Rare Book and Manuscript Library, The University of Georgia Libraries, Telamon Cuyler, box 01, folder 46, document 25.
Holding Institution:
Hargrett Library
Rights:

November 22 -- 1832
Governor Lumpkin
Sir;
In answer to your enquiry of yesterday, asking "What regulations in my opinion would be necessary for the protections of the Indians in the Chartered limits of Georgia, after the present Guard is dismissed."" I have the honor of stating that I am of Opinion that unless the Legislature should make some provision for their protection, the Indians will be compeld [compelled] to abandon their possessions, or apply to the General Government for that protection, which for the honor, and interest of Georgia should be afforded by the state. The great desire of our citizens to enjoy immediately the lands they may draw, will induce them to make every effort in their power to drive the Indians from their improvements. If the state would appoint an agent for the protection of the Indians and their property, who should reside in the country, and have command of eight or ten men, he could give them the necessary protection, aid the civil authority in enforcing the laws of the state; and protect from trespass such


Page: [2]
valueable [valuable] gold mines as may be drawn by widows, orphans or such persons as may not take immediate possession of them. This I am inclined to think would be the only way to afford the protection the honor of the state demands, if his interest did not require it. The expence [expense] of this guard will be inconsiderable, and the time short that will require it to be continued, for I have the strongest reasons to believe that should the state evince a desire to give the Indians the necessary protection, and do them ample Justice in all things, that this perplexing business will speedily be adjusted to the entire satisfaction of all. These ideas are hastily thrown together for your exelencys [excellency's] reflections,
by your Obdt Servt. [Obedient Servant]
[Signed] Jno [John] Coffee
To his Excellency Wilson Lumpkin Milledgeville

To His Excellency Wilson Lumpkin Present. 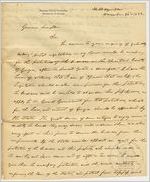