Collection:
Southeastern Native American Documents, 1730-1842
Title:
[Letter] 1832 Nov. 9, Etowah, [Cherokee Nation] to Governor [Wilson] Lumpkin, Milledgeville, Georgia / John Coffee
Creator:
Coffee, John, 1782-1836
Date of Original:
1832-11-09
Subject:
Cherokee Indians--Treaties
Cherokee Indians--Government relations
Cherokee Indians--Land tenure
Location:
United States, Georgia, 32.75042, -83.50018
Medium:
official reports
Type:
Text
Format:
text/html
image/jpeg
Description:
This is a letter dated November 9, 1832 from John Coffee in Etowah to Governor Wilson Lumpkin (Governor of Georgia, 1831-1835) in Milledgeville. Coffee mentions that he has enclosed with this letter the payroll for the third quarter, but it does not survive with this document. He goes on to report that the Cherokee Council has met and complains that he has had trouble learning much about their deliberations. Coffee says that he has heard that the Council appointed John Ross, Richard Taylor, Joseph Vann and John Baldridge as delegates to attend the coming session of Congress, but he is not sure if they have the authority to sign a treaty or if they will require that U. S. commissioners meet with them in the nation before they will consider a treaty. Coffee says that he suspects the latter case, as Ross would not jeopardize his popularity by signing a treaty without knowing for sure that it would be accepted by the rest of the nation. Coffee expresses his confidence, however, that a treaty will be signed if Andrew Jackson is re-elected. He closes the letter by suggesting that it would be wise to maintain troops in the area to guard against any unrest during and after the land lottery.
Digital image and encoded transcription of an original manuscript, scanned, transcribed and encoded by the Digital Library of Georgia in 2001, as part of GALILEO, funded in part by a grant from the Institute of Museum and Library Services.
Local Identifier:
tcc719
Metadata URL:
https://dlg.usg.edu/record/dlg_zlna_tcc719
Digital Object URL:
https://dlg.usg.edu/record/dlg_zlna_tcc719#item
Language:
eng
Bibliographic Citation (Cite As):
Cite as: [title of item], Telamon Cuyler, Hargrett Rare Book and Manuscript Library, The University of Georgia Libraries, presented in the Digital Library of Georgia
Extent:
3 pages/leaves
Original Collection:
Manuscript held by the Hargrett Rare Book and Manuscript Library, The University of Georgia Libraries, Telamon Cuyler, box 01, folder 46, document 24.
Holding Institution:
Hargrett Library
Rights:

November 9th 1832
Governor Lumpkin
Sir
Inclosed I have the honor of sending you the pay roll for the third Quarter of the present year, you will please have it connected with the report forwarded by Col [Colonel] Williamson.
The deliberations of the late Cherokee council has been conducted with more than their usual acuracy [accuracy] & caution. it has been a difficult matter to learn any thing satisfactory of their deliberations. from the best information that I have been able to obtain, they have appointed John Ross, Richard Taylor, [unclear text: Joe ] Vann and [unclear text: Baldridge ], delegates to attend at Washington city during the approaching session of congress, some say that they have powers to treat at Washington, others think, that, after finding the extent the government will go, they will request commissioners to meet in the nation I am inclined to the latter opinion as it will be more satisfactory to the people to have the treaty when they can witness every thing themselves, and Ross will not hazard his popularity by making a treaty unless he is confident it is approved by the nation generally

I have no doubt but a treaty will be made some where, as soon as it is ascertained that Genl. [General] Jackson is reelected. Crops of corn are verry [very] short in this part of the state, it is necessary for economy, that our purchases should be made as early as possible, you will please give me your opinion as to the probable time we shall be retained in the service of the State. I have declined giving my opinion about returning the Guard longer than to the close of the lottery, because it might be considered that I felt an interest in its continuance, but I know that it will be necessary to retain a part of the men in service, untill [until] the fractions are disposed of, if the public property is to be protected, and I fear it will be found necessary untill [until] the Indians are removed for their protection; I have been compeld [compelled] already to send a detachment of some eight, or ten miles to remove a man who had taken possession of an Indians land, without the [unclear text: shadow ] of title, what will they do after they have drawn the land, & think they should have [deleted text: it ] possession of it? please converse with Coln [Colonel] Williamson on this subject.

I have the honor to be most respectfully your Excellencys obdt. Servt [obedient Servant]
[Signed] Jno [John] Coffee
To Governor Lumpkin. Milledgeville. 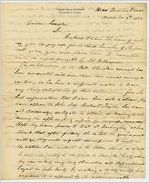