Collection:
Southeastern Native American Documents, 1730-1842
Title:
Letter, 1832 July 21, Head Quarters, [Etowah], Ch[erokee Nation] to Wilson Lumpkin, Governor [of Georgia], Milledgeville, Georgia / John Coffee
Creator:
Coffee, John, 1782-1836
Date of Original:
1832-07-21
Subject:
Cherokee Indians--Treaties
Cherokee Indians--Government relations
Location:
United States, Georgia, 32.75042, -83.50018
Medium:
official reports
military records
Type:
Text
Format:
text/html
image/jpeg
Description:
This letter, dated July 21, 1832 from General John Coffee to Wilson Lumpkin, Governor of Georgia (1831-1835), relates to the arrest and trial of Mr. Brown, one of the Georgia surveyors in Cherokee territory. Coffee reports that Cherokee leader John Ross directed James McNair, Nicholas McNair, and Rily Thornton to arrest Brown and try him for violating the Intercourse Law of 1802. Brown was arrested and taken to Tennessee to be tried, but his case was dismissed by Judge Keith. Coffee says that he has already explained to the governor his reasons for delaying the arrest of the persons involved in seizing Brown. He also tells the governor that Cherokee chiefs in that area are in favor of a treaty and that Colonel Williamson has been travelling the Cherokee territory to rouse support for it.
Digital image and encoded transcription of an original manuscript, scanned, transcribed and encoded by the Digital Library of Georgia in 2001, as part of GALILEO, funded in part by a grant from the Institute of Museum and Library Services.
Local Identifier:
tcc717
Metadata URL:
https://dlg.usg.edu/record/dlg_zlna_tcc717
Digital Object URL:
https://dlg.usg.edu/record/dlg_zlna_tcc717#item
Language:
eng
Bibliographic Citation (Cite As):
Cite as: [title of item], Telamon Cuyler, Hargrett Rare Book and Manuscript Library, The University of Georgia Libraries, presented in the Digital Library of Georgia
Extent:
4 pages/leaves
Original Collection:
Manuscript held by the Hargrett Rare Book and Manuscript Library, The University of Georgia Libraries, Telamon Cuyler, box 01, folder 46, document 22.
Holding Institution:
Hargrett Library
Rights:


Head Quarters
July 21st. 1832.
Governor Lumpkin
Sir;
Your letter dated the
10th Inst [Instant] I have the honor to acknowledge, by yesterdays mail. I cannot but express my surprise that the letter written by Mr Brown had not arrived, as he informed me that it was written immediately on his release.
Mr. Brown was arrested by virtue of an order from John Ross, and directed to James McNair, Nicholas McNair, & Rily Thornton, directing them to arrest some one of the Georgia Surveyors, and carry him before Esqr [Esquire] McConnell of Tennessee, to be tried for a violation of the interco [added text: u ] rse law of
1802. James McNair was [added text: confined ] by a rheumatic afliction, this was the cause of Old McNairs agency in the affair. persuant [pursuant] to their directions they carried Mr. Brown before Esqr [Esquire] McConnell of Tennessee, who issued his warrant and had him placed under the care of a officer. Mr. Brown chose to be carried before Judge Keith of the district court of the U. S. for East Tennessee. Judge Keith refused to have any thing to do with him. Mr. Brown was then conducted before Esqr [Esquire] Johnston,


Page: [2]
who committed him to the custody of the Jailer of Athens Tennessee. In the mean time Mr. Brown was informed that Judge Keith would not object to hearing the case if he was brought before him by a habeas corpus, this was done, and after a full investigation of the matter Mr. Brown was discharged. The whole of the proceedings occupied from wednesday untill [until] the following monday, all of which time Brown was in custody. These are the facts of the arrest, & trial as I understand them, and I have no doubt but will be fully established before the court when necessary. My reasons for postponing the arrest of the persons engaged in this matter you are already in possession of, and I hope will approve them. Old McNair passed through this neighbourhood [neighborhood] a few days since, and wrote me a note. I went to see him, and rode with him several miles, he was on his way to Rogers's, I have heard from them some and they are in favour [favor] of a treaty. he will go by Dave Vanns, & Ross's to the council, and I have no doubt but he feels as much interest in bring about a treaty as yourself, And I have now but little doubt but it will be accomplished. All the principle [principal] Chiefs in this part of the nation are decidedly in favour [favor] of treating, and as far as I can learn this disposition is gaining


Page: [3]
rapidly all over the nation. Coln. [Colonel] Williamson has been several days visiting the chiefs in Oostanollee and that neighbourhood [neighborhood], and I have no doubt will do much good. I shall set out in the morning and visit that part of the nation below the Allabama line the Look out mountain. I have determined not to attend the council, but have made arrangements to obtain all the information from that meeting. I hope that your public duty will permit you to visit this post from Athens after the commencement, and stay untill [until] after the council adjourns, or should you propose to spend your time at some one of the neighbouring [neighboring] villages, and will inform me which, Coln [Colonel] Williamson, or myself will have the honor of wating [waiting] on you, & giving you all the information immediately after the council adjourns.

I have the honor to be most respectfully your excellencys most Obdt Servt. [Obedient Servant]
[Signed] Jno [John] Coffee .
To his Excellency Governor Lumpkin Milledgeville

Not necessary to be answered. 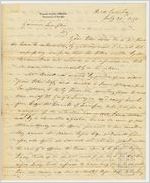