Collection:
Southeastern Native American Documents, 1730-1842
Title:
Letter, 1832 June 24, Etowah, [Cherokee Nation] to Wilson Lumpkin, Governor [of Georgia], Milledgeville, Georgia / John Coffee
Creator:
Coffee, John, 1782-1836
Date of Original:
1832-06-24
Subject:
Cherokee Indians--Land tenure
Surveying
Location:
United States, Georgia, 32.75042, -83.50018
Medium:
official reports
Type:
Text
Format:
text/html
image/jpeg
Description:
This is a letter dated June 24, 1832 from John Coffee in Etowah to Wilson Lumpkin, Governor of Georgia (1831-1835). Coffee writes in regard to the land surveys taking place in Cherokee territory in northern Georgia. He says that in all but a few of the districts the surveys are going well and that he has sent messages to all of the surveyors asking them for updates on their progress. He reports that some sections have yet to be surveyed, but he includes with his letter a brief list of the districts and sections that have been completed.
Digital image and encoded transcription of an original manuscript, scanned, transcribed and encoded by the Digital Library of Georgia in 2001, as part of GALILEO, funded in part by a grant from the Institute of Museum and Library Services.
Local Identifier:
tcc715
Metadata URL:
https://dlg.usg.edu/record/dlg_zlna_tcc715
Digital Object URL:
https://dlg.usg.edu/record/dlg_zlna_tcc715#item
Language:
eng
Bibliographic Citation (Cite As):
Cite as: [title of item], Telamon Cuyler, Hargrett Rare Book and Manuscript Library, The University of Georgia Libraries, presented in the Digital Library of Georgia
Extent:
4 pages/leaves
Original Collection:
Manuscript held by the Hargrett Rare Book and Manuscript Library, The University of Georgia Libraries, Telamon Cuyler, box 01, folder 46, document 20.
Holding Institution:
Hargrett Library
Rights:


Head Quarters Etowah
June 24th 1832.
Governor Lumpkin
Sir,
Your two letters dated the
8th, &
9 Inst. [Instant] I had the honor of receiving by fridays mail The subject to which the first relates, I think has been much exaggerated, I do not believe that it presents so formidable a front as has been represented to your excellency.
I had the pleasure of seeing your brother on his way from Carroll, and he informed me that he had written you on this subject, his letter and the information you have doubtly [undoubtedly] received from Coln. [Colonel] Williamson renders it unnecessary for me to go into the subject. You may rest assured that every effort in my power shall be made to restore harmony to the country.
I have this morning dispatched four of my men to the different parts of the country, to collect the information you wish on the subject of the surveys. This is a subject that I have been particularly attentive to, and have made every effort to obtain correct information, without taking upon myself the responsibility of sending expressly for that purpose, and I have heard of but a few districts where I think the survey is not going


Page: [2]
on as well as we could expect. I have written a circular to the surveyors, requesting them to state, what progress they have made, and when they expect to finish their districts; and have told them that it is by your direction, & for your information. I hope to be able to give you full information of every district by the
4th July.
The 18th. district 1st. section was allotted to Byers (not Rogers) of Habersham County, and I understand he is doing well, & will soon finish it; I heard before I received your letter that he had abandoned it [deleted text: but ] [added text: and ] I presume the report originated from the fact, that there was no surveyor in the 19th, district 1st section. I had written to you, on this subject, but before I mailed my letter, I understood that Mr. Himer, and Coln [Colonel] Christian had united their interest in surveying their two districts 4th. & 19th in the first section, and that they would proceed immediately on finishing the 4th to the 19th. I have seen Mr. Himer and he informs me that the Hightower river has verry [very] much protracted the survey of the 4th. but that they would finish it in less than a month, and proceed immediately to the 19th. which is [added text: a ] small district, and can be surveyed in a short time.
It has been reported here that Mr. Torrance had refused to survey the 17th. Dis. [District] 1st section, but I expect --


Page: [3]
the report originated from the same cause as that about the 18th. below I give you a list of the districts that I understand are surveyed, and no doubt there are many others I have not heard of. severil [several] I know will be finished in a few days.
I verry [very] much regret to learn of your bad health, permit me to hope Sir, that you will take a respite from your duties, untill [until] it is restored.

To his Excellency Wilson Lumpkin Governor of Georgia Milledgeville. 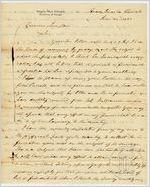