Collection:
Southeastern Native American Documents, 1730-1842
Title:
Letter, 1832 June 17, Etowah, [Cherokee Nation], to Wilson Lumpkin, Governor [of Georgia], Milledgeville, Georgia / John Coffee
Creator:
Coffee, John, 1782-1836
Date of Original:
1832-06-17
Subject:
Cherokee Indians--Treaties
Cherokee Indians--Government relations
Location:
United States, Georgia, 32.75042, -83.50018
Medium:
official reports
Type:
Text
Format:
text/html
image/jpeg
Description:
This is a letter dated June 17, 1832 from General John Coffee at Etowah to Wilson Lumpkin, Governor of Georgia (1831-1835). Coffee reports that the Cherokee delegation has returned from Washington and will hold a general council in a few days which he will attend. He says that Major (James M.C. ?) Montgomery reported to him that John Ridge, upon his return home, said that there was no alternative left for the Cherokees except to treat with the United States. Coffee also reports on a meeting with some Cherokee Chiefs, including Going Snake, Thomas Foreman, and John Walker, the latter of whom was opposed by the other chiefs but garnered the most support from the people who attended the meeting. Coffee says that he himself had been told that the Indians would be willing to treat in return for land reserves in the state. He closes the letter by recounting the Surveyors' complaints that the Indians were defacing their markers, and he promises to send a detachment the following week to cause them to desist.
Digital image and encoded transcription of an original manuscript, scanned, transcribed and encoded by the Digital Library of Georgia in 2001, as part of GALILEO, funded in part by a grant from the Institute of Museum and Library Services.
Local Identifier:
tcc714
Metadata URL:
https://dlg.usg.edu/record/dlg_zlna_tcc714
Digital Object URL:
https://dlg.usg.edu/record/dlg_zlna_tcc714#item
Language:
eng
Bibliographic Citation (Cite As):
Cite as: [title of item], Telamon Cuyler, Hargrett Rare Book and Manuscript Library, The University of Georgia Libraries, presented in the Digital Library of Georgia
Extent:
4 pages/leaves
Original Collection:
Manuscript held by the Hargrett Rare Book and Manuscript Library, The University of Georgia Libraries, Telamon Cuyler, box 01, folder 46, document 19.
Holding Institution:
Hargrett Library
Rights:


Head Quarters Etowah
June 17th 1832.
Governor Lumpkin,
Sir;
Your three letters dated
19th,
21st. &
26th May came in due time by the mail, those of the
10th, &
12th of the same month did not arrive untill [until] yesterday, this will account for your not receiving answers to them. I am happy however that I had anticipated your wishes, as expressed in that of the
12th in all my intercourse with these people, I have by all proper means endeavoured [endeavored] to conciliate & sooth [soothe], & I flatter myself that I have not intirely [entirely] failed of the object.
The Cherokee delegation have returned, I have not been able yet to learn any thing from them. I understand that a general council will be assembled in a few days, I shall be informed of the time, and have been invited to attend, which I have promised to do, should it meet your approbation.
I do not know your reasons for saying, that "the prospect of a treaty is less flattering now, than it was some time since," but presume it is on information received from washington. In a letter received from Genl. [General] Newnan dated at Washington on the
31st ult [ultimo], he says, "I presume our Indian [deleted text: relations ] [added text: difficulties ] will soon be setled [settled], notwithstanding the sly attempts of


Page: [2]
certain persons to prevent it." Majr [Major] Montgomery informed me, that Ridge, as he passed by McNairs, on his way home, said, that there was no alternative left but to treat. In a conversation I had the other day with Majr [Major] Davis on this subject, he shew [showed] me a letter he had received a few days before, from Mr. Hardwick, who resides at the agency, and is the son in law to Coln. [Colonel] Montgomery, in which he gives him an account of a meeting of some of the chiefs (Going snake, Tom Foreman, & Deer in the water &c. [et cetera] &c. [et cetera] ) for the purpose of putting down Jack Walker, as they had been directed by some of the chiefs; Walker was much alarmed, and attended the meeting with some of his friends. after the snake had finished reading and explaining his letter, Walker invited every person present that was friendly to him, to go and take a drink, upon which about two thirds of the company [unclear text: huzza'd ] for Walker, and went off with him. The Chiefs were [added text: verry [very] much ] mortified, and adjourned to meet the next day, at the Missionary station, and make out their report. Mr. Hardwick is of opinion, that if commissioners were now in the nation, they would find but little difficulty in treating with the Indians on the Tennessee side. and I know that a verry [very] happy change has taken place in this part of the nation, within the last four, or five months, if any reliance is to be placed on their declarations.

In all my conversations with these people, I have continually discouraged the [unclear text: Idea ] of their getting reserves in fee, in the Charter of Georgia. notwithstanding my opinion on this subject was generally known, I was asked the other day by a man of considerable influence in the country, and whose brother is one of the council, how many reserves I thought the state would consent to. I told him that I was not authorized to say, but I presumed she would not object to a fine to influential men, provided they were taken account there [their] improvements. this question, and one other he asked me, convinced me he was willing to treat if he could git [get] a reserve, and I have no doubt but it is the situation of many of the principal men. be so kind as to give me your opinions, and views upon this subject, that I may be able to answer the question more satisfactorily should it be again asked. you may rely on my making every effort in my power to effect a happy adjustment of this question.
The Surveyors from the 6th, & 11th districts 2nd section, passed by this place this morning on their return, they tell me that the Indians are defacing their numbers, and hiding the corners, this information I had received from a gentleman who surveyed a district adjoining them. I do not know how it is to be prevented; I shall send a detachment the next week, and demand of the Chiefs, the persons who


Page: [4]
are guilty of this conduct. I have no expectation that they will be given up, but it may alarm them, and they may desist. I fear Sir, that I give you too much trouble, but my desire that you should be acquainted with every thing relating to this country must be my apology.

I have the honor to be most respectfully your Exclencys [Excellency's] Obdt Servt. [Obedient Servant]
[Signed] Jno [John] Coffee
To His Exelency [Excellency] Wilson Lumpkin Milledgeville Ga [Georgia] 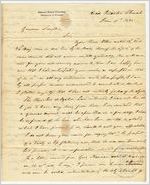