Collection:
Southeastern Native American Documents, 1730-1842
Title:
Letter, 1832 May 6, Etowah, [Cherokee Nation] to Wilson Lumpkin, Governor of Georgia, Milledgeville, Georgia / John Coffee
Creator:
Coffee, John, 1782-1836
Date of Original:
1832-05-06
Subject:
Cherokee Indians--Government relations
Surveying
Gold mines and mining
Location:
United States, Georgia, 32.75042, -83.50018
Medium:
official reports
military records
Type:
Text
Format:
text/html
image/jpeg
Description:
This is a letter dated May 6, 1832 from John Coffee in Etowah to Wilson Lumpkin, Governor of Georgia (1831-1835), regarding the Georgia land surveyors employed in Cherokee territory. Coffee reports that the Cherokees have been very friendly towards the surveyors. He also reports that Colonel Williamson has informed him that around one hundred people were found digging gold near Sweetwater Creek and that he has sent Sergeant Ray with a detachment to stop them. Coffee complains that they have had much trouble keeping Indians from mining gold since a recent decision by the Supreme Court (probably the case of Worcester v. Georgia). Coffee closes the letter with a promise to send Sergeant Ray to check on the progress of the surveyors near the North Carolina and Tennessee borders.
Digital image and encoded transcription of an original manuscript, scanned, transcribed and encoded by the Digital Library of Georgia in 2001, as part of GALILEO, funded in part by a grant from the Institute of Museum and Library Services.
Local Identifier:
tcc711
Metadata URL:
https://dlg.usg.edu/record/dlg_zlna_tcc711
Digital Object URL:
https://dlg.usg.edu/record/dlg_zlna_tcc711#item
Language:
eng
Bibliographic Citation (Cite As):
Cite as: [title of item], Telamon Cuyler, Hargrett Rare Book and Manuscript Library, The University of Georgia Libraries, presented in the Digital Library of Georgia
Extent:
4 pages/leaves
Original Collection:
Manuscript held by the Hargrett Rare Book and Manuscript Library, The University of Georgia Libraries, Telamon Cuyler, box 01, folder 46, document 16.
Holding Institution:
Hargrett Library
Rights:


Head Quarters Etowah
May 6th 1832.
Governor Lumpkin
Sir;
I informed you that Coln [Colonel] Williamson was instructed as soon as he ascertained that the Surveyers [Surveyors] were generally in their districts, to take a strong detachment and make a tour around the lower part of this nation, this duty has been performed to my entire satisfaction. + From a note left on the Order book by Coln. [Colonel] Williamson, and from Sergeant Ray, I learn that the natives are perfectly friendly, and that the surveyers [surveyors] are in fine spirits and progressing well.
I yesterday received a letter from Coln. [Colonel] Williamson, dated the 4th, at Camp Lumpkin, stating that he had received information, that an hundred persons were engaged in diging [digging] gold on the head of sweet water, near the Carrol, and Campbell line, and that they intended to resist a small detachment. I have this morning detached Sergeant Ray, with all the men that can be spared from this station to his aid,


Page: [2]
and I hope he will be able to give a good account of them.
Since the decision of the Supreme Court, the Indians appear determined to dig gold. as soon as we discover them in one place, they abandon it, and seek some hidden place, and open other pitts [pits] . Three have been committed to Gwinnett Jail, and others have been arrested, and bound over to court; If they continue to harrass [harass] us, as they have done for the last two, or three weeks, other and more energetick [energetic] means must be pursued, otherwise ourselves, and horses will be broken down, and the object not accomplished.
As soon as Sergeant Ray returns, I shall detach a small command to visit the vally towns, and see if they are friendly, and ascertain the progress the surveys are making, near the N. [North] Carolina, and Tennessee lines.

I have the honour [honor] to be most respectfully your exelency [excellency] Obdt Servt. [Obedient Servant]
[Signed] Jno [John] Coffee
His Exelency [Excellency] Wilson Lumpkin Governor of Georgia.

+ extract from the Order book
"We found most of the surveyers [surveyors] in their districts, all in fine spirits, Coln. [Colonel] Williamson held friendly conversations with all the leading men (cherokees) all the natives, evinced the most friendly disposition towards us, and also towards the surveyors, as we learnt [learned] from them." 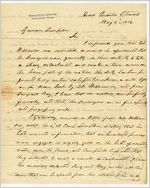