Collection:
Southeastern Native American Documents, 1730-1842
Title:
Letter, 1832 Mar. 25, Etowah to Governor Wilson Lumpkin, Milledgeville, Georgia / John Coffee
Creator:
Coffee, John, 1782-1836
Date of Original:
1832-03-25
Subject:
Cherokee Indians--Claims against
Cherokee Indians--Government relations
Location:
United States, Georgia, 32.75042, -83.50018
Medium:
official reports
military records
Type:
Text
Format:
text/html
image/jpeg
Description:
This is a letter dated March 25, 1832 from John Coffee in Etowah to Governor Wilson Lumpkin (Governor of Georgia, 1831-1835) in Milledgeville informing the governor that the two detachments sent out under Sergeants Young and Ray had returned the evening before. Ray, who was supposed to meet Young at Coosawattee and return with him through Ellijay to arrest two Indian chiefs named Whitepath and Sunday, was unsuccessful in his venture and returned without the two chiefs. Coffee considers Ray's mission a success, however, because he believes that it will send a message to inhabitants that they must obey the laws of the state. The letter also mentions a Sergeant Parker, who by chance came upon an Indian named Oulee (?) who was wanted for the murder of a young man near Carroll County.
Digital image and encoded transcription of an original manuscript, scanned, transcribed and encoded by the Digital Library of Georgia in 2001, as part of GALILEO, funded in part by a grant from the Institute of Museum and Library Services.
Local Identifier:
tcc710
Metadata URL:
https://dlg.usg.edu/record/dlg_zlna_tcc710
Digital Object URL:
https://dlg.usg.edu/record/dlg_zlna_tcc710#item
Language:
eng
Bibliographic Citation (Cite As):
Cite as: [title of item], Telamon Cuyler, Hargrett Rare Book and Manuscript Library, The University of Georgia Libraries, presented in the Digital Library of Georgia
Extent:
4 pages/leaves
Original Collection:
Manuscript held by the Hargrett Rare Book and Manuscript Library, The University of Georgia Libraries, Telamon Cuyler, box 01, folder 46, document 15.
Holding Institution:
Hargrett Library
Rights:

March 25th 1832.
Dear Sir;
Your two letters of the 13 & 14th Inst [Instant] I have received by friday's mail, the instructions which they contain shall be strictly complied with.
The detachment under sergeant Young sent to escort the emigrants to the agency and the one under Sergeant Ray who was directed to meet them at Coosewattee, and return through Alajay, and arrest White path & Sunday, for a violation of our laws, returned last evening the services rendered by sergeant young and his command are acknowledged in a letter from Majr [Major] Curry, seated at the Cherokee Agency on the 18th Inst. [Instant] *
On Sergeant Ray's approach to Alajay, the inhabitants fled in every direction, and he was unable to get White path or Sunday;


Page: [2]
his failure is more to be attributed to the want of a correct knowledge of the County, and the persons he was in pursuit of, than [added text: to ] a want of energy in the officers or men. Although this command has failed in accomplishing their principle [principal] object, I have no doubt but there [their] visit will have a verry [very] salutary effect, these people will begin to learn that they must obey the [deleted text: laws of the ] laws of the state, & they shall understand it fully before the summer is over.
Last week Sergeant Parker received instructions to assist Old Mr. Wofford in [deleted text: in ] hunting his children, they had been hid out by the friends of there [their] mother, to prevent him from carrying them to Arkansas; whilst upon this service they accidently [accidentally] came upon an Indian by the name of [unclear text: Oulee ], who had some time since committed the most deliberate, wanton, & unprovoked, murder upon a young man near Carroll county line, he was arrested and sent to Carroll Jail. [deleted text: [illegible text] ]

On these long trips it is impossible for us to carry forage for our horses, and often not enough provision for ourselves, this will swell our contingent account, but it is necessary, if we preserve order in the country. I hope to have the pleasure of seeing you during the first week in
April.

I have the honour [honor] to be most respectfully your Obdt Servt [Obedient Servant]
[Signed] Jno [John] Coffee .
To his Exelency [Excellency] Wilson Lumpkin Milledgeville
*Genl [General] Coffee Permit me to return my thanks to you for the aid afforded in sending Sergeant Young & the detachment under his command to this point, their services have been almost incalculable in the business of emigration. I have detained him one day longer than was anticipated for reasons connected with the public Interest.
[Signed] Benj. [Benjamin] F. Curry [unclear text: Supt Cher [Superintendent Cherokee] ] Emigration 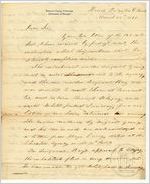