Collection:
Southeastern Native American Documents, 1730-1842
Title:
Letter, 1832 Mar. 17, Etowah to Governor Wilson Lumpkin, Milledgeville, Georgia / John Coffee
Creator:
Coffee, John, 1782-1836
Date of Original:
1832-03-17
Subject:
Cherokee Indians--Government relations
Cherokee Indians--Relocation
Location:
United States, Georgia, 32.75042, -83.50018
Medium:
official reports
military records
Type:
Text
Format:
text/html
image/jpeg
Description:
This is a letter dated March 17, 1832 from John Coffee in Etowah to Governor Wilson Lumpkin (Governor of Georgia, 1831-1835) in Milledgeville regarding the Cherokee removal in northern Georgia. Coffee mentions the Supreme Court's recent decision in the "Missionary Case" (ostensibly Worcester v. Georgia, 1832) and says that he regrets it as he believes it will interfere with the process of removal. He also quotes from a letter from the Secretary of War, which says that the President objects to the surveying and settling of Cherokee territory by the state of Georgia. Coffee further states that he has sent a detachment to accompany over a hundred Cherokees to the agency in Etowah, and he makes brief mention of the arrest and trial of two Cherokee chiefs, Whitepath and Sunday (?), for collecting debts under Cherokee laws.
Digital image and encoded transcription of an original manuscript, scanned, transcribed and encoded by the Digital Library of Georgia in 2001, as part of GALILEO, funded in part by a grant from the Institute of Museum and Library Services.
Local Identifier:
tcc709
Metadata URL:
https://dlg.usg.edu/record/dlg_zlna_tcc709
Digital Object URL:
https://dlg.usg.edu/record/dlg_zlna_tcc709#item
Language:
eng
Bibliographic Citation (Cite As):
Cite as: [title of item], Telamon Cuyler, Hargrett Rare Book and Manuscript Library, The University of Georgia Libraries, presented in the Digital Library of Georgia
Extent:
4 pages/leaves
Original Collection:
Manuscript held by the Hargrett Rare Book and Manuscript Library, The University of Georgia Libraries, Telamon Cuyler, box 01, folder 46, document 14.
Holding Institution:
Hargrett Library
Rights:

March 17th. 1832
Dr [Dear] Sir;
By yesterdays mail I received through Genl [General] Newnan the decission [decision] of the Supreme Court in the Missionary Case, this decission [decision] I greatly regret, not because it will in my opinion change our Indian relations, but may have a tendency to protract the final Settlement of this business.
The Genl [General] at the Same time furnished me with a letter from the Secretary of War, in which he Says "The Message of the President of
February 28th 1831 -- to which you refer, contains a full view of his sentiments [deleted text: upon ] upon the Question of the Jurisdiction of the respective States over the Indian tribes, within their respective limits. These Sentiments are unchanged, and will regulate his official duty in any Case to which they apply. Of the information you mention as having proceeded from this place Stating, "that if the Governor persisted in surveying and occupying under the present Law, the Cherokee Territory that he would meet with interruption from the President" I know nothing, Such as I did was never advanced by me, nor did I ever hear it advanced by


Page: [2]
the President." This determination of the President & Secretary of War, will I hope be a sufficient ofset [offset] against the decission [decision] of the Supreme Court and enable us in a short time to have things going on as they were before the decission [decision] was made.
At the earnest Solicitation of Majr. [Major] Curry I detached Sergt. [Sergeant] Young with a detachment of the Guard to escort an emigrating party of upwards of an hundred Persons to the Agency they will arrive there this day --
Sergt. [Sergeant] Ray will march tomorrow at 8 oclock A.M. and meet Youngs command on there [their] return march in the neighbourhood [neighborhood] of coosawattee. He will then proceed to Allajay for the purpose of arresting and bringing to trial Whitepath, and [unclear text: Sunday ], two chiefs who had recently organized a company of Light Horse, and are collecting debts under the Cherokee Laws -- From being entirely neglected the last year, these Chiefs have become verry [very] Bold, and believe their Mountains will protect them from our power. --
They shall be undeceived; the pilfering from the Gold mines is entirely suppressed and


Page: [3]
we Shall now have time to attend to other branches of our duty --

I have the Honor to most Respectfully your Excellency Obt Servt. [Obedient Servant]
[Signed] Jno [John] Coffee
To His Excellency Wilson Lumpkin Millidgeville Ga. [Georgia] 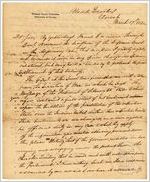