Collection:
Southeastern Native American Documents, 1730-1842
Title:
Letter, 1832 Mar. 3, Camp Lumpkin, to Governor Wilson Lumpkin, Milledgeville, Georgia / John Coffee
Creator:
Coffee, John, 1782-1836
Date of Original:
1832-03-03
Subject:
Cherokee Indians--Government relations
Cherokee Indians--Relocation
Location:
United States, Georgia, 32.75042, -83.50018
Medium:
official reports
Type:
Text
Format:
text/html
image/jpeg
Description:
This is a letter dated March 3, 1832 from John Coffee to Wilson Lumpkin , Governor of Georgia (1831-1835), regarding the efforts to remove the Cherokee Indians from the state of Georgia. Coffee reports that he has conversed with numerous Cherokee leaders respecting their delegation in Washington, and the anticipated outcomes of congressional deliberations on the subject. Coffee then goes on to discuss ways to convince the Cherokees to emigrate. He expresses his confidence that most of the Cherokees will agree to enroll for emigration by October. Coffee goes on to boast of the popularity of the Georgia Guard amongst the Cherokees, and he criticizes the efforts of some to destroy his reputation. He makes reference to two missionaries to the Cherokees (Elizur Butler and Samuel Worcester) imprisoned by the guard and remarks that he has declined to auction off their property considering the move very impolitic at present.
Digital image and encoded transcription of an original manuscript, scanned, transcribed and encoded by the Digital Library of Georgia in 2001, as part of GALILEO, funded in part by a grant from the Institute of Museum and Library Services.
Local Identifier:
tcc707
Metadata URL:
https://dlg.usg.edu/record/dlg_zlna_tcc707
Digital Object URL:
https://dlg.usg.edu/record/dlg_zlna_tcc707#item
Language:
eng
Bibliographic Citation (Cite As):
Cite as: [title of item], Telamon Cuyler, Hargrett Rare Book and Manuscript Library, The University of Georgia Libraries, presented in the Digital Library of Georgia
Extent:
3 pages/leaves
Original Collection:
Manuscript held by the Hargrett Rare Book and Manuscript Library, The University of Georgia Libraries, Telamon Cuyler, box 01, folder 46, document 12.
Holding Institution:
Hargrett Library
Rights:

Camp Lumpkin
March 3rd 1832.
Dear Sir;
I have delayed saying any thing about our Indian relations untill [until] I was in possession of such information that I could rely upon. I have seen several of the leading men of this country, and have conversed with them fully, & freely about their situation, and I have no doubt but they have communicated to me their views. They all declare that the delegation at Washington have no power to treat, as is generally believed by their people, but they say If Congress, nor the supreme Court makes no efforts to restore them to their ancient priveledges [privileges] they have no doubt a treaty will be made this summer or fall; that as soon as the delegation returns they will hold a general council & determine on the course they will persue [pursue], & the conditions they will accept. at first I made an effort to induce some of the principle men to emigrate, but on reflection I was induced to think they could be turned to better account by remaining. The most of them (that I have conversed with) would enrole [enroll] on condition that they could be permitted to remain untill [until] fall, this Majr [Major] Curry refuses at present, because if granted to one, all will expect the same indulgence, and his [unclear text: springs trip ] be partially defeated. I have little doubt however that it is the intention as soon as this party is off to commence inroling [enrolling] for the fall emigration, then if the prospect of a treaty should be any [unclear text: way ] doubtful, I know that most, if not all the influential men in the limits of


Page: [2]
Georgia will enrole [enroll] . but I have strong reasons for believing the great object will be accomplished in a shorter way. I have many reasons for saying that the Georgia Guard is not now viewed as the oppressors of the Cherokee, but they look to us for advice & protection, this [added text: is ] extreamly [extremely] mortifying to many, and efforts have been made, and are making to destroy our popularity with the natives; one plan was to prevail on me to rent out the familys [families] of the unfortunate missionary's [missionaries] now in the state prison, the moravian missionary, & other missionary property in the nation. I know that this property is subject, but I know at the same time, that the interest of Georgia can be better promoted by my cultivating the present good feeling that exists in all quarters of the nation, that it would be by the pittance thus acquired, and shall decline renting it, unless you direct me otherwise. [unclear text: Black Walter Adair ] & his whole connection will inrole [enroll] when advised to do so, but it is not my wish that he should at present, it is an extensive, & influential family & can be of great advantage in bringing about a general arrangement. I shall on all occations [occasions] cultivate the good opinion these people have of me, and have no doubt, if there is no interference from Washington, that the great object will be accomplished before
October.

I have the honor to be your Obdt Servt. [Obedient Servant]
[Signed] Jno [John] Coffee
To His Exelency [Excellency] Wilson Lumpkin Milledgeville. 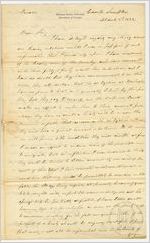