January 30th 1832 --
Sir,
About Ten years ago I settled a plantation on the West side of the Chatahoochee river (about 12 miles from Lawrenceville Gwinnett County) in right of my decent [descent] . below my dwelling house there is a bend in the river, which bend, I enclosed within a fence about five years ago, for three purposes, viz. 1st To save [unclear text: fencing ] and to enclose a field of 20 acres, which I cleared at the lower end of the bend. 2d. as I might require, open more fresh land within said bend. 3d. For the purpose of a woods pasture for my Hogs &c [et cetera]
Two white men (Webb, and Coleman) about 3 years [added text: ago ] unlawfully trespassed upon my rights by opening, or clearing, and planting 12 or 15 acres each, within my said fence, neither of them made a pannel [panel] of fence round there [their] fields, and my fence protected there [their] crops the three years. -- about 2 years ago certain other persons equally unlawfully, viz Z [Zachariah] Slayton, Andrew Hambleton John Hambleton -- Green and John Miller cleared land within my fence, Slayton about 20 acres. A. H. [Andrew Hamilton] about 12 acres. J. H. [John Hamilton] about 25 acres. Green about 10 acres. Miller about 5 acres, these persons have made 2 crops within my enclosure without a pannel [panel] of fence, my fence protecting their crops. last summer I waited upon Col [Colonel] Sandford the former agent and stated there [their] trespassing, who very promptly notified them to desist from further trespassing upon my rights so soon as they had gathered their crops. I have every reason to hope after the notification and planting my lands for two or three years under the circumstances above stated, that I Should have no further molestation from their outrageous [added text: & ] illegal trespass [deleted text: ing ] but finding under the last act of the Legislature [added text: that ] they could not plant the land themselves, they returned the same to Genl. [General] Coffee the present Agent as land cleared by white men. At the renting


Page: [2]
in Lawrence-ville I made a brief statement to Genl. [General] Coffee of the foregoing circumstances who informed me, he has not seen or [illegible text] the act in relation to unlawfull [unlawful] trespassing upon the natives &c [et cetera] and that he should refer my case to your Excellency for decision. I do not think it was the intention of the Legislature to infringe [added text: on ] the rights of the natives &c [et cetera], and I trust your Excellency will be of the same opinion. in fact, I do protest against a decision that is to wrest from me my just, and inherent rights, and which I have been in the occupancy of for nearly ten years, and that through the means of some of the most abandoned characters that disgrace a civilized [deleted text: soiety ] society, there [their] intrusion is contrary to the laws of the State, the U. S. [United States] and the rights of the Cherokee people some of these lawless characters (Slayton Webb &c [et cetera] ,) from the vilest vindictive feelings toward me, also reported to the agent a small place I had cleared on a creek about 2 miles from my plantation for the purpose of erecting a mill, this place I have been (or a white man under a permit) in [deleted text: my ] possession [added text: of ] for five years [added text: from the same motive ] . They also reported a small place about six miles from me, that was cleared by a cherokee 4 years ago, who shortly after died, since which, it has been occupied by a creek Indian, this was done no doubt because he was under my protection, this is another gross attempt to wrest the occupant right from the Indians, for certainly no white man, or the state can have a claim thereto, in the case, the agent Genl. [General] Coffee observed that he wou'd [would] rent the place -- but if upon enquiry he found my statement correct, he shou'd [should] cancel the bid. I wou'd [would] [illegible text] if you would give your construction upon this case. -- It may be proper for your information to observe that my fence above and below my house extends along the river about [added text: two ] (2) miles (very [added text: near the river ] narrow in some places) and may contain within my fence about six hundred acres [added text: about one half plantable land the rest poor ] . I work 20 to 22 hands and ought to cultivate about 300 acres of Lands


Page: [3]
including small grain, in consequence of the beforementioned intrusion, I was unable to plant more (Last year) than 150 acres. thus, I am unjustly narrowed within my own limits, or in other words prevented from clearing my own land, and that within my own fence -- as the season has nearly, if not quite, arrived for preparing Land for the present years crop, I would be [deleted text: glad ] gratified in your Excellency' making an early decision on your construction of the act for protecting the rights of the natives &c [et cetera], so that I may be prepared to act accordingly. -- altho' [although] hastilily [hastily] drawn up, and more brief than this communication, I think you will find the statement to Genl [General] Coffee in substance the same as this. In conclusion, I wish you wou'd [would] [document damaged: converse with ] Col. [Colonel] Sandford (I understand he lives in Milledgeville) in relation to his knowledge &c [et cetera], of my case --

I am very respectfully your Excellency' Obt Servt [Obedient Servant]
[Signed] Geo. [George] M. Waters
P. S. I take it will not be improper for me to suggest that if your Excellency sustains my rights, that an early notification to the persons trespassing within my enclosure will be necessary, as they have the impudence to declare, they will plant the land (unjustly claimed and returned by them) the present year --
His Excellency Wilson Lumpkin 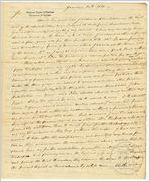