Collection:
Southeastern Native American Documents, 1730-1842
Title:
Letter, 1832 Jan. 27, Clarkesville, Georgia, to Wilson Lumpkin, Governor of Georgia, Milledgeville, Georgia / John Coffee
Creator:
Coffee, John, 1782-1836
Date of Original:
1832-01-27
Subject:
Cherokee Indians--Land tenure
Cherokee Indians--Claims against
Real property
Location:
United States, Georgia, 32.75042, -83.50018
Medium:
official reports
military records
Type:
Text
Format:
text/html
image/jpeg
Description:
This is a letter dated January 27, 1832 from John Coffee in Clarkesville (Habersham County, Georgia) to Wilson Lumpkin, Governor of Georgia (1831-1835), regarding Coffee's efforts to rent lands formerly belonging to the Cherokees and to settle conflicting claims to said lands. Coffee reports that these improved lands are now of higher value than they previously were and have been commanding good prices. He also tells Governor Lumpkin that Indians in the area have committed depredations around local gold mines, and he has sent a detachment to scout the area. Coffee also reports threats from Indians near the Tennessee River, and he says that another detachment has been sent to that area.
Digital image and encoded transcription of an original manuscript, scanned, transcribed and encoded by the Digital Library of Georgia in 2001, as part of GALILEO, funded in part by a grant from the Institute of Museum and Library Services.
Local Identifier:
tcc702
Metadata URL:
https://dlg.usg.edu/record/dlg_zlna_tcc702
Digital Object URL:
https://dlg.usg.edu/record/dlg_zlna_tcc702#item
Language:
eng
Bibliographic Citation (Cite As):
Cite as: [title of item], Telamon Cuyler, Hargrett Rare Book and Manuscript Library, The University of Georgia Libraries, presented in the Digital Library of Georgia
Extent:
3 pages/leaves
Original Collection:
Manuscript held by the Hargrett Rare Book and Manuscript Library, The University of Georgia Libraries, Telamon Cuyler, box 01, folder 46, document 07.
Holding Institution:
Hargrett Library
Rights:


Clarkesville
Jany [January] 27. 1832
Dear Sir;
My time has been so entirely occupied attending to my duties in renting the abandoned improvements, and setting the many conflicting claims that I have not been able to write. The time allowed to travel from one country to another has in some instances been so short that I have been compeld [compelled] to use every diligence or not reach the appointments. this duty is now nearly over and I am happy to say that the improvements commanded good prices generally. there has been a falling off in some of the large plantations, but from all the information I can obtain they have rented for fully their value; the small improvements have generally rented at improved prices from the last year.
On my arrival at Head Quarters I learned that the Indians had taken advantage of the interregnum occationed [occasioned] by the reorganization of the guard and were committing depredations in the small [unclear text: way ] on the mines. the day after I arrived I sent a detachment


Page: [2]
to scour the country about the upper mines; and on the next day a detachment with similar orders was dispatched to the sixe's.
Soon after I left Scudders Colonel Williams was called upon to furnish a guard to escort some emigrating Indians to the Agency on Highwassee; the Indians on the Tennessee river having threatened to commit violence on them so even as they should cross our line, Mr Young with a detachment is now on this service. I hope to reach Head Quarters on wednesday next, when I shall again have the honor of addressing you should any thing occur. 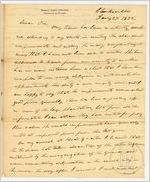