I John Hamilton Do Certify that I made one of the improvements herein mentioned Andrew Hamilton another Zachariah Slayten another Philip Coleman another and Clinton Webb made another -- they were all unoccupied -- & in the woods at the time we went there -- there was an old fence running up and down the river pretty much roted [rotted] down -- which was made as we were informed to prevent Cattle from the milksick weed on the low grounds -- these improvements were made by us within that inclosure, We have Cultivated those improvements ever since they were made --
Given under my hand this
23d Jany [January] 1832
[Signed] John Hamilton
Sworn to before me
[Signed] J. [unclear text: Wardlaw ] J. J. C

I Aron Underwood do certify that I was present at the making of Milksick fence and heard the overseers [added text: of waters ] Say that it was to Keep out the Cattle --

We Certify that we believe the within and above Stated facts to be true.

I Thomas Worthy Do Certify that the above named improvements were made & Cultivated all or most of them by white men -- they are & have been within a fence or enclosure of Considerable length made by Waters & others to keep Cattle off the low grounds to prevent them from, eating a weed Called milksick -- as I have been informed
Given under my hand this
23d Jany 1832
[Signed] Even Howell &
[Signed] Thos. [Thomas] Worthy

The above named improvements are within the bounds of that part of the County of Gwinnett in the occupancy of the Cherokee nation heretofore attached to Said County -- And are as we Conceive the property of the state & subject to be rented the present year agreable [agreeable] to the act of the Legislature of
1831 -- They have been most of them made by white men -- and are not now in possession of a native or natives of said nation -- they are now Claimed as we are informed by George Waters who holds or Claims to hold possession of the same, under a pretence [pretense] that he is a decendant [descendant] of [added text: a ] Cherokee who was a native & inhabitant of the nation & which pretence [pretense] we are of the opinions is untrue [deleted text: and void of truth and that in fact he is not a native of said nation or by any manner [illegible text] related to said nation of people ] -- All which is By the subscribers Respectfully submitted for the Consideration of the agent of the Government -- Together with the evidence relative to his (nativity) hereto annexed --
Given under our hands this
23rd day of Jany [January] 1832
[Signed] Alfred Webb
[Signed] Aaron Underwood his X mark
[Signed] Philip Coleman his X mark
[Signed] Isaac Brumbalow his X mark
To Genl [General] John Coffey Commander of Georgia Guard
[Signed] J. Wardlaw J. J. C 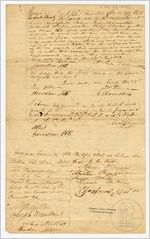