Collection:
Southeastern Native American Documents, 1730-1842
Title:
[Letter] 1824 Jan. 30, Dep[art]m[en]t of War [to] John Ross, [et al.] / J[ohn] C. Calhoun
Creator:
Calhoun, John C. (John Caldwell), 1782-1850
Date of Original:
1824-01-30
Subject:
Cherokee Indians--Land tenure
Cherokee Indians--Relocation
Cherokee Indians--Government relations
Cherokee Indians--Legal status, laws, etc.
Location:
United States, Georgia, 32.75042, -83.50018
Medium:
letters (correspondence)
Type:
Text
Format:
text/html
image/jpeg
Description:
This document is a letter from John C. Calhoun, Secretary of War, to Cherokee leaders John Ross, George Lowery, Elijah Hicks, and Major Ridge, dated January 30, 1824. Calhoun reminds the Cherokees of the 1802 Georgia Compact, in which the U.S. government promised to extinguish all Indian title to lands in Georgia. He argues that the Cherokees must realize that they cannot remain as a sovereign nation within the boundaries of Georgia, or any state. Calhoun states that ultimately the Cherokees must choose whether to remain in Georgia and suffer the pressure of the state and its citizens, or sell their remaining lands and migrate west of the Mississippi River. This letter is a response to tcc035, a letter dated Jan. 19, 1824 from the aforementioned Cherokee leaders. This January 30 letter occasioned a further correspondence from the Cherokees to Calhoun (tcc152).
Digital image and encoded transcription of an original manuscript, scanned, transcribed and encoded by the Digital Library of Georgia in 2001, as part of GALILEO, funded in part by a grant from the Institute of Museum and Library Services.
Local Identifier:
tcc691
Metadata URL:
https://dlg.usg.edu/record/dlg_zlna_tcc691
Digital Object URL:
https://dlg.usg.edu/record/dlg_zlna_tcc691#item
Language:
eng
Bibliographic Citation (Cite As):
Cite as: [title of item], Telamon Cuyler, Hargrett Rare Book and Manuscript Library, The University of Georgia Libraries, presented in the Digital Library of Georgia
Extent:
4 pages/leaves
Original Collection:
Manuscript held by the Hargrett Rare Book and Manuscript Library, The University of Georgia Libraries, Telamon Cuyler, box 01, folder 29, document 02.
Holding Institution:
Hargrett Library
Rights:

Gentlemen,
The President has received your letter of the 19th inst: [instant] and after giving to it that mature consideration which the importance of the subject, to which it refers, demands, he has directed me to communicate to you the following answer.
By the compact with Georgia, the U States are bound to extinguish for the use of the State, the Indian title to lands within the State, as soon as it can be done peaceably, and on reasonable conditions, and the Legislature & Executive of Georgia, now press the fulfilment [fulfillment], of that stipulation, with the utmost possible earnestness. This Government is anxious to fulfil the agreement, provided it can be done, on conditions which accord with the import of the compact, and which will also be satisfactory to the Indians. With a view to this object, we wish to have a free communication with you the Chiefs of the Cherokees, and to appear to the good sense, and the interest of the nation as pointed out by their own experience and by that of their ancestors


Page: [2]
for two centuries back.
You must be sensible that it will be impossible for you to remain, for any length of time, in your present situation, as a distinct society, or nation, within the limits of Georgia, or of any other state. Such a community is incompatible with our system, and must yield to it. This truth is too striking and obvious, not to be seen by all of you. Surrounded as you are by the people of [added text: the ] several States, you must either cease to be a distinct community, and become at no distant period, a part of the State within whose limits you are, or remove beyond the limits, of any State. For the U States to fulfill the compact with Georgia, the title which you hold to lands, as a distinct community, must be extinguished, and the State, objects to the extinguishment of it, by vesting in you, or in any of you, in lieu thereof, the right of individual ownership. If any of your acquire that right to land, and remain there, after the bond, which holds you together, as a distinct community is dissolved, & your present title is extinguished, it must be by purchasing the property, and acquiring the title from the State, within which it lies.
It remains for the Cherokee Nation to decide


Page: [3]
for itself, whether it will contribute most to their own welfare & happiness, for them to retain their present title to their lands, & remain where they are exposed to the discontent of Georgia and the presure [pressure] of her citizens, or to cede it to the U States for Georgia, at a fair price, to be paid, either in other lands beyond the Mississippi, or in money to be vested, in lands, to be purchased for them, as individuals, within that or any other State. Should the nation decide to relinquish its present title, and to adopt either of the alternatives suggested, this Govt. is disposed to act generously with them. If they prefer to move in a body westward of the Mississippi, measures will be taken to acquire lands for them there, in sufficient amount, and in the quarter most agreeable to them. Facilities will also be afforded for their removal. Should they prefer to receive the value of their title, in money, with a view to purchase lands, in any of the States, & become citizens thereof, in that case, a fair price will be given, and proper aid afforded them, for the accomplishment of their object. Should the nation divide, and a portion of it pass the Mississippi, & the residue remain


Page: [4]
on this side, measures will be taken to give effect, to their wishes, by the compact to be entered into, in both respects. 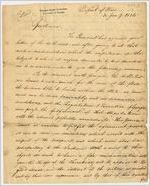