Collection:
Southeastern Native American Documents, 1730-1842
Title:
[Letter] 1826 May 7, Washington, [D.C. to George] Troup, Gov[ernor of Georgia] / J[oh]n Macpherson Berrien
Creator:
Berrien, John MacPherson, 1781-1856
Date of Original:
1826-05-07
Subject:
Creek Indians--Treaties
Treaties--Ratification
Creek Indians--Government relations
United States--Politics and government--1825-1829
Creek Indians--Relocation
Location:
United States, Georgia, 32.75042, -83.50018
Medium:
reports
Type:
Text
Format:
text/html
image/jpeg
Description:
This letter is from John Macpherson Berrien, U.S. Senator from Georgia, to George Troup, Governor of Georgia (1823-1827), dated May 7, 1826. Berrien reports to Troup on the proceedings of the Senate with respect to the ratification and proclamation of the Treaty of Washington, D.C. with the Creeks, and the rejection of various amendments he had proposed. Berrien indicates that he was successful in securing a bill to refer the issue of Creek emigration to the Committee on Indian Affairs, which promptly appointed Colonel David Brearly to superintend the process. He further states that some of McIntosh's delegation are being detained in Washington. This letter is also related to tcc685, tcc686, tcc687, and tcc689.
Digital image and encoded transcription of an original manuscript, scanned, transcribed and encoded by the Digital Library of Georgia in 2001, as part of GALILEO, funded in part by a grant from the Institute of Museum and Library Services.
Local Identifier:
tcc688
Metadata URL:
https://dlg.usg.edu/record/dlg_zlna_tcc688
Digital Object URL:
https://dlg.usg.edu/record/dlg_zlna_tcc688#item
Language:
eng
Bibliographic Citation (Cite As):
Cite as: [title of item], Telamon Cuyler, Hargrett Rare Book and Manuscript Library, The University of Georgia Libraries, presented in the Digital Library of Georgia
Extent:
4 pages/leaves
Original Collection:
Manuscript held by the Hargrett Rare Book and Manuscript Library, The University of Georgia Libraries, Telamon Cuyler, box 01, folder 19, document 04.
Holding Institution:
Hargrett Library
Rights:


Washington
7th May 1826
My dear Sir,
I have before advised you of the operations in the Senate, on the subject of the treaty and of the reasons, which influenced Mr Cobb & myself in the course which we pursued. You will have seen also by the papers, that the amendments which I proposed to the treaty, having been objected to, on account of the danger of rejection, to which that instrument might be exposed, by their adoption, that I had introduced a resolution referring the subject to the Committee on Indian affairs -- This was promptly acted upon, and a bill was reported and has passed the Senate with some little opposition, providing for the appointment of an agent for the emigrating party, appropriating $20,000 for the payment for improvements left by them & not within the ceded territory, allowing a further term for an increased number of emigrants,


Page: [2]
to each of whom is to be given a rifle gun, ammunition &c&c&c [et cetera et cetera et cetera] for whom depots of provisions are to be established on the route to the Mississippi, the agent to have full access to the Creek nation under protection of the US, for the purpose of inducing individuals to emigrate, & these inducements are offered to all who shall emigrate within two years -- Col Tattnall believes that this bill will pass through the house of Representatives -- If it does, I shall [deleted text: believe ] [added text: think ] that much has been accomplished for the removal of the Indians from our limits -- Col Brearly an individual selected by the McIntosh delegation has been nominated by the President as their agent & will be confirmed tomorrow- We detain a portion of the delegation here, that their agent may accompany them, which he is prepared to do. Our impression is that their return under these circumstances, will have a valuable effect in the nation, since after a long course of operations of an opposite character, this will serve to shew [show] that the friendly chiefs are also under the protection


Page: [3]
of the United States -- I have been gratified throughout this affair, by the fact that you have been spoken of, in terms of respect, even by those who have leaned towards our opponents. That we have failed to obtain our own demands in terms, is to be ascribed to the unwillingness of many who are friendly to us to encounter the responsibility which must have been consequent to a full investigation of & decision upon our claim, and to the belief that our rights have been substantially secured by the treaty which has been concluded --
Mr Key has been engaged in attending some of the neighboring [unclear text: Courts ] . I will take an early opportunity to obtain from him the information which you require meanwhile I comply with your request by the enclosed, which [unclear text: fines ] [added text: the compensation at ] the lowest ordinary retainer in the Supreme Court -- It was one of two cases which I came to attend in the term of
1825 & for wh [which] I recd [received] this precise sum in advance -- You will oblige me if you will forward


Page: [4]
the amount to Mr Davies, to whom I will give the necessary directions for its application --
I am sorry to hear of your continued debility -- You do not I presume give yourself the necessary relaxation from the concerns of your office -- I am just now feeling myself the effects of the winters confinement -- Pray let me hear from you as early & as fully as your leisure & convenience may permit -- and believe me

Respectfully & truly yrs. [yours]
[Signed] Jn. [John] Macpherson Berrien
PS. It does not occur to me, why the compensation in the case of the Africans, should be placed below the ordinary rate- nor what are the various reasons to which you refer -- but if a doubt remains in your mind as to the propriety of the amt [amount] claimed, will you do me the favor to take the opinion of Mr [unclear text: Wilde ] who is the counsel of Mr Bowen -- stating the enquiry to be at my instance, or omitting to state it, as you may think proper --
Gov: Troup 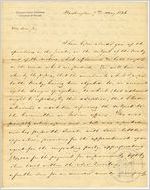