Collection:
Southeastern Native American Documents, 1730-1842
Title:
[Letter] 1826 Apr. 22, Washington, [D.C. to George] Troup, Governor [of Georgia] / J[oh]n Macpherson Berrien
Creator:
Berrien, John MacPherson, 1781-1856
Date of Original:
1826-04-22
Subject:
Creek Indians--Treaties
Creek Indians--Government relations
United States--Politics and government--1825-1829
Treaties--Ratification
Location:
United States, Georgia, 32.75042, -83.50018
Medium:
letters (correspondence)
Type:
Text
Format:
text/html
image/jpeg
Description:
This letter from John Macpherson Berrien, U.S. Senator from Georgia, to George Troup, Governor of Georgia (1823-1827), is dated April 22, 1826. Berrien reports to Troup on the Senate's proclamation of the Treaty of Washington, D.C. with the Creek Indians (signed January 24, 1826), which nullified the Treaty of Indian Springs (February 12, 1825). Berrien indicates his dissatisfaction with the nullification of the Indian Springs treaty, which had ceded all remaining Creek lands in Georgia, and asserts that it was unnecessary to void the treaty. He complains that the new treaty does not contain sufficient provisions for the McIntosh party (those Creeks associated with William McIntosh, who was executed for having signed the Indian Springs treaty) nor inducements for emigration. This letter is related to tcc685, tcc687, tcc688, and tcc689.
Digital image and encoded transcription of an original manuscript, scanned, transcribed and encoded by the Digital Library of Georgia in 2001, as part of GALILEO, funded in part by a grant from the Institute of Museum and Library Services.
Local Identifier:
tcc686
Metadata URL:
https://dlg.usg.edu/record/dlg_zlna_tcc686
Digital Object URL:
https://dlg.usg.edu/record/dlg_zlna_tcc686#item
Language:
eng
Bibliographic Citation (Cite As):
Cite as: [title of item], Telamon Cuyler, Hargrett Rare Book and Manuscript Library, The University of Georgia Libraries, presented in the Digital Library of Georgia
Extent:
4 pages/leaves
Original Collection:
Manuscript held by the Hargrett Rare Book and Manuscript Library, The University of Georgia Libraries, Telamon Cuyler, box 01, folder 19, document 02.
Holding Institution:
Hargrett Library
Rights:


Washington
22nd April 1826
Dear Sir,
Mr Cobb advised you by the last mail, that the treaty with the Creek tribe had been finally acted upon by the Senate yesterday- I was prevented myself from writing by the circumstance which I stated to you in a post-script to his letter -- From the commencement of this affair it was manifest that we should have to contend against the might of the administration, and the reluctance of those even among our own friends who [deleted text: [illegible text] ] [added text: wished to avoid the necessity ] of deciding the whole merits of the controversy -- Up to the moment when the last additional article was negociated [negotiated] I believed we Should be able to get the [added text: new ] treaty rejected, but at all times I have felt much apprehension of the fate of the old treaty when that Should be submitted to the decision of the Senate -- While things were in this State of incertainty [uncertainty], my colleagues, who had been examining various maps, with a view to answer certain enquiries


Page: [2]
made by Major Crawford, came to the conclusion that much less of the land within our limits was left out by the new treaty than we had before supposed. In this opinion he was supported by Major Meriwether, whose knowledge of the country, gave that opinion a claim to much respect. We determined after consultation to communicate this [deleted text: opinion ] [added text: new view ] to the Secretary of War, and to suggest to him the probability that when this fact came to be known to the Indians, they might be induced to extend the terms of the treaty so as to embrace all the lands within the limits of Georgia. We told him at the same time, that although some constitutional difficulties would still remain, it would relieve the question from its chief embarassment [embarrassment], that which arose from the vested right acquired by Georgia under the former treaty, and we urged that this extension should in terms embrace all the lands within the limits of Georgia At this moment Col Benton interposed & entered into our views of the subject- but finding the Indians determined to have a specified boundary he eventually adapted that wh [which] is found in the


Page: [3]
additional article -- My colleague for the reasons which he has explained to you, believes that [added text: it ] will include all our lands. His opinion is supported by that of Major Meriwether, and I have no reason to doubt its truth -- If this be so, our object is attained- and I am now satisfied from what occurred in the course of the debate, that even without this [deleted text: new ] [added text: additional ] article, the new treaty would have been ratified -- Thus [deleted text: it ] [added text: the additional article ] may be considered as a clear gain to Georgia -- Still the treaty as presented, has insuperable objections in our view -- It unnecessarily declared the old treaty to be null & void -- and it did not contain sufficient provisions for the McIntosh party to induce them to emigrate -- We endeavored in vain to remove these objections and also to obtain a comission [commission] in express terms of the lands within our limits -- We failed and consequently voted against the treaty -- in all which we trust we have met your views and the wishes of the people of Georgia. The McIntosh party here have assured us, that if sufficient encouragement is afforded they can carry away a very large proportion of the nation and those who opposed the insertions of provisions necessary for this purpose in the treaty, on the ground that it might endanger its ratification, expressed


Page: [4]
their willingness to make the same provisions by law- To meet this view, I have today presented a resolution which has been agreed to instructing the Committee on Indian Affairs to enquire into the expediency of reporting a bill for this purpose -- What will be the fate of this measure I know not -- If it prevails I shall believe that a most important object is secured to Georgia -- one which will atone on some degree for previous indignities & violations of her rights -- You shall be duly advised of its progress -- I cannot conclude this letter, without stating to you, that we have on all this affair, received a frank & cordial support from Genl [General] Harrison of Ohio, from Col Harper of South Carolina, from Mr Van Buren of New York, and though last not least from Judge White of Tennessee -- -- Pray let me hear from you, at your earliest leisure
& Believe me always very truly yrs [yours]
[Signed] Jn. [John] Macpherson Berrien
His Excellency Governor Troup 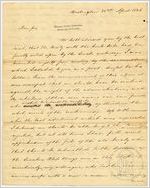