flint river
3d Novr [November] 1814
Colo. B. [Colonel Benjamin] Hawkins
Sir
my Son Timpuge arrived here yesterd [added text: ay ] from his route to Chehaw and old -- Kenerds old Kenerd told my Son that he had an Express come to him that the War Indians wer [were] on there [their] march wich allarmed [which alarmed] him a good deal wich [which] caused him to have an Express Sent on to you. Kenerd relates that the day after this happ [added text: ened ] five of the Aumanculle Cheifs [Chiefs] that had been down at the mouth of the rivers were [where] perriman lives arrived at there [their] town and informed Kenerd that the war partey [party] had Stoped comeing [Stopped coming] on in consequence of wich [which] Kenerd requested of my Son to proceed on up to Your house and give you the information, Catchaw micko hatke of aumancule requested of my Son to inform Colo [Colonel] Hawkins that all the people in his town take no part with the red Stiks but meain [mean] to hold the Americans there freinds [their friends] by the hand Join the Cowetaws there [their] friends the red people. the Aumnucule Cheifs [Chiefs] are all determined if the red Stick will begin to Spill blood that they meain [mean] to move there [their] Quarters up this way Somewer were [Somewhere where] they can Join there freinds [their friends], one thing the Catchaw micco Says when he and his people moves they have large familyes [families] and does not know what way he has to Support them without his -- freinds [friends] the white people will assist them -- one of the aumnuculle Chiefs that went on to perriman known by the name of hitchufulawa


Page: [2]
wich [which] I have always known to be a man of truth if any of the [illegible text] deserves the name in this land was the man that Stoped [Stopped] the red Stick from comeing [coming] on this Expedition wich [which] has been a good thing it may give our frontier inhabitants time to be better prepard [prepared] . it Seems the brittish officer that Was up at perrimans at the time urging the red Stick on was much offended at the Red people not proceeding on the route he and -- perriman pushed on down to the Stores at the mouth of the river. Should not have Wrote you So much as my Son was goeing [going] up by request of the Chiefs to tell you all the news but Expected you might be gone in to fort Hawkins am Still in So low a State am Scarcely able to Set [Sit] up to rite [write] or to walk aboute [about] . my Son can tell you aboute [about] your runaway black he Says when he got down to Aumancule that there was but very few red people in the town, the Wolfe Warrier at the time was laying very Sick, the first and only news he could hear of them Was that they were Seen ten miles of [off] from the East Side of the river twenty miles below Obaunes -- if you Should be at home when my Son gits [gets] up plese [please] Write me a few lines and if you have a late paper that you can Spare plese [please] Send me one or two. 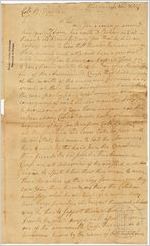