Rebel Town
19th. July 1793
Sir/
I have inclosed [enclosed] you two letters from Timothy Barnard, and a Talke [Talk] from the head Warrior and two of there [their] Chiefs, of the Cussetaws Town and a Coppy [Copy] of a Talk from the White Lieutenant of the Tuckebaches [document damaged] Seagrove, and a letter from Barnard to Seagrove by David Cornal, who was going down to Segroves with a Friendly Talke [Talk] from the upper Creeks, and was met by a Scout from about the [unclear text: Majr. [Major] ] within three Miles -- and was fired upon by them & have Killed Cornels [unclear text: A. G. J ] -- Cornels Father being a man of some influance [influence] in the upper Creeks -- and a friend to the Spanish Government will I am Convinced doe [do] every thing in his Power, against the State, and bring about a War


Page: [2]
if possible -- Takeing [Taking] a View of the diffirent [different] Informations we have nothing flattering -- and I am Convinced nothing will save us but Collecting a force sufficient to Chastise them without discrimination
My fellow informs me that there was a [document damaged: party of Indians ] sent from the Cowetaws to do mischief, about the time he left the Nation. 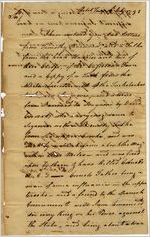