Collection:
Southeastern Native American Documents, 1730-1842
Title:
[Letter] 1793 July 6, Flint River, [Georgia to] Gen[era]l John Twiggs / [Timothy Barnard]
Creator:
Barnard, Timothy, 1745-1820
Date of Original:
1793-07-06
Subject:
Creek Indians--Crimes against
Creek Indians--Government relations
Cornel, David--Death and burial
Location:
United States, Georgia, 32.75042, -83.50018
Medium:
reports
Type:
Text
Format:
text/html
image/jpeg
Description:
This document is an incomplete and unsigned letter dated July 6, 1793 at the Flint River and addressed to General John Twiggs. It is very likely that the letter was written by Timothy Barnard, trader and assistant agent to the Creek Indians. The letter describes the murder of David Cornal (Cornell, Cornells), a young Tuckabatchee warrior who was part of a group carrying peace talks to Major James Seagrove at a military station (at Colerain(e), Camden County, Georgia) when they were attacked. Barnard speculates that the murderers may have been Spanish, but he fears that they were Americans and that this incident will further damage relations between Georgia and the Creeks. He mentions several Creek Indian groups including the Cussetas, Chehaws, Cowetas, and Uchees. He also mentions a Coweta leader called Short Neck and discusses trader William Panton's possible stake in the events. This letter is related to tcc679 and tcc680.
Digital image and encoded transcription of an original manuscript, scanned, transcribed and encoded by the Digital Library of Georgia in 2001, as part of GALILEO, funded in part by a grant from the Institute of Museum and Library Services.
Local Identifier:
tcc678
Metadata URL:
https://dlg.usg.edu/record/dlg_zlna_tcc678
Digital Object URL:
https://dlg.usg.edu/record/dlg_zlna_tcc678#item
Language:
eng
Bibliographic Citation (Cite As):
Cite as: [title of item], Telamon Cuyler, Hargrett Rare Book and Manuscript Library, The University of Georgia Libraries, presented in the Digital Library of Georgia
Extent:
8 pages/leaves
Original Collection:
Manuscript held by the Hargrett Rare Book and Manuscript Library, The University of Georgia Libraries, Telamon Cuyler, box 01, folder 11, document 11.
Holding Institution:
Hargrett Library
Rights:


Flint river
6th. July 1793
Genl [General] John Twiggs
Sir/
I recd. [received] your express by man August I have detained him longer than I wished to have done, as I was desirous of giving you all the information fully that was [unclear text: stirring ] in this quarter, which you will find by return of August that matters are much Confused at present by much more as at this Juncture in Consequence of a rash peace [piece] of business that has been some at St Marys within three miles of Majr. [Major] Seagroves Station by I fear some of our scouts on the Person of David Cornal who was going to the Station with peace talks from the whole upper Creeks & some of the lower to inform you with part of his business I have enclosed you a Coppy [Copy] of a letter for your perusal which I wrote for him as he went by my house, the
thirteenth May after he pased [passed] my house which was the day before yesterday, two of the Indians that went with him arrived back to my house


Page: [2]
naked & all most [almost] perished which informed me that when they got within thirty miles of the Station the white man that was with them one Mc.Donnald Galloped off & left them, there was but four of them in number, David Cornal a boy about Twelve Years Old & those two men that escaped & come back, they inform me that they proceeded on & by the place they describe were within less than three Miles of the Station when they Discovered a Company of Horsemen Comeing [Coming] up towards them along the path David Cornal was foremost & never offered to halt but kept forward up to them had no Gun in his hand he had none when he past [passed] my house the Boy was next driving three packt [packed] horses those two fellows were a foot some small distance behind who says that as soon as the White People come up at the Distance of about thirty or forty yards one of them spoke out loud to the rest & one of the men lited of [alighted off] his horse & took aim at Cornal which Stood still on


Page: [3]
his horse till the Gun fired & then whealed of [wheeled off] & stuck Spurs to his horse & the boy followed him those two fellows on seeing this made for a branch & was persued [pursued] close by some of the Company & fired on, one soon got to the thicket & hid, the other was overtaken at the edge of the branch & received a small stroke with a Sword on his arm but escaped they fired on him as he run in the branch but missed the other who lay still undiscovered says he seen one of the White People come riding up to the rest with Cornals Hat in his hand which was easily known as it was full of White & red feathers which Convinced them that Cornal is surely Killed which I fear is the case, I therefore (Sir) leave you to Judge whats to follow as I have given you a scatch [sketch] of the business he was on & of the friendly disposition of the whole of his Town & indeed the whole of the upper Creeks, you will likewise see from the Coppeys [Copies] of those other talks inclosed [enclosed] to you see that there was a great probability of matters been [being] settled but this matter I fear will put all a back as David Cornal was a head


Page: [4]
Warrier [Warrior] of the Tuckebatches & young man thought a great deal of and was turned a great friend to the U. [United] States tho [though] some of the Indians has been troublesome and outrageous yet we I hope are not to coppey [copy] after them & punnish [punish] the Innocent for the guilty I can still this nothing else but a Cowardly peace [piece] of shamefull [shameful] murder by men who I suppose wish to bear the name of Christians, to ride up to four one a boy & none with Guns but the two that were behind that were a foot & to fire on them, they well knew they were not men that were comeing [coming] to doe [do] mischief, what chance does a man Stand in this Country for his life that is known to be a friend to that quarter when such rash unhuman [inhuman] acts are Commited [Committed] on our best friends, how am I now to hold up my head to speak a Single word in favour [favor] of the United States, no the next thing I have to expect is that they will take revenge on me, which I wish may not be the case, I have no right to expect better from a Savage untaught People when men of knowledge commits such acts


Page: [5]2
acts, Government it is my opinion ought to punnish [punish] such men if the Indians had been as bad again as they are or else if there was a peace settled Tomorrow what Security is there for it to Continue, its true the Indians have been the first agressors [aggressors] & have taken lives, but let us consider that they have been sett [set] on by the Spannards as great Savages as the Indians them Selves & Panton who has the command of a very extensive trade in the Spanish dominions a man that I am convinced would rather see all the Frontiers of Georgia in flames than loose [lose] one hundred deer Skins, I have yesterday dispatched an express of [off] to Majr. [Major] Seagrove to know how this matter has happened & by whom as I have some small reason to supposse [suppose] as it may be the spannards that have a fort nearly oppersite [opposite] where it was done if proves to be them it will be so much the better, if other way I cannot pretend to say what will be the Consequence Satisfaction I know they will take


Page: [6]
Somewhere, I know likewise wrote up & sent word by the two fellows that escaped to inform there [their] People that I have sent of [off] an express to Majr [Major] Seagrove & for them to remain quiet till they hear from me which I hope will induce them to remain still till they hear the truth after that what will be the event time will bring to pass but as that town Cornal belonged to was in perfect peace with the United States & doing all they Could to make the other Towns so, I fear it will be the means of puting [putting] an end to all good intentions towards us besides his father is the Spanish interprator [interpreter] & it will in course ingage [engage] him to set his friends on besides it will be a fine peace [piece] of business for Panton & the Spannards both -- The Coppys [Copies] of the two talks in closed [enclosed] to you will serve to give you an Idea how the Indians in General are disposed as there was not the least dread of any thing bad to be expected from any of the other Towns except those that were first concerned which are the Cowetaws & Broken Arrows which are partly one Town & live close together


Page: [7]
the cussetaws & chehaws twelve miles below that which live on one spot & there [their] Towns Joins the uchees live three miles above the Chehaws [document damaged: they ] have committed no murders but Stole of a few horses Several of which I have taken & sent back to the owners the uchees have declined & have agreed to Joine [Join] the Cussetaws those other four Towns mentioned seemingly inclined to lay quiet none have been out for some time except a horse theaf [thief] or so the Cowetaws have had one man Killed on the upper parts of Georgia and one badley [badly] wounded not long agoe [ago] by Capt. [Captain] Harrison near Carrs bluff a Chehaw all wile [while] they were horse Stealing which the peaceable part of the nation was glad to hear if there should Still be Occation [Occasion] for a party of horse to come in & give these four Towns a Scurging [Scourging] & cut up there [their] Crops & burn there [their] Houses down I know no way they can be come at without disturbing the friendly disposed Towns as the waters are still very high & no fords nearer than thirty miles above the Cowetaws at a village were [where] a fellow called short neck lives all fro [document damaged: m that down ] are [document damaged: Settled ]


Page: [8]
with Cowetaws on both sides the river till you come within four miles of the Cussetaws which is on the east side the river then you are [document damaged: Opposite ] the Cowetaws there is fords nearly opposite the Cowetaws where the waters are low as I expect may be towards the fall & will not be then if this wet weather Continues Arther Dannely at the rock landing knows the fords I speak of at Short necks Vilage [Village] If matters had still held good I could have got some of the Cussetaws to have gone to the rock landing & pileted [piloted] men up as they had agreed according to your request to have got some of the head men from the rest of the friendly disposed Towns to have gone & met you at Carrs bluff & if these Towns still Continue to be troublesome & I have informed you how to have mannaged [managed] them but am affraid [afraid] this affair of Killing young Cornal will spoil all, not that I believe it will still move the Cussetaws till they are forced by been some of them Killed but it will in course made them Shye [Shy] of going down [document damaged: I sent one of the head ] men of the Cussetaws [page(s) missing] 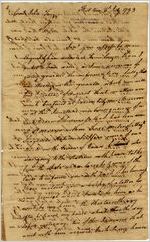