Collection:
Southeastern Native American Documents, 1730-1842
Title:
[Letter] 1787 June 8, Flint River, Georgia, [to] Governor [of] Georgia, George Mathews, Augusta, Georgia / Timothy Barnard
Creator:
Barnard, Timothy, 1745-1820
Date of Original:
1787-06-08
Subject:
Creek Indians--Land tenure
Creek Indians--Crimes against
Creek Indians--Warfare
Location:
United States, Georgia, 32.75042, -83.50018
Medium:
reports
Type:
Text
Format:
text/html
image/jpeg
Description:
This is an incomplete letter dated June 8, 1787 from Timothy Barnard, an Indian trader who lived amongst Creek Indians on the Flint River, to Governor George Mathews (Governor of Georgia, 1787-1788). Barnard says that the governor's recent talk sent to the Cussetas was well-received and that they all wanted the land dispute to be settled as soon as possible. He says, however, that recently six Creek Indians had been killed by white settlers just west of the Oconee River and that news of these killings had convinced the Indians that white settlers intended to wage war against them. Barnard warns that white settlers and their women and children are in danger of being attacked, and a peaceful solution is not possible. Barnard also complains that these recent troubles between the white settlers and the Indians has made it difficult for him to carry on his trading business, and he requests monetary compensation for his troubles. He goes on to warn that he has heard news of Indians to the north marching southward to aid the Creeks in their fight against the settlers.
Digital image and encoded transcription of an original manuscript, scanned, transcribed and encoded by the Digital Library of Georgia in 2001, as part of GALILEO, funded in part by a grant from the Institute of Museum and Library Services.
Local Identifier:
tcc674
Metadata URL:
https://dlg.usg.edu/record/dlg_zlna_tcc674
Digital Object URL:
https://dlg.usg.edu/record/dlg_zlna_tcc674#item
Language:
eng
Bibliographic Citation (Cite As):
Cite as: [title of item], Telamon Cuyler, Hargrett Rare Book and Manuscript Library, The University of Georgia Libraries, presented in the Digital Library of Georgia
Extent:
6 pages/leaves
Original Collection:
Manuscript held by the Hargrett Rare Book and Manuscript Library, The University of Georgia Libraries, Telamon Cuyler, box 01, folder 11, document 07.
Holding Institution:
Hargrett Library
Rights:


flint river
8th June 1787
Sir
I had the honnour [honor] to receive your letter and talks to the indians by Mr. John Galphin wich [which] I interpreted to them, those that were then presant [present] approved of Your talks much and [deleted text: and ] Said I Should have an answer as Soon as there [their] head men all returned from the floridais as some of the prinsipal [principal] head men at that time had Just set of [off] to visit the Spanards in answer to your letters and talks to the indians I wrote your honnour [honor] very fulley [fully] the 22d of last month by two men that were going to augusta The one I give the letters to went to ford the oakmulge river drowned himself and his horse and all the letters were lost the other returned back to me, [deleted text: [illegible text] ] [added text: matters ] in this quarter -- at that time were Somewhat precarious wich [which] in my letters I had then acquainted your honnour [honor] with, hopeing [hoping] at that time they might take a turn for the better as the cussetaws and buzzard roost had told me they would doe [do] Everything they could to keep peace and strive to git [get] the land affair Setled [Settled], but what has I am affraid [afraid] put an End to Every expectation of that kind came Express to me last Evening, a peaceable party of the buzzard indian


Page: 2
Seven in number were incamped [encamped] on the west Side the ocone river, and had been over several times amongst the peaceable inhabitants beging [begging] of milk from them aboute [about] the third or fourth of this month Six of them were Siting [Sitting] at There [Their] camp and were Sorounded [Surrounded] by a party of white people, [deleted text: and ] the whole Six of them were Shot down and the camp Stript [Stripped] of Every thing of any value that could be found, the one that was oute [out] a hunting came to his camp being So far of [off] did not hear the guns went boldly up and wile [while] viewing his dead cumrades [comrades], several guns was fired at him he run and was pursued by a number of horsemen but dodged them and made his Escape, came into his town in a day and night from the place and brings these tidings. The indians now Say that they See a war is determined against them. I think this has been a very rash proceeding of some headstrong men that did not consider what they were aboute [about] as if a war was determined uppon [upon] as the indians has commited [committed] some outerageous [outrageous] insults it would have been better to have kept it of [off] till the fall, till the poor Setlers [Settlers] could have housed the little crops and forteed [forted] themselves, as if the indians should turn oute [out] on a Sudden on the settlements they will make a dreadfull havock [dreadful havoc]


Page: 3
amongst the [deleted text: [illegible text] ] [added text: poor ] women and children, wich [which] I am much affraid [afraid] will be the case, nothing will prolong the time, but there [their] people at this time are very much scattered aboute [about], therefore [deleted text: therefore ] I advise your honnour [honor] to make every nessessary [necessary] preparation to gaurd [guard] the frontiers that possibly can be done as there is no time to be lost if after the indians meet and they should see cause to lay still so much the better, but I am almost Sure they will not rest till they have satisfaction for there [their] loss, and I make no doubt on some poor innocent people, if the country is in a state of defence [defense] and this is done on purpose to begin the Game I should have been Glad to have known it before, as the appointement [appointment] I had from the country has rendered me intirely uncapable [entirely incapable] of transact [added text: ing ] my own business and am here with chief of my property wich [which] I fear Shall be robed [robbed] of every day, wich [which] if I had not had other business to doe [do] could have got all my skins down long agoe [ago], instead of that have not been able to git [get] down the half of them my own people are all down at preasan [added text: t ] [present] at Mr Clarke and Eberts Store and am oblidge [obliged] to pay an Indian to take this down by way of the Store, as it would not be Safe to find one any other way


Page: 4
according to your desire in your letter I imployed [employed] Spies to give me Early information with respect to hostilityes [hostilities] on the Settlements and have done Every thing in my power to keep peace a wile [while] longer, And I belive [believe] could have done it if this affair had not hapned, wich [happened, which] I think it would have been better for the countrey [country] in General to have kept it of [off] till the fall. Shall still doe [do] Every thing in my power for the best and hopes your honnour [honor] and the honnourable [honorable] house of assembly will consider my case and allow me Some thing for my trouble and losses I Shall Sustain, I was likewise informed two dayes agoe [days ago] that there is a large boddy [body] of the norward [northward] Indians arived [arrived] in the chickesaws and are to proceed on toward the upper creeks to assist this nation agains [against] Georgia and that they are now holding meetings in the upper creeks to receive them I hear of five Ship loads of [illegible text] ariveing [arriving] in pensacola and that the [unclear text: dons ] are to take there [their] departure in Six months I cannot assert this but my athority [authority] is pretty good if so and we could have kept the [page(s) missing] 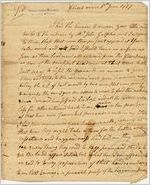