Collection:
Southeastern Native American Documents, 1730-1842
Title:
[Letter] 1787 May 1, Buzzard Roost, [Flint River], [to Governor George Mathews?] / Tim[oth]y Barnard
Creator:
Barnard, Timothy, 1745-1820
Date of Original:
1787-05-01
Subject:
Creek Indians--Claims against
Creek Indians--Government relations
Boundaries
Location:
United States, Georgia, 32.75042, -83.50018
Medium:
reports
Type:
Text
Format:
text/html
image/jpeg
Description:
This is a letter dated May 1, 1787 from Timothy Barnard at the Buzzard Roost on the Flint River, possibly written to Governor George Mathews (Governor of Georgia, 1787-1788) concerning boundary lines between Georgia settlers and the Creek Indians. Barnard complains that some of the Indians have not kept a promise made by Creek leader Alexander McGillivray that they would commit no insults against settlers for the next four months. Barnard promises the return of some horses that were allegedly stolen by the Cussetas, Cowetas, and Oakfuskees. He blames the Spaniards for trying to turn the Indians against them by promising to supply them if they will attack the Georgians. The letter mentions the involvement of James White and (John?) Galphin in these affairs.
Digital image and encoded transcription of an original manuscript, scanned, transcribed and encoded by the Digital Library of Georgia in 2001, as part of GALILEO, funded in part by a grant from the Institute of Museum and Library Services.
Local Identifier:
tcc673
Metadata URL:
https://dlg.usg.edu/record/dlg_zlna_tcc673
Digital Object URL:
https://dlg.usg.edu/record/dlg_zlna_tcc673#item
Language:
eng
Bibliographic Citation (Cite As):
Cite as: [title of item], Telamon Cuyler, Hargrett Rare Book and Manuscript Library, The University of Georgia Libraries, presented in the Digital Library of Georgia
Extent:
4 pages/leaves
Original Collection:
Manuscript held by the Hargrett Rare Book and Manuscript Library, The University of Georgia Libraries, Telamon Cuyler, box 01, folder 11, document 06.
Holding Institution:
Hargrett Library
Rights:


Buzzard roost
1st. May 1787
Sir
Your dispatches to the honle. [honorable] James White arrived here Several dayes agoe [days ago] by the two hostages, which in his abssance [absence] I made bold to opened, I need not trouble you with any -- information with respect to runing [running] the Line as I make no doubt but Mr White the Superintendant [Superintendent] has made you fulley [fully] acquainted with the Situation of matters in that respect as he made him Self fully informed of Every part of that business that was necessary. what your honnour [honor] mentions aboute [about] the horses I shall pay the Stricktest [Strictest] attention to, that if possible they may be Gathered for wich [which] purpose I yesterd [added text: ay ]


Page: [2]
dispatched of a man to the town and, Shall be in there my Self in a few days, have likewise wrote to Mr McGillivary acquainting him that the Indians are acting quite contrary to what he promised Mr. White, wich [which] was that the indians Should commit no insults on the Settlements on no pretence for four months, I expect he will Send down to have them delivered up, the Buzzard roost and cussetaws has promised me if they will not deliver them up that are in the cowetaws, that they will goe [go] over in a body and take them by force, wich [which] I hear is ten he [added text: a ] d the big half breed in the [unclear text: oakefuskes ] upper creeks has likewise Sent word down that he will have all that is in his town gathered wich [which] he Sayes [Says] were brougt [brought] in there while he was from home, wich [which] was while the Superintendant [Superintendent] was in the nation, I think Chief of the horses may be gathered


Page: [3]
if a proper talk is Sent up by return of Mr. Galphin, which he and I will doe [do] Every thing in our power to compleate [complete], I have made the Indians fully acquainted with your requesting the return of the horses, and likewise concerning the act respecting the land, which they were much pleased at, and the Buzzard roost Seem to Express concearn [concern] that the line was not fixed uppon [upon] when Mr White the Supperdt [Superintendant] was up. nothing perticular [particular] has accur [added text: e ] d [occurred] to me Since Mr White left the nation I am amased [amazed] at the [unclear text: pleasant ] behaviour [behavior] of the indians wich [which] I can put no other construcktion [construction] on, but that it is all thro [through] the insinuation


Page: [4]
of the Spanards, wich [which] I belive [believe] wants a war with us and means to begin it in this quarter, as it is beyond a doubt that they have promised the indians all the assistance they may Stand in need of to oppose us. I Shall waite [wait] in the nation till the return of Mr. Galphin ready to Execute any business your honnour [honor] may think proper to have done at that time after that Shall Set of [off] down for augusta when Shall doe [do] my Self the pleasure to waite [wait] on you honnour [honor]
till then I remain Sir Your honnours [honor's] most Obdt [Obedient] and very humble Sert [Servant]
[Signed] Timy. [Timothy] Barnard 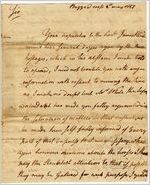