Collection:
Southeastern Native American Documents, 1730-1842
Title:
[Letter] 1787 Aug. 1, Flint River / Tim[oth]y Barnard
Creator:
Barnard, Timothy, 1745-1820
Date of Original:
1787-08-01
Subject:
Creek Indians--Claims against
Location:
United States, Georgia, Decatur County, Flint River, 30.7088028, -84.8638097
Medium:
letters (correspondence)
Type:
Text
Format:
text/html
image/jpeg
Description:
This is a letter dated August 1, 1787 from Timothy Barnard, an Indian trader and, by some accounts, an agent to the Creeks (possibly written to George Mathews, Governor of Georgia, 1787-1788) detailing troubles between the Cusseta (Creek) Indians and white settlers. Barnard relates the tale of two white men, identified only as Jones and Jarvis, who arrived at the Cusseta settlement at Buzzard Roost on the Flint River and told the Indians there that they had just seen 600 men near the Oconee River who were preparing to march against the Cussetas. The Indians were enraged and killed both Jones and Jarvis, only to learn soon thereafter from a slave who had accompanied the two men that they had made up the entire tale. Barnard goes on to detail troubles between some French traders and various Indians in Georgia. He also describes a conference that he attended along with (John?) Galphin, interpreter James Durouzeaux, and Creek leader Alexander McGillivray and warns of future trouble for frontier whites.
Digital image and encoded transcription of an original manuscript, scanned, transcribed and encoded by the Digital Library of Georgia in 2001, as part of GALILEO, funded in part by a grant from the Institute of Museum and Library Services.
Local Identifier:
tcc671
Metadata URL:
https://dlg.usg.edu/record/dlg_zlna_tcc671
Digital Object URL:
https://dlg.usg.edu/record/dlg_zlna_tcc671#item
Language:
eng
Bibliographic Citation (Cite As):
Cite as: [title of item], Telamon Cuyler, Hargrett Rare Book and Manuscript Library, The University of Georgia Libraries, presented in the Digital Library of Georgia
Extent:
4 pages/leaves
Original Collection:
Manuscript held by the Hargrett Rare Book and Manuscript Library, The University of Georgia Libraries, Telamon Cuyler, box 01, folder 11, document 04.
Holding Institution:
Hargrett Library
Rights:

18th augt [august] 1787
Sir
While I was down in augusta, with your honn [added text: our ] [honor] express from the nation, one Jones and Jarvis arived [arrived] at the buzza [added text: rd ] roost from the Settlements of Georgia, and told the indians Such tales that put the whole nation in such a ferment that -- had like to have prove'd of fatal consequence, to the fronti [added text: ers ] of georgia, which was as follows, they told the indians that they had left Six hundred men near the oconee ready to march up against the buzzard roost, and that they had had them prisonors [prisoners] but that they had broke loose from them, to bring up the news, they likewise told them that the two men that they thought were carried of [off] priso [added text: nors ] [prisoners] were killed, after they had been prisonors [prisoners] two days. Tho [Though] they told the white people the [they] were cussetaws and that they were murdered in a very cruel manner this I have Strove to conterdict [counterdict], but without Sucksess [Success] this Story Inraged [Enraged] the Indians much, they immediate [added text: ly ] put Jarvis and Jones to deth [death], and took what they had amongst wich [which] was a negroe [negro] boy wich [which] they had Stole from near augusta, on hearing this news there was runers [runners] Sent of [off] to goe [go] all night and alarm the whole nation, and in twenty four hours after the news got into the nation, there was for [four] hundred men ready to march, six from the lower creeks, and Eight hundred from the upper but Just as they were Starteing [Starting] they thought fit to examine the negroe boye, wich [negro boy, which] told them that what Jarvis & Jones had related were all false, and that they had Seen no men from the time they had left near augusta till they come over the oconee, wich [which] they had traveled in one night, and that he had heard Jarvis and Jones Say they


Page: [2]
would tell the Indians this Story to Save themselves. this put a Stop, to all as they Said they had promised me that no mischef [mischief] Should be done till I returned from augusta, nor not then if they had a talk to please them from there, this Expectation by what I can Learn and by what will appease by there [their] talk now, was th [added text: a ] t they would have Satisfaction for there [their] people that were Killed, but I Still belive [believe] that if the two last Indeans [Indians], that were Killed, near the rock landing had not been Killed as they heard they were after being Carryed [Carried] Some distance, they would have [unclear text: Strove ] to have moderated matters without demanding Satisfaction, they doe [do] not know yet ritely [rightly] how they were killed, and I have Still kept it from them, as if they knew they would be the more inraged [enraged], Still as Soon as they were convinced by the negroe [negro] boy that there was no people marching against them, they Sent runers [runners] all over the nation, to Stop all the indians from goeing oute, wich [going out, which] the cussetaw people afected [affected] with Great difficul [added text: t ] y, so if any sculking [skulking] party Should goe oute [go out] it entirely proceeds from Jones and Jarvis false reports, wich [which] they have paid dear for, at the very Junckture [Juncture] when the upper creeks were Stopped from comeing [coming] this way, by the cussetaws there come in a runer [runner] from the cheroke river that one hundred and thirty of the cumberland people pilated [piloted] by two chickesaw Indins [Indians] , had marched agains [against] Some french trader that


Page: [3]
had felled a tradeing [trading] house below the mussel Sholes and the cheroke river, and killed Indians and all that fell in there [their] way, those were killed were two creeks, one a lower and one an upper creek fellow, two northward indians, two chickesaws, their friends two french men, Six chero [added text: kees ] and caried of [carried off] Several cheroke women and children prisonors [prisoners], the Slaughter would have been much greater but they were aprised [apprised] of the white peoples march a few owrs [hours] before they come, and part of the french and Indian got over to and [an] Island, with there [their] goods before the cumberland people ariv'd [arrived], chief of what they Killed were laying aboute [about] drunk, at the time, and could not be got away, the, upper towns indians as Soon as they herd [heard] this, and were Stopt [Stopped] from comeing [coming] this way, a large party of them pushed of [off] immediately for cumberland, and its thougt [thought] will breake [break] up that Settlement, if they are not forted, wich [which] I Should Suppose they are as they must Expect an alarm, as they have Killed all withoute distinktion [without distinction], as Soon as I got back to my own house, on flint river, were [where] my people were all fled from, and carryed of [carried off] and left [unclear text: chief ] of my horses, and Scattered all my goods aboute wich [about which] I Shall [unclear text: neare ] git [get] again, I hired a horses from an indian and proceeded to the cussetaw town, with your honnours [honor's] talk they immediate [added text: ly ] Sent for Mr McGillivary, and had the towns colected [collected] before they would give an answer, wich [which] is here inclosed [enclosed] I was presant [present] mr Galphin and

1 August 1787 -- T. [Timothy] Barnard Mr Duruzeoux, the Interpreter, these are the Express words, in there [their] answer wich [which] they desired Mr McGillivary to write, and I am very Sure if he had told them to ask no more, for satisfaction but goe oute [go out] and take it, they would have done it, but I intemated [intimated] to him that it would be beter [better] for both partyes [parties], to Send down a talk wich [which] he readyly [readily] assisted in puting [putting] forward, but your honnour [honor] may now rely on it, that as they have taken it in there [their] heads they will have Satisfaction, or take it, this I am certain is no more of Mr McG-y [McGillivray] s as I heard there [their] minds on this head, before, he come down, they told me as Soon as I went in, before Mr McG-y [McGillivray] come down, that they Expected their friend the white people would as they did not take satisfaction rashly, that they would give it themselves, it Seems Mr. Galphin neglected puting [putting] Something in the talk I took down to that purpose, as I have now acquainted your honnour [honor] with Every perticular [particular] circumstance, that occurs to me at presant [present], and as I guess that Giveing [Giving] them the smallest satisfac [added text: tion ] from that Quarter will be thought oute [out] of the Question, my advise [advice] is to all the frontiers to fort the women and children as if they doe [do] not Some of them will [deleted text: [illegible text] ] [added text: Sufer [Suffer] as I am Sure ] they will turn oute [out] and take Satisfaction, as Soon as they find they are not to git [get] it withoute [without], as I could find when in the nation, that the minds of the indians are much agitated, there is no time to be lost in leting [letting] the people on the frontier know this disagreeable news, nothing more newes [news] to me at presant [present] therefore begs this Express will be dispatched back as soon as possible
and remain with due respect your honnour [honor] most obdt. hbl Sert [obedient humble Servant]
[Signed] Timy [Timothy] Barnard 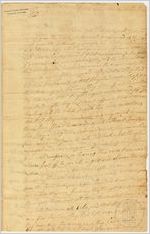