[ Note: A postmark appears on the left side of the page.; WASHn [Washington] Ga.
APR 9 ] 40
His Excellency Wm [William] Schley Govr. of Geoa [Georgia] . Milledgeville


Washington
March 30th 1837
Dr [Dear] Sir,
Your "Circular" of 17th Inst [Instant] has been duly received, in which you desire my opinion on the 4th Sec [Section] of the act of the last cession [session] of the legislature, entitled "An act to provide for the payment of volunteers in this State" &c&c [et cetera et cetera], which Section, as appears from said circular, is as follows.
"And be it further enacted that the said commanding officers of companies shall state upon their muster rolls what property of said company may have been lost in battle or in the immediate pursuit of the Indians, or while employed in actual service, together with a Statement of the value and the name of the owner; and Shall transmit likewise to the governor, such testimony as the claimant may furnish to him of the loss and value thereof- It shall be the duty of the governor to pay the Same, Provided that the provisions of this act shall not extend beyond the loss of horses and equipages and waggons [wagons], and wearing apparel of the soldiers " -- Concerning the interpretation of which section, the following questions are propounded.
"1st What did the legislature mean by the words ' while employed in actual service '? Did they intend that the governor should pay for every horse which died or was lost in the Service, no matter from what cause, or did they mean that these words should comprehend cases of death or loss from some extraordinary service or


Page: [4]
Cause, which would not be embraced in the words lost in battle, or in the immediate pursuit of the Indians
2nd What construction do you place on the words 'wearing apparel of the soldier'? Did the legislature intend that all accounts for wearing appearrel [apparel] lost, should be paid without regard to the quality or value of the articles, or that only such account should be paid, as would cover the cost of such clothes as a Soldier is allowed by law?"
As to the first question propounded, it may be remarked that the act seems to contemplate that there are three cases in which remuneration must be made, two of which are plainly defined, and the other is rendered doubtful on account of the uncertain meaning of the words "while employed in actual service" -- If these words stood alone, the difficulty would be greater than it is - But by the enumeration of [added text: two ] particular cases, immediatly preceeding [immediately preceding] (to wit, [deleted text: whe ] property lost in battle, and in the immediate pursuit of the indians) it seems that the third was added [added text: as ] another particular or extraordinary case to be provided for-
If the legislature intended that all property lost [added text: by a volunteer or Soldier ] after entering the Service, should be paid for, why [deleted text: did ] did they go on and mention two cases that must have necessarily been included in the last provision -- It would have been nothing more nor less than enacting that all [deleted text: property ] horses & clotheing [clothing] lost by the soldier after entering


Page: [5]
the service should be paid for, and also all that should be lost while in [deleted text: actual ] "battle or in the immediate pursuit of the Indians"- The section thus transposed appears very awkward, not to say absurd; yet it is what the legislature have said, if by the words "while employed in actual service," they meant to include all the time interveneing [intervening] between thir [their] entering and dismission from service
If however the legislature have plainly enacted a foolish or absurd section it Should be strictly enforced- But if every [added text: clause in the ] section may be made to take effect by giveing [giving] it a sensible construction, it is reasonable that the later course should be pursued.
If they had intended to pay for all horses and clotheing [clothing] lost, at any time, [deleted text: or ] on any occasion, after entering the service, would not that body have said so in some simple and short words? But when they [added text: have ] enumerate two cases that may plainly be distinguished from other losses, that might have happened in the Service, and immediately follow them by another case, it is reasonable and agreeable to common [added text: sense ], and to the usual mode of expressing our ideas, to say, that the latter was intended, like [deleted text: wise ] the first two, as an enumerated case of extraordinary service ; provided the language does not [illegible text] such a construction. And the language, so far from [deleted text: from ] forbiding [forbidding], upholds such a construction; as I will


Page: [7]
I have but little doubt that the legislature had in view such extraordinary cases which can be better judged of as they may [unclear text: arise ] -
Your second question may be answered in fewer words than the first -- It may seem unreasonable to [added text: [unclear text: you ] ] that the legislature should grant pay for the loss of a suit [added text: of clothes ] worth a hundred dollars when [deleted text: fifteen or twenty ] one of the value of fifteen or twenty [added text: [deleted text: dollars ] ] would have been [deleted text: of a reasonable service to the Soldier ] [added text: such as the Soldier would have been entitled to ] -- On the other hand something may be said in favour [favor] of granting pay for the loss of a costly dress- But I take it our business, or rather your excellency's, is not [deleted text: [illegible text] ] with the reasonableness or unreasonableness of the act. If the legislature have made known their will in plain and intelligible language it must be executed; though [deleted text: contrary to ] its policy be contrary to the views of the judicial officer who puts it in practice --
The words [unclear text: wearing ] apparrel [apparel] are very explicit and whatever comes under that description, is included in the section
If the legislature intended any particular kind of wearing apparrel [apparel] they should have said so; but not haveing [having] done so, it is not for the officer who judges of its application, to say that they did intend, what he thinks they should have [deleted text: intended ] enacted-
I know that there might be some


Page: [8]
quibble on the word "soldier", as distinguished from the citizen, but any such distinction [added text: in this case ] would appear to me but a quibble -- For it does not appear that it was used to designate the kind of clotheing [clothing] [added text: which ] should be paid for They were speaking of "the soldier" & it was necessary and proper to use that term; let them intend what they would about the kind of clotheing [clothing] to be paid for -- I take the language as I find it & will [added text: not ] force a meaning on it when there is a plain one that must strike every one who first reads the clause, which provides for the "wearing apparrel [apparel] of the soldier" I am therefore of opinion that "the legislature intended that all accounts for wearing apparrel [apparel] lost Should be paid without regard to the quality or value of the articles" If it was wearing apparrel [apparel] they have said it must be paid- 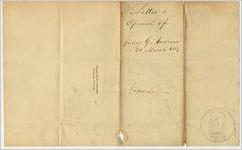