[Letter], 1760 Feb. 9, to the king's beloved men and head warriors of the upper and lower Creek Nations

Collection:
Southeastern Native American Documents, 1730-1842
Title:
[Letter], 1760 Feb. 9, to the king's beloved men and head warriors of the upper and lower Creek Nations
Creator:
Georgia. Governor (1757-1760 : Ellis)
Date of Original:
1760-02-09
Subject:
Creek Indians--Government relations
Cherokee Indians--Claims against
Georgia--Politics and government--to 1775
Location:
United States, 39.76, -98.5
Medium:
letters (correspondence)
Type:
Text
Format:
text/html
image/jpeg
Description:
In his letter dated February 9, 1760 Henry Ellis, Royal Governor of Georgia urges the Creeks to fight with the English against the Cherokees. He discusses the history of English-Creek relations, telling the Creeks that they have promised loyalty to the English and that their trade and safety are contingent upon continued friendship with the English. Ellis claims that the Cherokees are the enemy of the Creeks and that the Creeks must remain loyal to the English.
Digital image of original manuscript, scanned by the University of Georgia Libraries in 2000, as part of GALILEO, funded in part by a grant from the Institute of Museum and Library Services.
Local Identifier:
tcc262
Metadata URL:
https://dlg.usg.edu/record/dlg_zlna_tcc262
Digital Object URL:
https://dlg.usg.edu/record/dlg_zlna_tcc262#item
Language:
eng
Bibliographic Citation (Cite As):
Cite as: [title of item], Telamon Cuyler, Hargrett Rare Book and Manuscript Library, The University of Georgia Libraries, presented in the Digital Library of Georgia
Extent:
4 pages/leaves
Original Collection:
Manuscript held by the Hargrett Rare Book and Manuscript Library, The University of Georgia Libraries, Telamon Cuyler, box 38, folder Ellis 35, document 01.
Holding Institution:
Hargrett Library
Rights:


To the King's beloved Men and Head Warriors of the upper and lower Creek Nations
9th of February 1760
Friends and Brothers,
When I came first to this Country, I brought the Great King's Talk with me, which I delivered to you two years ago. -- The Great King Charged me to take care of you; to hear your Complaints, to do you justice; to be kind to you, and in all things to treat you as his Children, and my Brothers. -- I put the King's Words in my Heart, [unclear text: by ] that I never once forgot them, I call yourselves to Witness
When you Met me last we mutually renewed our old Treaties, settled all differences then [unclear text: depending ] ; strengthened and Brightened our Chain of Friendship; and made the path straight between us. -- You then declared we should be one people for ever; you engaged -- that our Friends should be your Friends, and our Enemies, you would treat as your Enemies. -- I have not sent you one bad or Bloody Talk since I have resided here. I have had no Quarrel with the red People; I never desire to have any. We live upon one Ground; I wish it may be kept white; but my Good Dispositions cannot, it seems, secure my People from Troubles. -- In the beginning of Winter some Head men of the Cowetas and Cussetas came to see me, I told them the Cherokees intended to do Mischief and Bloody the path with the White People; that your hunting grounds lay in this Province, and your People were always Amongst us; that if the Cherokees should unprovokedly spill the Blood of my People, we should be obliged to revenge it: And as we could not distinguish between the Indians of the two Nations, I was afraid some Creeks would be killed by Mistake, instead of Cherokees; And therefore desired you would not suffer the Cherokees to do any


Page: [2]
Mischief on this side of the Savannah River: and as the Cherokees Quarrel was only with the the People of Carolina and the other Provinces, I forbid your Friends going on the other side of that River, least [lest] they might be destroyed as Enemy Indians. -- The Head Men of your Nation accepted my Talk; and promised, that if the Cherokees disturbed the People of Georgia, or spoiled your Hunting Grounds therein, they would resent it by making War upon them; I was satisfied with this promise and depended upon it. -- Your beloved Men then told me that some of my People had settled beyond our Limits, and desired they might be removed; I readily complied with their request, and delivered them my Orders for that Purpose, to carry to those Settlers; which they did, and my people obeyed them. In this just and Friendly Manner, I have always behaved to the Creeks: I never turned my back upon them, nor suffered them to leave me with empty Hands, or troubled Hearts; I hope you will now remember these things, and act accordingly. -- The Cherokees had no Quarrel with me; how the present Troubles with them began, I need not relate, for you know already, but I ought to tell you, that they lately made a Treaty of Peace with the Governor of Carolina; and bound themselves therein, to give full satisfaction for some white people they had recently killed. -- This Treaty the governor was willing to believe they would observe and perform; but, agreeable to their usual Treachery, he no sooner turned his back; than they broke out War; murdered their Traders; and fell upon the back Settlers, who depending on that Treaty, were unguarded, apprehending no danger; many of them they have killed, with their wives and Children; and to spoil your Good name, and bring Trouble upon you; they have every where called themselves Creeks: and, even in defiance of what the Head men of your Nation Engaged to Me concerning


Page: [3]
the Cherokees; they have likewise come into this Province, and killed several White People. -- This is what compells [compels] me to call upon you at Present; I do it for your sakes as well as our own: It is impossible our People can carry on their Trade with you unless you protect them from their Enemies. -- While we are [unclear text: thus/ disturbed ] it is impossible you can hunt in these parts, without being exposed to danger: for our Warriors will soon be out; and the Cherokees say, they will kill some of your People, and make you believe the white People did it. Your Fathers were wise Men; they held fast by the English; they desired to do the same, hitherto you have done so, and no mischief has come upon you. You will not now I hope turn fools and mad; you will not give up your Trade; spoil your Name; suffer yourselves to be interrupted in your Hunting Grounds; expose yourselves, and your Families to Danger, bring Trouble upon your Nation; forsake your Friends; and forget your Promises, for the sake of the Cherokees, your old Enemies; who still hate you in their Hearts: on the Contrary, if you would show yourselves Men, Friends to the English; to your-selves, to your Wives, and to your Children; you will join with us upon this Occasion to punish the Madness and Treachery of the Cherokees. This will make your Name dear to Us; This will prove you Brothers indeed! This will make the Great King and his beloved men stand by, assist, and regard; You, and your Children; in War, and in Peace; as long as the Sun shines, and the Rivers run into the Sea.
Brothers and Friends, I never threw your Words away, and I earnestly desire you will not cast away mine: but accept my Talk; and Take up the Hatchet in Defence of the white People, agreeable to


Page: [4]
your own Interests, and the Many Treaties you have concluded with them: The Spirits of your Friends & country Men formerly murdered by the Cherokees, are not satisfied; and the Blood of our People Cries loudly for Revenge. -- If you want any thing to begin with, I have ordered the Traders to supply it: So I bid you Farewell 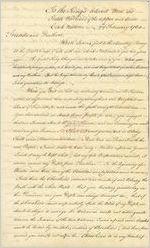