[added text (appears to be different ink and hand): S. [Samuel] Worcester ]
Salem,
Nov. 15. 1815
Rev. William Jenks
Dear Sir,
The [unclear text: Presd. ] Comee [Committee] have been in session to day [today], & your letter of 20 inst [instant] was submitted to consideration. I am authorised [authorized] to state to you that "the plan" which you had the goodness to "detail" to us, is regarded by the Comee [Committee] as a noble & important one, worthy of earnest attention & great effort, & such as the Comee [Committee] would certainly wish to encourage & patronise [patronize] as far as consistently with the proper objects of the Board they could. This Board however is limited by charter, to "the purpose of propagating the gospel in heathen lands, by supporting missionaries & diffusing a knowledge of the Holy Scriptures." It hence became a serious question with the Board, whether the Indian tribes within the United States & their territories were within the limits of our charter. This question has been determined in the affirmative. The Indian Tribes, but no other people of these States & territories, are regarded by the Board as coming within the description of "heathen lands." It is therefore the judgement of the Comee [Committee] that it would not be competent


Page: [2]
for them to patronise [patronize] the plan proposed by you any further than as it relates to the Indians. The plan contemplates attention to the "Indian languages" at the proposed "Collegiate Institutions". The "reducing of them ultimately to writing," & the use of them in preaching the gospel & communicating the Scriptures. This object falls properly within the consideration of the Comee [Committee] but in regard to it they wish for further information. They are not certain that it will ultimately be judged expedient to have much to do with the Indian languages. At present [unclear text: indeed ] they strongly incline to the opinion, that an extended plan upon Mr. Blackburn's model as stated in their late annual report, published in
The Panoplist for
this month
, promises much greater & more [unclear text: durable benefit ] that is. The plan of teaching the Indians The English language, & using this language as the vehicle for imparting to them the blessings of christianity & civilization. The question however is still open for consideration: & to this question the projected exploring mission is to have a particular reference.
In regard to this exploring mission, I am authorised [authorized], to state, that though the objects of it are fixed, the manner of conducting it may [unclear text: be ] modified as circumstances shall seem to require, or to render advisable. I regret to inform you this, owing


Page: [3]
to particular circumstances Dr. Taylor has relinquished for the present his missionary purpose. Mr. Smith has no connexion [connection] with our Board, but is [unclear text: gone ] with a commission from the [unclear text: Mass. Miss. Soc. [Massachusetts Missionary Society] ] by the way of New Orleans to Natchez, where he has a prospect of being settled. [unclear text: Mr. Kingsbury ] is [unclear text: gone ] to Tennessee with a commission from the [unclear text: Con Miss., Soc. [Connecticutt Missionary Society] ] . He however holds himself engaged to our Board. To be employed in our service as we shall direct; & it is his particular desire to impart the gospel to the Indian Tribes. We [unclear text: have ] none besides him on whom we can at present depend for this service. Could another be engaged to take the route marked out in my last letter to you, [unclear text: Mr. Kingsbury ] might be [unclear text: directed ] to join him at some appointed place, & together [illegible text] [document damaged] [illegible text] with him [unclear text: further ] the objects of the mission [document damaged] the manner which might be deemed most advisable. We have supposed that it might be safe to set out on the mission early in the spring & proceed to St. Louis, & there & in that quarter to remain, until the proper season for going further south.
It is the opinion of the Comee [Committee] that should you see fit to engage in the design. This proposed missionary tour would afford you very favorable opportunities for making [unclear text: inquiries ] & arrangements in regard to your great western object,& that it would not be difficult to settle in plan of the mission which would at once answer your purpose & [unclear text: ours ] . 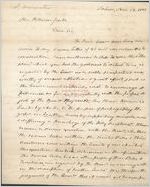