Salem
Sep. 25. 1815.
[unclear text: Rev ] & dear Sir,
When I wrote in June my brief letter, in acknowledgment of your [unclear text: favour [favor] ] of
May 24, it was my expectation, as then instructed, to have it in my power to write you again & more at large, at a much earlier day than this. But special circumstances have prevented. Immediately after our plan was settled for a mission to the West & South, Mr. Warren one of the appointed missionaries was seized with an illness, which held the business for a time in anxious suspense [unclear text: & ] finally [unclear text: disarranged ] the plan. I was then myself taken with a severe illness & since my recovery I have thought it best to wait until the meeting of the Board, before I made any further communication to you.
I am now happy in being able to assure you, that the design of a western & southern mission though providentially hindered, has not been abandoned. The design was laid before the Board, at our annual meeting the last week & entertained by them with very great interest. The plan is, to send a mission to consist probably of two persons, with instructions to visit first the Stockbridge Indians in the State of New York; Thence to press on to the [unclear text: Wyandots ], Delawares, & other tribes in the neighborhood of the [unclear text: lakes ] ;


Page: [2]
thence down to St Louis & other places in [unclear text: that ] territory; & thence to the Cherokees, Chickesaws, Chocktaws, & perhaps Creeks in the South. The primary object will be, to make inquiry & obtain information, relative to the state of the Indian Tribes, the best measures to be adopted for imparting to them the blessings of Christianity & civilization; & the encouragement for adopting & prosecuting such measures. -- Two systems present themselves to contemplation for the instruction of the Indians: one that of communicating the gospel to them in their own languages; the other that of communicating it to them in our language. Our views respecting the latter system Dr. Appleton will be able to explain to you more fully than I can well do in a letter, & to him I beg leave to refer you upon this subject. The former system is your own. It will be an important part of the inquiries to be instituted to ascertain as fully & satisfactorily as possible, which of these systems would promise the best success, [deleted text: & ] whether one of them should be preferred for some of the tribes, & the other for other tribes; or whether with reference to all or any part of the tribes they should be combined.
From this imperfect outline you will readily perceive that the persons to be employed on this mission should be possessed of no ordinary


Page: [3]
qualifications. They should be persons of sagacious observation, of comprehensive views, & of sound judgment; not visionary theorists, but practical men; capable of directing their inquiries judiciously in regard to Indian customs, dispositions, manners, & languages; of collecting & embodying facts; of [unclear text: conveying ] inquiries & facts into solid results; of conciliating extensively, & securing the confidence of the people, both white & red, & preparing the way in various respects for important [unclear text: ulterior ] operations.
We have one person in view for this service, [unclear text: Dr. Taylor ] a practising physician at [illegible text], now engaged to us as a mission [document damaged] gentleman in whose talent, & piety & wisdom [document damaged] we have great confidence. Another of at least equal qualifications will be wanted. Probably the mission cannot be sent out under several months; but it is desirable to be making preparations for it with all convenient dispatch. Any help which you can afford us towards this object, either in the way of information or otherwise, we shall gladly & gratefully receive. 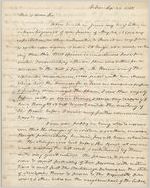