St. Marys
March 3, 1813.
Dear Father,
I shall direct this to S. Ward Sr., expecting if you are in New York he will hand it to you ; or if you are not there that he will observe the contents.
I have written you repeatedly concerning the taking of Mr Pendleton's testimony ; so that but for the repeated miscarriages of the mail I should not doubt your being in possession of every necessary memorandum on the Subject.
Mr P. must be kept strictly to the questions or Interrogatories ; and the Commissioners will have to report an entire precise account of whatever is testified before them.
Of course whatever is stated before them by Mr. P., or any other witness must be under oath administered by the Commissioners.
If copies only of the letters can be had, it will be the business of the Commissioners to superintend their authentication.
The copies will be authentic provided Mr. P. delivers the originals to the Commissioners under oath, and Witnesses other than Mr. P. testify that the signatures are well known to them and genuine. The Commissioners will compare the copies with the originals and in their Report [illegible text] they will connect the Copies certify the authenticity

I am very desirous this testimony should arrive in all
April at Savannah, as without it we must lose the May Term.
I presume the Commission was forwardd. [forwarded] the 25th Ulto. [Ultimo] to the case of L.W.P. .

I was at Nats' plantation day before yesterday, and by accident he was there too. He is building a House, and from his proceedings otherwise I foresee he will soon create accounts [unclear text: against ] him that will eat up his crop. He has repeatedly declared he intended to remit the whole proceeds of it to you, say 1000 $.
He has not touched preparing it for market, and told me he was to give it at his Mother's after the rest. I expect him to be [unclear text: wheedled ] along untill [until] I am gone, and then his cotton sold by her agent in Savannah under verbal promises between Nat & her and her written directions to her Agent in such a manner as that She may get it.
I think you had better write to Nat to deliver me the Cotton as it is, to be ginned &c [et cetera] on his account.
I mentioned in my last my having [unclear text: rented the Residue ] of the building in which L.C. has his store at 15. $ pr. Mo. [per Month] to the Army Contractor. Only one of [deleted text: the ] [added text: your ] tenements is vacant; and that applied for.


Page: [3]
A valuable Prize bound from Demerara to London came up to town yesterday with the pilot boat Schooner Privateer Hazard that captured her. Carys [Carries] principally Sugar ; the Ship rising 300 tons. The Privateer carries 28 men and only 3 guns. It is not doubted that she has a French Commission as well as [added text: an ] American one. Yesterday she had the French Flag flying at the foremast head. Of course she uses the American Commission when it suits her. and under the French She can capture Spanish vessels. It is stated of her whole ship's company there is but one American : they are obviously French.
At every low valuation the prize is worth her 60000. $. one article of the Cargo is 400 hhds [hogsheads] sugar.
In any other times than these the Ship would be valua [document damaged] Like most British Merchant Ships she is very burthensome [burdensome]
You will have seen the account of the late expedition of the U.S. Troops of this Quarter and the Tennessee Volunteers against the Seminole Indians in Florida. About 600 men encountered a very inferior unsuspecting force in their Towns. There was a manifest disposition in these Indians to be quiet. It is not unlikely they will undertake to retaliate. The Tennessee men are daily leaving this for home.
I consider the transaction at best a very irregular one in no degree necessary to or compatible with the Interest or honour [honor] of the Country at large.

You will forward the copy of Catharine Miller's Bill vs Nathaniel Pendleton, with a proper authentication by the Chancellor of the Court.
The one here cannot be used from the want of that form I do not send it as a new Copy will cost little different from the expense of Postage; and the copy is wanted for reference to by [unclear text: Y. ] Council. 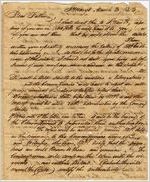