Athens February 21st 1856
My Dear Sister
Although I have not received a letter from you as yet -- in reply to one I wrote you giving you immediately on my arrival at home a full description of my trip out from the time I left your house until I set foot on the platform at the Athens Depot -- also telling you what was the only arrangement you could make with Old [unclear text: Gallaher] -- & so on but perhaps you may have received this & I will be repeating only what I have once written -- Then again it might have taken the direction of one that Charlie wrote me telling me all of his secrets which never reached me -- He says

if you got it after I left it is all right -- but it will forever [added text: near] kill him if it finds its way to the dead letter office -- Have you received your [unclear text: grafts] yet -- Mr. Cobb fixed them up for me -- I sent every nice variety on both Mr. Cobb's & our places Jim Camak has not been here since I got back -- & old Mrs. Camak nor Anna know which from which so I could not get any from them -- I believe I mentioned in my other letter how old Mr. Welch & [unclear text: Mareisa] cried when I gave them -- your presents -- which were the best thing in the world -- you could have sent them -- they were at Sister Marion's yesterday & had another cry over you -- I dont [don't] think they think there is another person in the world like you

Before this reaches you -- you will have heard of the melancholy end of Toby Cox -- Mr. Cobb got a letter from Mat yesterday Toby shot his wife whilst she was sleeping -- then laid down before the fire & shot himself through the heart -- Mat seems to feel very much -- as does Col [Colonel] & Mrs. Billups -- Toby left a will which Mat intends to carry out -- giving Mrs. James of Lexington most of his property -- So Report says -- I suppose Will & Joe have both given you an account of Mrs. [unclear text: Venable] the wife of the new Professor. He was married just before he left Virginia -- She is the daughter of Ex Gov. [Governor] McDowell a great many think her much prettier than either Mrs. Craig

or Mrs. Leconte -- I do not myself. I saw [unclear text: Orrie Ware] two or three night [nights] since She told me [added text: she] intended writing to you soon -- to thank you & the Baby for your presents I told her you had about a dozen beaux for her. Who were coming out to see her this summer. I am sorry I did it for she will [illegible text] the old Dr, to [illegible text] -- not having any better sense then to think I was telling the truth, Pa has not returned from Macon yet -- it has been over six weeks since I have seen him -- Sister Lucy is quite sick. She is affected like she was [unclear text: late] summer but a great deal worse -- Ma & Sister Marion feel quite uneasy about her -- I hope she is not as bad off as they think her Mr. [unclear text: Gerdine] is still in Mississippi I believe he was to have [illegible text] this time -- the rest of the families are all [added text: well] both at [unclear text: troups] & [illegible text] 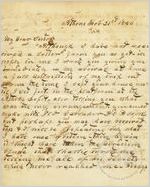