A happy New Year to you my dearest sister & to yours -- how sincerely do I wish it for you! We have had much during the past one to give us pain & yet may it not prepare us better for that happy land where seasons & years are never known -- but an eternity of peace & happiness is even now realized by those for whom we have so sorrowfully mourned -- How blest [blessed] their lot compared with ours -- for should my wish be realized for you how varied will be that happiness -- Perhaps again many sorrows may await us we know not. God grant that we all may be enabled to view them aright -- & that at last they may prove those blessings for us which

shall help [added text: us] to obtain that "eternal weight of glory" which only those do find who have "gone up" to it through "much tribulation" Excuse this outburst at the beginning of the new year -- I never realized as fully how near we were to each other and I never felt so strong a desire that our lives might be such as to unite us even more fully hereafter -- God grant it my only & dearest sister! Christmas has passed & like yourself we had many causes for excitement but none for real danger Joe was more alarmed than almost any other person & we had several hearty laughs at his expense Our negroes were much alarmed and consequently the Christmas was a dull one to them -- Poor [unclear text: Fanny] has not yet walked a step

& her intended marriage makes her trial still more sad -- Annie Erwin is yet with us & such romps as she & the boys have every night you never witnessed -- Yesterday as the necessary result of such romping I sent a waggon [wagon] load of furniture to be mended & I am doubtful how much will be left when she [deleted text: she] leaves -- Mr. Gerdine & Will come over every night & you know they are pretty merry of themselves -- I have sat in the corner for the last four weeks with the most violent cold I ever had combined with sore throat & dyspepsia -- I wonder I have kept up as I have -- Today it has settled in my teeth and I am still suffering a great deal but I could not forbear writing Rosa Crawford has been

very ill with a cold & is still confined to her bed & fears her marriage will be put off on account of it. Mrs Craig seems to be quite a belle again and Herdy [unclear text: Phinizy], Alley Crawford & several others are quite devoted to her. I have somewhat suspected Mr. Gerdine but this must be [unclear text: inter nos] altogether -- He talks a great deal about her and seems to love to be teazed [teased] about her as he often is -- There is quite a moving going on in the town -- The new professors getting into their houses -- new stores being erected &c [et cetera] -- Mr Cobb made quite a bargain yesterday -- one which he has long had in view & which he begged Will or Joe to join him in but they did not

He bought out Herrys for $12.00 & a part of Whites for the same price -- He intends putting up two nice stores for rent & every one thinks he got a great bargain Indeed he was offered $100 for it as soon as made -- One object he had in view was to get Charlie into the shoe store with Sydney Reese as a partner & I think he will accomplish it. Reese does a fine business here & Herry having sold out many are desirous for the place -- It is busy time settling accounts and I rarely see Mr. C [Cobb]-- -- 'tho [though] he is at home -- Many of our girls are in Montgomery -- amongst them Annie [unclear text: Camak] -- Mrs. Billups is so delighted at Hal & Abbotts [Abbott's] prospects now she dresses more than you ever saw her & seems quite young

again -- Batavia [added text: Thomas] is to marry soon I hear a N. [New] Yorker -- She had that enlargement on her throat taken out in Philadelphia & looks badly from the effects of it. Laura Rutherford looks better than you ever saw her dresses well -- & seems so cheerful [unclear text: Mattie] is in an interesting condition again -- Habersham [unclear text: Adams's] wife is very much like her sister Mary Wilkinson do you remember her? rather pert & not very genteel -- Mary Willis Jackson has a son which weighed eleven of a pound!! I must give myself room to thank you for Callie for the nuts & letter. You dont [don't] know how they gratified her Indeed many have enjoyed the nuts & they have helped out Christmas wonderfully -- She & the other children send many messages to you uncle Porter & Joe" but I will combine all in a heap of love to all joined by Your Fond sister --

Callie says I must tell you "little [unclear text: Merick] " is all but dead to marry & she reckons he will All are well at Joes [Joe's] & Wills [Will's] & Muggie is much pleased with her finery from Miss Bailey -- I've not seen it yet but Ma says her dress is something like yours. Her bonnet a pink velvet -- collars shoes & hair braid gloves stockings cloak &c [et cetera] &c [et cetera] Is not this letter a real salmagundi -- 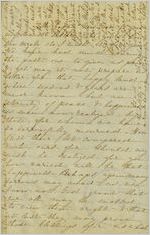