My dearest Sister
It has been a dark dreary day both within & without -- to me -- & I dont [don't] believe I would write were I not afraid your truly interesting letter might remain too long unanswered. I so often think of writing & something happens to prevent it I like now to write whenever I can even at the risk of being uninteresting. We have had such a rain for two days everything is inundated. Mr. Cobb had to leave in the midst of it today to be absent two weeks to attend Upson Court. This weather too I must think affects Pa very much. For one or two day [days] before it began he was comparatively easy

today he is not so well. Indeed Callie without wishing to alarm you (for I see as yet no cause for it) this rheumatism is affecting Pa very much. He is always up & dressed & does not even look badly -- but his spirits are almost constantly depressed -- he eats nothing & at times suffers very much. To-day [Today] the sain [pain] is confined principally to one foot & his arm & he has but little use of himself. Reading has amused him but his eyes are becoming inflamed & this I think adds to his depression I had hoped we might have settled weather but the prospect is again gloomy -- & these sudden changes of course prolong his attack We do not apprena [apprehend] danger -- but we hate to see him such a constant sufferer -- but should his disease ever alarm us you shall know it.

I have written this much to you to prove the truth of my promise On Saturday he has to leave for Milledgeville if he is able to do so He will not see Dr. [Doctor] Moore & we hope he can go as Dr. [Doctor] White is a favorite with him & we trust he might relieve him. I am urging Ma to accompany him & she will do so if he likes the idea Pa has lead [led] so active a life it is a great trial to him & this I know adds to his dejection. But he is remarkably patient & I know you will be glad to learn dear Callie that he bears this stroke like a child of God. We often speak of the change in his temperament & perhaps even this disease may be a source of much mercy to him. Ma keeps well altho [although] she is thinner. Muggie

is better but looks so badly -- She escaped the hemorrhage & we hope she may now do well in all respects. Lid is well & has just had quite a fright with [unclear text: Edwin] who had the croup quite severely Mr. Gerdine has returned & his family are remarkably well -- He seems to come back better pleased with Athens than ever & I think feels more settled. The extravagance of Columbus appears to have alarmed him & he speaks with great disgust of the aristocracy of wealth there -- Did you hear of the death of Anna Youngs [Young's] unfortunate child & of the birth of Sue Youngs [Young's] daughter? -- She is at her fathers [father's]& Johnston is still sinking with consumption. [unclear text: Valley] Young weighs over two hundred -- & leads the life of a real hunter devoting himself to nothing else --

not be guilty of the same offence [offense] again -- Kiss him for all & make him familiar as you can with us -- All send love to Mr. King also & to yourself -- Do excuse this scratch and believe me I only send it because I love to have you feel I think of you & love to give you pleasure Write whatever you can & ask me all you want to know you see I write you everything candidly

even at the expense of making you sad --

Dont [Don't] be alarmed about Pa -- I've written you the whole truth. 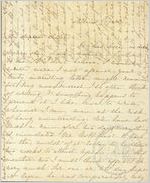