My dearest Callie -
I have almost dreaded to answer your last kind letter to tell you we were not coming. But upon second thought hearing of so much sickness in the country of various kinds and my own children not very well we rather feared to take the trip just now but you need not despair for at some future day you will see us - even if you do not expect it. Callie without being really sick is very delicate and looks badly. Sally too has been quite unwell. We have concluded just to take a cabin at the springs for a week or two and see if it will not benefit them. We expect to leave in a week

if we can manage to get away -- Their school is now closed and much to our sorrow Miss Olcott leaves tomorrow. I have just come down from Muggie's who has been very sick all of the morning with colic. She had become somewhat relieved and I hope may suffer no bad effects from it. Poor thing she has not been well since John's death - it was so sudden - and under the existing state of things on the lot we could all but feel badly - We cannot suspect it was anything wrong and yet to say the least of it - unpleasant feelings are connected with it. The Drs [Doctors] all think it was either some disease of the heart or brain but as no examination was made it is difficult to know - Muggie was opposed to its being done and I dont [don't] know that it

would have caused any relief - Her children are sick with dysentery too and Annie looks quite badly - Ma is rather threatened with it and I am just recovering from an attack. Pa writes that in Macon many are dying and he has had it. He seems to be almost relieved of rheumatism and thinks the cure was affected by the springs. Jimmie has not written but we heard from Marion Wilson who saw him that he was much admired & admiring himself a very nice young lady a Miss Thompson at Holly Springs much to our gratification as she is from all accounts everything to be desired. Our town affords no news. Last night [unclear text: Mr Kemerer] the teacher of singing whom you will remember gave a concert to his scholars. I wish you could have heard and seen them. The house was

crowded and they astonished all. Tonight by request he gives another. Even Ma went and I dont [don't] know when I've seen her as much pleased. Our gardens are burnt up almost and the cold weather also blasts them. We will have I fear a sorry table at Commencement and a big crowd as strangers are already coming in. My passage is finished & looks very prettily and new. I am busy today putting up lace curtains & shades in the parlor and shades upstairs. My dining room is now being papered and I eat in the back porch. I tell you all of these home matters to keep you acquainted with every change & if you cannot see them at least to know them -- We heard from Lid in Augusta. She stood the trip very well and went immediately on. Mrs Baxter & Sal have gone to the Indian Springs. I expect from what I hear Miriam Lumpkin

is going to marry a Mr Nichols who was a member of the legislature from [unclear text: Clinch] & about such a man as she is a woman. I fear they are coming up to commencement [unclear text: to] spend the honeymoon what will I do!! I found the apron pattern I spoke off [of] and send it to you - as you may use it someday - Kiss little Joe for all & give love to Mr King Pa took the likeness with him & thinks it so much like Annie - I was glad I kept it - it did him so much good. [unclear text: Phebe] is very sick with fever, another bad prospect for commencement I've just heard Muggie is better &

sleeping. As usual excuse this scrawl from 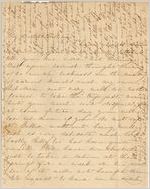