My dearest Callie -
Yes I am almost ashamed to write to you after waiting so long a time - but I know you will forgive me when I assure you that anything but neglect has caused my silence. At Milledgeville in company " I could not write & from there we were summoned home to attend the dying moments of old Col. [Colonel] Cobb which kept me for sometime from home & my mind in such a confused state I could do nothing with proper care. Little Lizzy too has required our constant attentions & my own children have been

very unwell with colds for a week or two. Lucy is now just recovering from one of her attacks a more prolonged one than usual. Added to this we are just finishing "hog killing" & you will believe me even 'tho [though] I have made a long apology when I tell you I have been much engaged. Callie never believe I forget you. You never will know how much I love you & how often I long to be with you. I sometimes think my attachment for you - a younger sister is a most peculiar one considering how much we have been separated. My husband and children have this same feeling for you & oh how much I wish our lots could have

been cast together in life! God knows however what is best & of one thing we can feel assured. If we diligently seek that home above 'ere [before] long we shall spend I trust an eternity together - which will know no change but a constant growth in love & happiness. When poor old Col. [Colonel] Cobb died - I almost felt it would be sweet even when but half my race was run to go to my little ones & I could envy him wicked as it was the joy of meeting them. It was a singular fact my first boy's corpse was the first he ever witnessed & just before he died when calling mine & Mr Cobb's name in connection I almost imagined he then beheld

his blest [blessed] spirit a ministering angel to convey [added text: him] home. Do you wonder that I envied him. But dear Callie I did not intend to write you such a letter. It is pleasant however thus to commune with you & I feel that you will appreciate it. Mr Cobb has felt his fathers [father's] death a great deal more than you would have imagined under the circumstances & [added text: it] [deleted text: his] [added text: has ] [deleted text: death] has seemed to ripen him more & more in his christian faith. The old lady went home with Mary a day or two since to be gone sometime. Mary has fattened very much but looks well. She talked a great deal about you. She has a fine boy just two months old. Mattie will probably

live here or at West Point hereafter & not return to Florida. The town is quite devoid of news just now. Indeed Pa writes so often I am always afraid of repeating something. Miss [unclear text: B] ingham's wedding next week the various items from the legislature especially with regard to the [unclear text: new] county & the college & the sales of hogs & cotton are the all engrossing themes. Our front street very often reminds you of the jam of omnibuses &c [et cetera] on Broadway. One day this week we could not drive through. Joe has been to Lexington trying to buy negroes but they sold very high - as they are doing all around here. He - Will & Mr Gerdine have had

much sport around here at the various sales of property & Will has made several good bargains. He bought out with [unclear text: Dr [Doctor] Long] a drove of hogs today at 7 & is selling them now at [unclear text: 8] - [unclear text: But] dont [don't] write about it as he may not wish it known. Mrs Baxter went to Sparta a few weeks [added text: ago] to see little Sallie Bird who was very ill with bilious fever. She has not yet returned & I fear the child is no better. Miss Lewis told me in Milledgeville Sal "took Mrs Birds [Bird's] death very hard" & she thought she would miss her very much for a long time. Addie Jackson was quite gay in Milledgeville dressing splendidly. You know she has not been

able to for several years & she now enjoys it very much. Kitty White is another who seems quite fond of gaiety this winter. I think Henrietta Kenan was the finest looking girl we saw but the state of the family prevents her attracting much notice - from clever sources. You would not know Mrs Orme she has become so fat & jolly & poor old [unclear text: Orme] looks more awkward & silly than ever - but you can't imagine what deference she pays him. It is really strange. We saw Mrs Stephens (Mrs. Bell) in [unclear text: M [Milledgeville] ] _ & she is one of the most lovely women I think I ever saw. All there asked much about you. Did you hear that Tom [unclear text: Camaks] [Camak's] wife had a

miscarriage & also hemorrhage of the lungs. Did Pa write you of Toby Coxes marriage to a very nice girl at Holly Springs & how awfully he was treating her. It is a report here that Tom Golding & Rosa Crawford are to marry. Lizzie Craig is going this week to Milledgeville as she told me to try & "help the college & herself" - next time I write which I declare shall be soon I will try & find out what Pa has not written you - as with these little on-dits I might fill sheets but I am afraid they are stale to you. Pa & Ma are neither well. He has rheumatism & she is suffering again from her stomach. She has had her teeth all pulled & I hope when she gets a new set she will be able to eat more. All the rest well but Muggie who has a slight cold & otherwise [unclear text: grunting]. Lizzy Gerdine still [illegible text] . Do excuse this awful letter which I am afraid you wont [added text: won't ] think it much to receive. And now with love to Mr King what shall I say to the boy. The children send more messages than I can write

How I wish we could see him & kiss his dear little face. I sometimes want to see him so much the thought of will make the tears run down my face before I am aware of it. Dont [Don't] treat me as I have you. You don't know what a true source of pleasure your letters are to sister 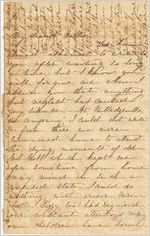