My dearest Callie -
It is a dark dreary morn and what renders it still more mournful to me Mr Cobb left me this day to be absent for sometime to come. Pa also went with [added text: him] to attend Columbus court which will last about two weeks. Mr Cobb has business in Macon and Milledgeville which will detain him longer. You would suppose Callie that by this time I had become reconciled [deleted text: a] to these repeated separations but it is not so. Lid said to me yesterday "I feel Wills absence so much when he is away, but I suppose you are used to brother Toms leaving, you and dont [don't] mind it." I said but little - yet few know Callie how much I do miss him when away. I think the concealment of my feelings is a great fault with me and it subjects me often to the appearance of coldness and ingratitude but God knows how deeply I do feel. As to Mr Cobb you know what he is to me & mine and you know how sincere I am when I say his absence leaves me often more despondent than is right and I am also beginning to feel unhappy at

at his overtasked powers to support his family. He does not look well & has not been for sometime perfectly well. This was one cause of my visit to Savannah. Another reason was on Ma's account to whom I thought the trip would be really beneficial. The truth is Callie she & Pa have failed much during the last year not so much in appearance as in bodily strength, & much more so in their want of interest of life - & the energy & pleasure which life [deleted text: you] used to find in them. It is becoming apparent to many & it is a source of true sorrow to me. The causes I do not pretend to unravel but I would that the consequences could be removed. In the midst of my own troubles I try not to lose sight of this melancholy of our parents and I hope to do all that I can to cheer their latter days. Our trip to Savannah was a very pleasant one the miserable weather we had being the greatest drawback we had to encounter. All treated us with great attention and had we remained our invitations were too numerous to accept. Even the Misses Bowen invited us to dine with them & seemed pleased to be our friends. We had met Mrs Le Conte at the Pulaski on her return from the North

& found her a most agreeable companion. She was much sought after at the North this winter & "Johnny" has had so many tempting offers made him we much fear we shall lose him also. I saw nothing new at the entertainments in Savannah except before supper was announced hot fruit cake & tea were handed around. Mary Willis gave us a splendid supper and seems as happy as she "well can be." The old Col. [Colonel] is quite as delighted as Bullock about the "future prospects" and makes himself the subject of laughter by his attentions to Mary as well as the envy of all the ladies by his kindness to her. As to fashions I saw nothing new. Sacks like ours made of black silk & trimmed with velvet points left open in the bosom are all the rage made shorter than ours. Large round black velvet capes with just a cord of black silk around them are mostly worn in the street. We found nothing new on our return home. John and Mary [unclear text: Athena] were there the happiest couple you ever saw Mary says "John is such a jewel of a man she wonders she did without him so long. Lucy is fattening very fast since she came and looks very well. She is very happy fixing at her new home and

is making everything very comfortable. William leaves in a few days for Mississippi & Texas & Willy is going with him. We are very much interested just now in opening our little school. Mr Cobb has procured a fine teacher from the North who is to arrive today. We have promised [added text: her] $500 independent of the town. John & several others have joined us & I hope we may succeed. Lucy has sent all of hers to Mrs Andrews. We have also got a fine french and music teacher. I am trying to get nice scholars and have taken a great deal of pains to arrange our school room. I wish you did live near us dear Callie. Our tastes I often think are much alike and I am sure we should be of mutual assistance to each other. But God directs all of our movements and the great lesson I am now trying to learn is always to be content & thankful for the blessings I have & to hear the chastisements as only a needful preparation for that blest [blessed] [unclear text: abode] where we shall rest from all our labors & sorrows forever. As to dear Jimmie I miss him so much. Callie I do not wonder at your pride in him. He is a noble spirit & I often breathe for him the prayer that he may possess the "one thing" which is alone needful to perfect him & which I think would indeed be so precious to him. Dr White is so fine a physician were it not for taking him from you I should think he might learn more with [unclear text: him] then any one else. He is such a favorite in Milledgeville I think he could spend his time pleasantly there. The children are very well and often speak of you & Uncle Porter. They say they never will be satisfied until they go to Alabama. All unite with me in much love to Brother Porter Jimmie & yourself.
Your fondly attached sister
[Signed] M [Marion] 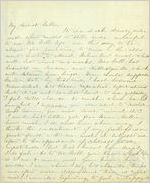