I cannot tell you my dearest Callie how many times I have thought of and attempted to write you of late and still have failed to do so. It seems to me my time has never been so constantly & laboriously occupied as it has been for the past three weeks. John and his wife - Col [Colonel] & Mrs Grant & various members of the family have been a great deal with me - my servants have had more sickness amongst them than I have ever known them to complain of & my own health whether affected by these difficulties or other causes is again far from being good. I have in duty to others & [unclear text] juctice [justice] to Mr Cobb and myself [added text: to] make a great many visits which you know is no light task for me to perform & Callie I sometimes feel as if I should shrink from such things and be perfectly retired from the world. But my children are growing rapidly - and being daughters I feel for their sakes if for no other reason I wish to make myself beloved by those amongst whom my lot is cast. They are kind to me & I feel that I am to blame if my children do not hereafter enjoy their hospitality. I also believe it to be a duty to contribute as much

as we can to the welfare and happiness of those around [illegible text] [deleted text: me] [added text: us ] & consequently as God has blessed me I fear a curse if I do not in a laudable manner contribute my mite to render my neighbors cheerful & social. A little pride too Callie has a great deal to do in tempting me [added text: out] as I can never bear to be under an obligation to anyone & consequently I would rather keep them in my debt than me in theirs - even in bestowing favors of hospitality. Excuse this long "tirade" Callie I am going to write you a real "[unclear text: home] " letter & consequently I wish you to understand the feelings which at this very time have rather prevented me from writing to you. The 22nd you know was my birthday. I have long been wishing to entertain a few friends who have been kind to me and as my good husband had sent me a most beautiful birthday cake from Macon I thought it would be a good time to carry out my intentions. As Mr Cobb had to attend Walton court and the 22nd came on Wednesday we selected friday for the entertainment when he was to reach home. I ordered fruit & ice from Augusta oysters from Macon & baked myself some

as nice cake as you ever saw. Ma helped me make jelly and she & Lucy furnished me with a nice supply of cream. On Monday the chapter of accidents commenced. Ma was cutting her finger nail with a sharp penknife & went to stoop over and push the fire when she ran the knife into her breast & made it bleed profusely. Whether from this or a cold she has been quite unwell until yesterday but is now relieved. [unclear text: Phebes] youngest child the next day had spasms & she herself was sick. On Wednesday Bob Smith came to see me & told me he had a letter from Mr Cobb for me & had lost it & he thought it was to tell me Mr C- [Mr.Cobb] would not be at home until Saturday. On Thursday my ice all came & on friday no fruit or oysters but Mr Cobb with Hope Hull to attend the party. My salad was made turkey killed & all but I have postponed it until next week. No grand affair but I wish dear Callie you were - just for me to share the "goodies" with you. Ma & Lucy have laughed at me a great deal especially as during the confusion of the week I omitted to mention the change to [unclear text: two] young gentleman [gentlemen] who on friday [Friday] night came "ready armed & equipped" for the show. But how I am dwelling upon home matters - let me try to be less egotistical. There is really no news here. Mrs Billups is in a decided consumption I think - but notwithstanding this & poor [unclear text: Janes] departure she is bringing [unclear text: Goosey] out & entertaining a great deal. The Thomases are very [unclear text: courting] to me & make many kind inquiries about you. John's wife I

am very much pleased with & think her so pretty. Lizzy Craig is quite gay & is [unclear text: wearing] a great deal of white. Mrs Hitchcock is with Sally Hunter & going to Baltimore to educate her daughter. [unclear text: Dr H] has made 450.000 [added text: $450,000] in California by his practice and merchantdize [merchandise] in three years. She is wearing and brought Sally some elegant thread cambric chemises. Lucy does not go about much but seems depressed I think owing to Williams absence. He has not written her a line. She seems to think you ought to write to her. Ma seems quite lonely so many [unclear text: away] from her. She has suffered a good deal the past week from cholic [colic] again. I wish I could see you dear Callie to talk to you about many things. Writing is to me so very unsatisfactory. I scarcely know what to say to you about your determination to remain in Ala. [Alabama] It seems to me after your last trial which was tedious 'tho [although] not dangerous it would be better for you to be with Dr [Doctor] Moore & Mrs Manly who know just what your difficulties were. Ma seemed to feel badly about but if you don't come will go to you. I do think if you could come & stay with me [unclear text: and] all feel that it was right it would be the very thing. We cant [can't] both leave Lucy you know. I thought I would tell you my ideas Callie - you know the motives which prompt them. Dont [Don't] think of trouble in the matter but your own comfort & safety & we shall think it best. If I could I should delight to be with you and it is the sincere desire of my heart to do so. I have never talked with Ma about going as she spoke so positively of it I thought she would prefer my staying. I still think it would be best for you to come in & spend the summer & have your health re established

I am sorry Muggies health is so bad. I feel truly sorry for her Tell Joe I intend answering his letter soon I have written to no one lately Give my best love to Mr King Miller Will & Lid if with you. We think it strange they have never written God bless you dear Callie no "dont [don't] cry" - "all is well that ends well" & all works for good to those who love God. How [unclear text: sweet] the assurance 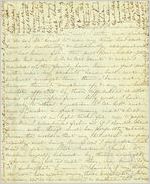