Athens April 16th
1852
Well my dearest sister as I wrote Willie a few days since I intended paying a flying visit to Charleston to buy our furniture, and upon my return would write to you. I [unclear text: now] hasten to keep my promise for fear I shall delay too long when the cares of housekeeping, &c [et cetera] , again press upon me. I only reached home yesterday and still feel quite unsettled and disinclined to renew the numerous duties which now press rather heavily upon me - making up the childrens summer clothing - arranging the house & various other matters too numerous to mention. I only spent two days in Charleston - and as Pa accompanied us - with my own rushing temperament you will not wonder when I tell you we quite exhausted ourselves whilst there, shopping, sight seeing &c [et cetera] . I know you will not consider it a love of display in me but will be interested to hear of my various purchases especially for the house. In

the first place then I bought all of our furniture and was more than satisfied with it. For the parlor we selected a set of chairs taborets or ottomans - two settees & two small rocking chairs - of a material similar to sister Mary Anns only ours is crimson & green with window curtains to correspond. A handsome carpet which took the prize for its pattern at the worlds fair, - tables &c [et cetera] to fill up. For the library - a set of chairs - an oil cloth table & lounge. A handsome hat rack of bronze & two grates like those you saw in Columbus. For my bedrooms - carpet & matting - two handsome bedsteads a cottage couch - washstands & crockery - a wardrobe & bureau - towel racks &c [et cetera] . I tell you these as I think you would like to hear & I hope this summer you will see for yourself how nicely I will be fixed. Yes Callie I have many blessings. [unclear text: yea] comforts more than I deserve & I hope instead of vanity I feel humbled to think of my ingratitude for all the mercies so lavishly bestowed upon me. In the way of finery in the dress hue I bought but little as in addition to not needing

it this summer - I felt it would be unwise at this time to be extravagant. For your sake I somewhat examined the fashions & saw but little change in them - light silks - tissues - & barges being principally worn & no material difference in the style of making. Marion Pickens & one or two ladies wore the vests which I have heard you speak of made in the front of their dresses some colored & some white. Large collars are again in vogue & the old shapes are coming back that is square & round. By the way, I met with a lady at the Charleston Hotel who took a great fancy to Sally & consequently won my heart. The night before I left she slipped an elegant turquoise ring upon Sallys finger & said she had discovered I was the sister of her old schoolmate Callie L. [Lumpkin] to whom she was much attached. Her name was Mrs Hale - formerly Louisa McCoo or some such name from [unclear text: Camden]. Do you remember her? Mrs Thomas & [unclear text: Eliza Dent] were also in Charleston. Mrs [unclear text: T. [Thomas] ] having a new set of teeth put in & shopping to me in a very amusing manner which you know too well for me to describe. Mrs Adam Alexander was also at the Charleston Hotel with Mr Gilmer so

you see I had acquaintances in abundance. She looks wretchedly & her health is much worse. Clifford is to be married to [unclear text: Alfred] Poullaine soon much to the astonishment of her friends. Sarah McHenry, her mother & poor little Noel went North last week but I fear for no purpose. Serious apprehensions are felt by Sarah's friends about her mind she seems to feel this blow so much. Carry came to see me in Augusta & seems quite carried away by balls, parties, dress, &c [et cetera] . We found all quite well upon our arrival at home & little Callie whom I left the happiest & most excited to meet me you ever saw. Her first remark was - "well Ma, [unclear text: Sallie], & [unclear text: Lucy] went to Charleston - now let me go to Alabama." This seems to be the height of her aspirations. She went to hear the Campbell minstrels the other night & amused everybody by her wakefulness & loud remarks - about the music which all heard. You dont [don't] know how well she sings - & thinking the Campbells were aiming to outsing her - she kept calling for songs which she said she knew they did not know. Everybody pets & loves her so much & she is so smart. I sometimes fear another idol will be torn from me to make me remember Him who alone can never die. Poor old Mr Hancock was buried last Sunday & Mrs John [unclear text: Crawford] will probably not survive many days. We are all quite depressed just now & as you may hear it exaggerated I think it best to tell you. Lizzie Towns has the small pox caught from her Uncle Sparks Hunter who died in [unclear text: Green] & with whom she had been staying. She had been home 21 days & today Dr [Doctor] Moore had the town council called [unclear text: &] reported the case

There is a great panic in the town & country & the schools all closed today. The students speak of leaving. Our street & the street running down to Blanton Hills & up to old Mr Carltons is barricaded & guarded & today has seemed like Sunday [unclear text: Fred] [unclear text: will] suffer to say the least of it & I think she did very wrong to come home. We will run no risks - but will leave if it becomes necessary & will keep you advised of its progress. I have written the whole truth that you may give yourself no uneasiness we are in the hands of a good god who will order all things right & best
[unclear text: So] dont [don't] [unclear text: show] this hurried scrawl & give love to all & I will write you soon

I must tell you Mary comes in to be confined in August & Tallula Taylor will be sooner.

All send much love & many kisses to Aunty. Remember me most affectionately to brother Porter. I think it would make you quite vain to repeat to you the many praises I have

heard of him since I wrote you from Mrs Sam Harris & others but I must stop. Sue Wiley has gone North with her father. Write soon & often. I wish I had taken a larger sheet of paper but this is large enough to sign myself as [unclear text: ever] your fond sister M [Marion]

The Pringles have quit Dr [Doctor] Reese's & gone to Oxford to live with [unclear text: Ned]. The Dr [Doctor] could not stand the baby. 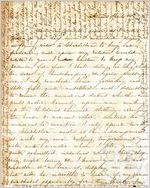