July 1852
My dearest Callie -
I have intended writing you for several days past, but have been prevented by indisposition from doing so. I am not well today - but fearing time [unclear, deleted text: will] will not improve me, I have determined to devote a few minutes to you this morning if it be only to assure you how much I love and think of you. [unclear text: Jimmie] who wrote you a few days [added text: since] has I doubt not communicated all of the news. In addition to my other sources of discomfort this week Pa & Mr. Cobb have been absent at Americus & their letters yesterday lead us to fear they may be absent a week or two longer owing to the lengthy speeches of some of their legal brethren. Of course annoyed also by the excessive heat & the musquitoes [mosquitoes] their patience is severely taxed & they complain most bitterly. Commencement is only a fortnight hence and I poor I feel as if my cup of misfortunes just now was well

nigh full. It is the first time Mr C- [Cobb] has been able to be here in six years & being so far as my household arrangements are concerned better "fixed up" than we ever were [unclear text: I am] so sorry we cannot entertain as usual at this approaching festival. But all is for the best I doubt not & He who orders all things - will of course do all things well. A general gloom will be cast upon the exercises I fear - owing to the melancholy murder of Col. [Colonel] Craig - who [unclear text: you] have seen I suppose was shot by two of his own men deserters. Lizzy is greatly distressed I hear & Dr [Doctor] Church himself seems greatly cast down. He now has to support two widowed daughters & I expect feels almost [unclear text: inadequate] to do so. May he who tempers the wind to the shorn lamb gently lead them & those we love - who are suffering now so much in a path they know not & pour the oil of consolation into their wounded hearts. Lizzy has been remarkably gay since her return from Florida & I think will be severely afflicted [deleted text: I expect]

The town is just beginning to fill up with strangers - altho [although] I know but few as yet. Mary Cobb is expected next week - but I suppose will not be a belle at Commencement. Sal. Jackson seems so perfectly happy & contented at home she will not be here until September. Brother [unclear text: Howell] & his family are here & expect a great deal of company. Old Col [Colonel] Cobbs health continues to fail him very fast & I doubt whether his sojourn here will be much longer. Mrs [unclear text: Clower] lost her little girl named Marion last week, & Mrs J.H. Phinizy is expected to to [to] die in a short time with the same disease which killed this child & poor Mrs Young - erysipelas. Mary Jones is still confined to her bed but her babe is much better. None of the Baxters have come yet but are constantly looked for. Mary's youngest child I heard was very ill - & her own health is wretched. I had a letter from Mr Cobb yesterday in which he writes me he thinks Mr Nightingale will probably purchas [purchase] Col [Colonel] [unclear text: Lamars] house here as a summer residence.

Athens continues to improve & there is quite a spirit of [unclear text: persisting] & building going on. Pa's house really looks beautifully - & is more admired than when new. Do you remember Miss Sarah Lamar who married Dr [Doctor] Reese. She has been quite deranged for sometime but is now better caused by neuralgia of her head. How prevalent this is now becoming. I sometimes think it is owing to the great degree of excitement and haste which now seems to characterize the age. Well dear Callie I believe I have retailed all of the "on dits" afloat & I will conclude with a little bulletin of family news - that is - home matters. All are well at Ma's & Mr. C. [Cobb] writes me the [unclear text: brimstone] water seems to have benefitted Pa. His [unclear text: health] however is not what it was when you saw him & I do hope he may be able to [unclear text: take] a [unclear text: jaunt] somewhere this summer as I know it would be of service to him. Jimmie is thin but well. He stays mostly with me & is very kind to me during Mr Cobbs absence - & has endeared himself very much to me. He & Eddy are noble boys & I should dislike very much to see either of them leave us. Eddy & Dick Taylor are reading law in the office & Pa has the prospect of quite a large class. As to my own little brood they are not well & still not sick. Sally & Callie are quite thin. Callie never sees the omnibus but she wishes to know "why dont Aunty come" & seems to desire it more than ever. She has become a [unclear text: universal pet]

but still insists upon it she is "Auntys." Her devotion is the strongest I ever witnessed in a child Well Callie I know not when I shall write again I hope I may soon see you & brother Porter - we all desire it so much. I sometimes think in looking at the future where "passing away" is stamped upon every thing I may never tell you again how dear you are

assurance from your fond & devoted sister 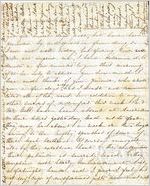