Sparta, Feb [February] 7th/53 [1853]
I have just read a letter from Mother, my dearest Cal, telling me of your safe, & unexpected arrival in Athens. I am delighted to hear it, for I hope to go up myself, either this month or next, & I feel that it would add very greatly to my happiness to see you. I made a visit of one week only to my Mother last year, & I cannot wait until summer, see her, I must. I would go right away, but my garden (first year you know Cal) will require my supervision, though I cannot get into our house [unclear text: until] June or July. But I am at the plantation a great deal, & live now in a regular log cabin, yet I have been happier there, than I've ever been before - so many things to occupy & interest me & I have almost killed myself sewing in Sparta, having nothing else to do. But butter & milk, chickens & turkeys, putting up pork &c. [et cetera] ! Ah, that is the thing that entertains me now. I was very glad indeed to hear from you, after so long a silence, & wondered why I had not had a letter earlier. But I heard by way of Athens, of your

Mother in law's illness, & concluded that, that might be the cause. I hope darling friend, to see you soon. If I do not, you must come & see me, "that's poz" [positive]. You have heard probably of the death of our estimable friend Judge Sayre. It is one of the saddest events, that has taken place in Sparta. He was so much beloved, as well as highly esteemed. His funeral was very largely attended, & Mr. Beman preached an excellent sermon. His death was very sudden, & totally unexpected. He was one of your staunch admirers & for the last two years, has been such a friend of mine, that I mourn his death most sincerely. Mother writes me of delightful prayer meetings now held in Athens. I wish I could get to some. We have a dearth of Presbyterian privileges here, though quite a number of Methodist & Baptist meetings. Dr [Doctor] George Pierce, has moved his family here, & will come himself in July, when he resigns his place as President of Oxford College. Tom Pierce, who married the great belle, Ann Dickey Malone, is also living near Sparta, but she is very much dissatisfied I hear. As yet I've not seen her. Mr Bird tells me she is very much faded. I hear quite often from Lucie and Mrs Terrell. I think they will be at home by June, judging from her last letter.

[unclear text: Em [Emmeline] ] Stephens has a daughter two months old; & she has suffered martyrdom with her breast. It has risen four times. She is at length relieved. Linton Stephens, is Linton Stephens still - notwithstanding he bought an additional plantation & 70 negroes recently. He talks largely of his "force!" Ada Seymour & I went up to see Em, and Stephens entered so minutely into her troubles, & explained the technicalities of breast lancing &c. [et cetera] so freely, that Ada's fresh cheek, looked like a ripe June apple. When we came out, Ada said "Well, for Mrs Stephens' sake, I've tried to like that man, but he is unbearably coarse." And truth to tell he is, as you know quite as well as I do, and as you said when she married him. But I thought she would refine him, she is so gentle & ladylike herself. Oscar Dawson says he sat before the Hotel in Washington last summer, in dressing gown & slippers & handed Mrs S. [Stephens] some water in a little pitcher, over the heads of a whole box of elegant people at the Opera House! Camp meeting style. Fanny Johnston sends you much love & says she hopes you'll visit Sparta soon. So likewise does Mr Lewis, who often says "Sit down Miss Sallie, I want to talk about Miss Callie." He now boards at the 'Edwards House' our new Hotel, with his family.
Bruce [unclear text: Wynn] sent on Susie's daguerrotype to me, while I was in

New York, to have her portrait painted from & I succeeded marvellously, or rather the artist did. It is an exquisitely beautiful painting & an admirable likeness. Bruce is delighted with it. I am so sorry for poor little old Bob Sayre. That great house & no one in it, but himself. It looks deserted & strange [unclear text: already]. Will you stay all the summer in Athens? Or do you know yet? Do write me of your intentions &c. [et cetera] I do hope to talk with you once again dearest Cal 'ere [before] long - 'till then, you must let me hear from you. Give my love to your Mother & Marion. I am glad to hear that Marion's health is improved by her visit North, I did not even know she had gone until you wrote - & Mother mentioned that she was improved by her trip. I had letters from Sallie Elmore & Lizzie Dickson yesterday. You & they are my only correspondents, except my own family & I look for the letters very eagerly. Is Mr King with you; my unknown cousin? And how long does he stay? Do write soon Cal - & with a budget of love - believe me -
very sincerely your friend,
[Signed] Sal 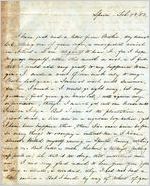