Sparta May 11th 1852
Your first letter, after marriage, dearest was like all its predecessors, charming & very entertaining; a thought nearer & dearer perhaps, that I felt the new cord which binds our friendship, so strongly & so pleasantly. I rejoice over your contented happiness as a wife deary -- & yet, who ever married a Porter, or an Edgworth, that was not happy? The names have been familiar to me for many years, as those of celebrated authoresses. How much more familiar now - as my own Edge - & my cousin Porter?

Your letter was so affectionate, so endearing - it told me so much & in such a pleasant way, that an impulse I could scarcely resist, prompted me to answer [unclear text: instantly.] Since then, I have been almost entirely at Granite Farm (our plantation) and as yet we are so poorly fixed that I had neither pen nor paper at my command. I have only been in town two or three days, & I write you at as early a date, as possible.

We shall be very differently situated on our place, from what I imagine you will be. For at least a year, we are to put up with a shabby house - pine tables & split bottom chairs. Yet after awhile Mr. Bird hints strongly of fountains & an occasional piece of statuary. For this I must e'er [ever] "bide my my time." To all plans we may make for the country, there arises in my mind, one drawback. That is the education of my little ones. The thought of sending them from under my own eye, no matter tho' [though] it be only four miles, is intolerable. "Yet sufficient unto the day is the evil thereof." Perhaps by the time they will need schooling, [deleted text: I] [added text: we] shall think things sufficiently "en traine" in the country, to move back to town. So Cal - write me minutely, every thing relating to yourself, or your new home. What shape is the house - & what kind of furniture? Every item, no matter how small, is valuable to me, concerning you & yours.
Some of the young ladies here, [deleted text: who] have just been to Oxford on a visit - & they tell me

that Rosa Pringle, who with Lou, is living with her brother in Covington, is wearing herself out, in devotion to poor Sarah's child. About two weeks ago, she had a hemorrhage of the lungs. Her health is very frail. Now, for once, how provoking that you are married! I would like to tell you a wee bit of news, concerning an acquaintance of yours here. Mrs. Stephens I mean. But I must leave you to imagine it. [unclear text: Dr. [Doctor] ] & Mrs. [unclear text: Terrell] & Lucy, will sail tomorrow, from New York, for Europe- if nothing has occurred to prevent. Lucy gave me an elegant riding hat, & my children a handsome dress apiece. I believe you have heard of my treasure, my superb riding horse, "Starlight." Such rides as I take! and so doubly enjoyed because of my fearlessness - & really good riding. Edge has been so anxious to cure me of all nervousness while on horseback, & I have been so anxious to be cured, that I feel secure now. No marriages here, since Mrs. Bell's - but our village has been draped in black. [unclear text: Fanny Johnstone] has lost her Mother, Mrs. Mansfield.

[unclear text: Dick Carew], the lame man you remember who lived across the street, was shot dead, not fifty yards from our house. Though he was a reckless creature & a nuisance to every one, yet it was shocking, to take place so near. There have been several deaths this last month, of heads of families in Sparta. I do not think however you would know any of the others. Aunt Julia, Fanny & Mrs. Connell, have all gone to visit [unclear text: Blandy], who I hear is living in charming style in York District So. Ca. [South Carolina]. Aunt J. sent much love to you - & says she is more anxious to see you than ever, for she wants to see the gentleman, who could win the long sought Miss Callie Lumpkin. Ada Seymour & Fanny Johnstone both send affectionate remembrances. Billy [illegible text] is at Tampa Bay, in feeble health. Sue Wiley is spending two or three months in New York. You should have seen with what interest, Edge heard your letter read! He declares it is a treat, & while, feet on [deleted text: the] [added text: a ] chair, he puffs his cigar, he wonders "how long it will be before Cousin Callie will write again." So it is but fair, that Cousin Porter should like a little to listen to my poor epistle when my gudeman is so fond of hearing yours. My cordial regards to all the "nouveaux maris" [young marrieds] as also to your "better & worser."

I have spun out an unreasonably long letter, considering it is so devoid of interest - but I consoled myself with the thought that my bonne Callie will answer it. To that answer I always look forward eagerly. My roses have had a glorious spring blooming & look [unclear text: prettily] now. Who will look after your green house? & who take care of your flowers. Alas! But they have had their day.

Mrs. Hunt often asks after you. So do many others here.

My little ones are charming as usual & look sweeter & better, than I ever saw them. Write often darling - remember no friend loves you half so well as your own Sallie

I hope we shall certainly meet at home. When do you go? What time in August? 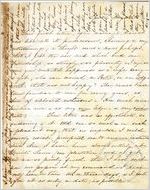