The collection consists of newsfilm clips from WRDW-TV in Augusta, Georgia. The clips date from 1961-1968, with additional footage from 1974 and 1976. Included is footage of Fort Gordon, Carl Sanders, Lyndon B. Johnson, Herman Talmadge, and several beauty pageants (including Miss America) and contestants.

Description
The collection consists of newsfilm clips from WRDW-TV in Augusta, Georgia. The clips date from 1961-1968, with additional footage from 1974 and 1976. Included is footage of Fort Gordon, Carl Sanders, Lyndon B. Johnson, Herman Talmadge, and several beauty pageants (including Miss America) and contestants.
Founded in 1954, WRDW is a CBS-affiliate television station in Augusta, Georgia.
"Carl Sanders is best remembered as Georgia's first New South governor, a Democrat who provided progressive leadership for the state from 1963 to 1967. By implementing an array of reforms during a turbulent period, Sanders greatly enhanced Georgia's national image. In addition to his political achievements, he had successful careers in both business and law."--"Carl Sanders (b. 1925)" from the New Georgia Encyclopedia, http://www.georgiaencyclopedia.org/ (Viewed February 8, 2010)
"Herman Talmadge, son of Eugene Talmadge, served as governor of Georgia for a brief time in early 1947 and again from 1948 to 1954. In 1956 Talmadge was elected to the U.S. Senate, where he served until his defeat in 1980. Talmadge, a Democrat, was governor at a time of political transition in the state, and he served in the Senate during a time of great political change in the nation as well. As a member of the southern bloc of the Senate, Talmadge was a staunch opponent of civil rights legislation, but he began to reach out to black voters in the 1970s. In 1979 the Senate officially denounced Talmadge for financial misconduct. The Senate's censure, in part, led to Talmadge's defeat at the hands of Republican Mack Mattingly in 1980."--"Herman Talmadge (1913-2002)" from the New Georgia Encyclopedia, http://www.georgiaencyclopedia.org/ (Viewed February 8, 2010)
"[Lyndon B. Johnson] born August 27, 1908, Gillespie county, Texas, U.S., died January 22, 1973, San Antonio, Texas, in full Lyndon Baines Johnson, also called LBJ, [was the] 36th president of the United States (1963-69). A moderate Democrat and vigorous leader in the United States Senate, Johnson was elected vice president in 1960 and acceded to the presidency in 1963 upon the assassination of President John F. Kennedy. During his administration he signed into law the Civil Rights Act (1964), the most comprehensive civil rights legislation since the Reconstruction era, initiated major social service programs, and bore the brunt of national opposition to his vast expansion of American involvement in the Vietnam War."--"Johnson, Lyndon B." from Encyclopaedia Britannica Online, http://search.eb.com (Viewed February 8, 2010) 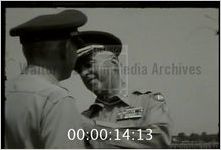 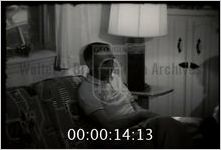 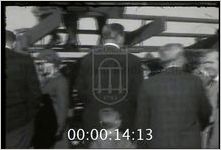 4. Unidentified shots of outside of building (possibly a school) and a neighborhood. 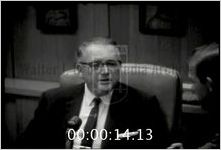 5. WRDW-TV newsfilm clip of an interview with Augusta mayor Millard A. Beckum regarding a closed-circuit telecast, Augusta, Georgia, 1962 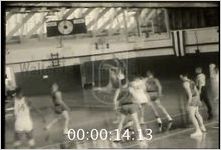 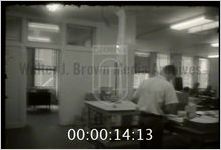 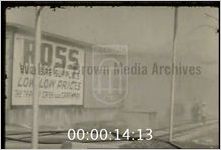 8. Series of WRDW-TV newsfilm clips of the fire at Ross Builders Supplies, 1962 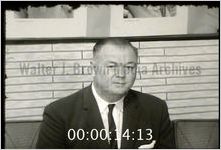