A duel in Georgia

A DUEL IN GEORGIA.

IN the bar-room of a rude tavern and post-house stretch of courtesy be called a gentleman, he deserves

in the western part if Georgia, around rougk deal more particular mention.

table, oraasjeated with two or three old newspapers, Frederick Stuyyesant Sebtiyler belonged to one of

keepi, and small planters. As judg< from of the |Iudgon. ,;! At the age of fifteen he entered

their incessant potations of mint-julep, iherry-cobbler, Columbia, G 8ege, and became, in a short time,

Bangaree, and divera other species pf those American great favoiHIMgith Professor Anthon, and a regular

beverages, the names of which are as singular as attendant at BSssfordi So sedulously did he culti

their flavor is delicious. The party had for some time vate his classics and his billiards, that, on taking hi*

been engaged in a loud and boisterous political con degree at nineteen, he could almost play the pony

versation, when they were suddenly interrupted by ven, and was considered one of the first scholars in

/ What are yJ making all this jaw about ?"

Ifew York. The two years which elapsed between

On hearing this gentferttanfy query, the assemblage Stehuylers graduating and attaining his majority, were

turned their .eyes upon tlw speaker of it with a stare rassed without much profit to himself or any one else.

of astonishment and rage; which, however, was in He was nominally studying for the law; but, like

stantly Converted into an expression of undisguised many young men of fortune, oply did so that he

consternation, a Boon as they fully recognised the might have the credit of belonging to some profession.

This sortOf Efe, however,did not Jast for ever.

In the door-way stood a man at least six feet three At the; period of Which we jcre speaking, the

were moat/essentially villanous, and his large grey irom the great explosion of 1837 ; or, indeed, we may

eyes,gleamed with an expression that was absolutely say that it had nearly recovered. But during the

fiendish. Every thing about him had a ferocious asr continuance of the great panic; Mr. Schuyler, had in

peot, "from the dilapidated white musk-rat b.at that common with hundreds of his brother merchants, be

was fiercely cocked on one side of his head, to the came a bankrupt.

clumsy and muddy shoes that protected his huge feet ; He had but one cause of satisfaction no small one,

white the butts of two horse-pistols, peeping out from it must be confessed?: an Honest man I 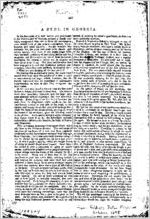