Milledgeville Dec [December] 12th 1851
Dear Sister
I was not in Athens when your letter came -- I left two days after it was written -- for Macon -- I remained there three days & then came to this place -- it was taken out of this office at Athens, read & sent to me here -- I was very glad indeed to hear from [added text: you] -- it is true I read your letters to Father & Mother with much pleasure -- but then it gave me more pleasure to hear from you myself -- I was very sorry to hear that you had been sick -- confound those sick-head-aches [sick headaches] -- I wish there was no such thing as a sick-headache [sick headache] -- or at least that you were free from them -- Athens was very lonesome after you left -- I remained only a short time there & departed also -- I came as far as Macon with John Cobb & his mother -- they came on to Milledgeville I stopped to spend a few days there -- John did not find Miss I at home -- she was in Alabama -- he went [unclear text: there] there again yesterday -- to see her, on his way home -- I spent a very pleasant time [added text: there] -- I met a few of my classmates there -- who carried me all over the place & showed every-thing [everything] worth seeing -- the last night that I was there I staid [stayed] at Col [Colonel] John B Lamar's he treated me very kind -- & was very polite to me indeed -- I like him very much -- his house is furnished elegantly -- & he lives in [added text: a] fine style -- it is just the kind of house that I intend to live [added text: in] when you will come & see me in some western state. I did not call on any of the young ladies in Macon -- although I saw

two or three very pretty ones that I would have liked to have called on -- I had no one to go with & I did not like to go by myself -- I met Lane Bowen in Macon -- on his way to Col. Wilkin's wedding which was to have taken place last Wednesday night -- I do not know whether it came off or not I suppose it [deleted text: [illegible text] ] did though -- Well I will now tell you something about the Governor,s [Governor's] levee which came off on Tuesday night -- there was a tremendous crowd there -- the hous [house] was full -- Mrs. Cobb was very sick at this time they had this Macon band & danced until 3 o clock I saw no lady there except Miss Jackson from Monroe Miss Mattie Cobb & Miss Sallie Jackson that I knew I was introduced to a Miss Lewis from Sparta -- I did not like her much -- I also became acquainted with a Miss Lamar -- who was at Mr. Cobb,s [Cobb's] commencem [added text: ent] she was a very pleasant little girl -- & I thought she was rather pretty -- I danced once with her & twice with Miss Mattie Cobb -- I had seen Miss Lamar once before at the Garden Springs about two years ago when she was a school-girl [school girl] -- I do not know whether you [deleted text: seen] [added text: have ever seen her] or not -- she is rather small -- & fat -- I went down & saw the table before the crowd was invited down -- it was very pretty -- they had f[deleted text: our] [added text: ive] large pyramids -- that were bea [added text: u] tiful -- one of them had the Governors [Governor's] name on it -- the other had written on it The Governors [Governor's] Levee -- one of of [of] them was four feet high -- another 3 and the

rest two and a half -- they had I think about 60 small cakes -- besides some eight or ten baskets of small heart cakes -- & all the other little things that are generally at parties -- Gov [Governor] Cobb looked very handsome indeed -- I did not see either the old gentleman or lady -- Will was there -- he had been here two or three days before -- staying at Dr. Whites [White's] -- I found Uncle Miller,s [Miller's] family somewhat increased -- & old Howell Cobb,s [Cobb's] -- I went up to the State House on Wendesday [Wednesday] & there became acquainted with several young ladies -- to use one of my expressions -- I flew around considerably I went up to see Miss Mattie Cobb yesterday morning -- she invited me up there to tea last night -- I went up & spent a very pleasant evening [deleted text: [illegible text] ] -- most of it with Col [Colonel] Lamar -- he talks a great deal & is very lively -- he seemed to take pleasure in answer [added text: ing ] [answering] all my little questions -- I had my picture taken for you -- I have had my hair cut off very close to my head & it looks rather different from what I did when you saw me last -- the man tried it three times -- the first two looked very stern & I did not like them -- the last one looks most too smiling like -- although I took it -- [unclear text: Buckly] was standing where I could see him & I could [added text: not] keep from laughing at him -- he looked so ugly -- I think the man put him where I could see him just

to make me laugh [added text: I ] -- I will not have time to have it taken in Savanah [Savannah] [added text: Jimmie is my darling] so I had it taken here -- I think it is a very good one [added text: Jimmie is my sweet thing] -- it looks rather foolish though -- I leave tomorrow morning [added text: "Jimmie is my pet"] for Savanah [Savannah] I will get there late tomorrow [added text: Jimmie] evening remain there until Monday & go out to Liberty Monday morning -- I left them all very well in Athens -- I have just received Ned's letter it is rather short -- Ma [deleted text: [illegible text] ] says that they are all well -- What lady was it that you showed my pictures to -- I am very much obliged to her for saying that she [deleted text: thinks] thought it was handsome -- although I cannot agree with her -- I wish you would keep it in the dark -- I am sorry I did not receive the letter you wrote me from Montgomery -- and I am glad for another reason -- which I will tell you when I see you again -- Mrs. Camak was at Mr. Cobb,s [Cobb's] the evening before I left I walked home with her -- & met Anna Camak as I was coming back -- I went home with her then -- it was rather cold & she insisted on my coming in & warming by the fire -- I went in & I staid [stayed] about an hour -- I had called up there soon after dinner & she was not at home -- I expect after reading your letter at home -- they begin to think that there either was or soon would be an understanding between us something like that of Nat B,s [B's] & Puss D,s [D's] -- I went around & told Puss & Anna Billups good-bye [goodbye] -- I sent Miss Matilda Maxwell -- Miss Anna Camak -- Anna Billups & Puss Dougherty each, one of those [illegible text] magazines with [father's] life in it -- he told me to do so -- Well listen Callie I have nearly finished my letter -- & have not written half as much as I want to write I will write again soon -- Please destroy this letter -- Good bye my dear Sister -- until I write again 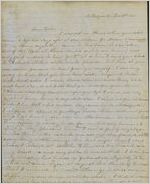