Athens April 25th 1852
My Dear Son
When I address you by these appellations -- do not suppose that I use them in the common or usual sense -- As the husband of a beloved daughter -- I feel -- that you are indeed a son and the constantly increasing affection which she manifests toward you -- makes you deservedly dear -- to me -- to us all -- And pardon a Mothers [Mother's] partiality for declaring that I never was so proud of my child -- to see one so tenderly brought up so petted by us all -- turn her back upon the home of her youth devoted parents and attached family and friends -- with out [without] murmur or complaint and resolve from a sense of duty -- to apply herself diligently & faithfully -- to make herself a blessing & a comfort -- instead of an incumbrance -- as respects you & her new relatives -- We are rewarded for all our sacrifices past and present on her account. Had she been crowned Empress of the World we could no have felt more gratified

I intend that several shall read her last letter to her father -- Appreciated as she was -- no one out of her immediate family -- Knew her real worth. -- By this time all your fears have vanished -- I have no doubt but you should find it difficult to reconcile her to her new home. -- And then we are so happy at the assurance which we have -- that she has a companion who is altogether worthy of her -- One who has no littleness in his nature -- but who will feel a manly pride -- in encouraging her on in the path of duty -- & then reward her by his approving love & smile -- woman's greatest earthly reward
Letters pass so frequently between the different members of the family -- that but little is left in the way of news to communicate -- Lizzy [unclear text: Craige] returned from Florida last week and among other saucy speeches to the old Gentleman -- who accompanied her from Atlanta -- she requested him to tell Callie when he next wrote that Joe Whitman's wife, one of her old [omitted word: friends] beause [because] had twins & lost them this winter Lizzy says she cannot get reconciled to Callie's marring [marrying] that Athens -- seems no longer Athens to her By the way Mrs Le Compte -- & many of her old acquaintances have made the

same or similar flattering speeches -- the sudden death of Judge Meriwether Speaker of the House of Representatives causes quite a sensation in the public mind and makes many to feel that their own end is probably not far distant. -- Judge Nesbet too was very ill when last heard from -- He was unable to attend [unclear text: Case Court] -- Dr. Martin the clerk was confined to his room during the whole Session and [added text: did] not get into the Court House -- there has been great mortality during the past winter and spring in Georgia from typhoid numonia [pneumonia] -- the weather has continued cold down to the present time. Valley- corn was killed by frost in this neighborhood during the past week. Every thing [Everything] is in confusion over at Mr Cobbs, the Carpenters, Painters & Plasterers are all hard at work finishing off the House -- And then all his furniture is arriving which I suppose is very pretty -- although I have not seen any of it yet -- they are making their front yard too very handsome and filled with beautiful flowers and shrubbery -- tell Callie that both of her Antwerp lilies are putting up very vigorou [added text: s] ly -- and one of her Augusta roses has bloomed the

[unclear text: Persian] Yellow -- and I never saw any thing [anything] richer Our front yard is litteraly [literally] covered with roses I am so sorry that they will be mostly out of bloom when you come I was delighted to hear that there was a protracted [unclear text: meeting] in Marion One thing you lack my Son & only one and that is -- to imbrace [embrace] the Saviour while he is so ready to receive you -- O how beautiful did the Gospel appear when I saw your [unclear text: Father] -- a brave man who [unclear text: hastened] undaunted in the fore front [forefront] of battle -- weep at the story of the Cross will you not tread in His footsteps? when he is called to his rest -- Will you not take his place in the Church of Christ? For this I shall never cease to pray. --
With a kiss for Callie and all my dear children love to all the friends I am 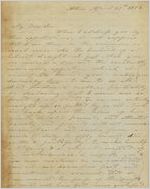