My dearest Callie -
I have tried for several days to write to you but I felt it would be wrong to add to your already sorrowing heart more trouble than its own. & so I've waited until I could try to cheer you. Yes my dear sister - thanks be to God I can truly say to you we have not mourned as those without hope - & 'tho [although] our hearts have been wounded & still bleed we have found the balm of Gilead & the physician there ha [deleted text: ve] s [has] not failed us now -- Pa has borne this trial with the fortitude of a christian -- & has controlled himself wonderfully -- There has been a soft gentle tenderness about him I never witnessed - a patience & meek submission which is [unclear text: lovely]

to witness. Indeed Callie I can see his trials have of late tended greatly to allay his excitable temperament & I doubt not God in mercy has thought it best thus to deal with him. Dont [Don't] think I mean to detract one iota from his almost faultless character - but as he himself remarked today - "afflictions make us forget self - when nothing else will - & even our aches & pains through their light become a blessing when they lead us to God & heaven instead of our own misfortunes & sorrows" -- Our mother Callie I tell you truly has been more cast down than I ever saw her - but she too has gained the victory over self - at least in a great measure. She looked badly & seemed so despairing blaming herself poor thing for not doing when she had almost worn herself out mind & body. Pa has had

through the mercy of God much influence over her which he is so remarkably gifted in turning to consolation. She is now calm - even apparently cheerful - & tho' [though] a subdued sadness pervades our household - in the love we bear each other - in the many blessings we still enjoy - in the rich assurances of dear Lucys [Lucy's] happy rest - we still feel "we can rejoice in the Lord. I write you fully, freely dear Callie as this is now the all absorbing theme with us & I know you wish to hear each minute [unclear text: particular.] As to our dear Sister, Jimmy has told you I doubt not everything. I will only say - with all her faults (& who has not got them) she was one of the noblest souls I ever knew. We were not [unclear text: ever] aware of the true strength of her character - and of her trials which she bore so wonderfully - & which I doubt not consigned her to so early a grave & to so blessed a rest.

Mr Gerdine leaves in the morning [unclear text: for] Miss [Mississippi] . Several of his negroes being ill & a [unclear text: very] likely [added text: boy] has died. We have come to no [unclear text: settled] conclusion yet about the children as to what is best for them but all I doubt [unclear text: not] will be done for them that can be by each one of us. Poor little things so many of them in their black - (which Ma wished them to wear) they seem to attract the pity of all. God will provide for them & he will protect & keep them. Muggie's health [unclear text: continues] very feeble 'tho [though] no other hemorrhage the [unclear text: sick] stomach & headache seem to enfeeble her quite as much. She has been much depressed until the last day or two she is more cheerful & I think rather better. She is at Pa's today - conversing pleasantly & looks better. She took up an idea she would be benefitted going North to Dr [Doctor] Hunter but Callie she is too feeble to undertake the trip especially as she wishes to take the children with her. Dr [Doctor] Moore & all advise against it & recommend to her air & exercise about here as much as possible. Lid keeps well & begins to look quite large. Mattie Cobb is [unclear text: somewhat] better & also Sissy Rutherford. By the way tell Jimmy old Mrs Cobb wrote a letter about him which brought the tears to Pa's eyes & which I wish he could see. [unclear text: Aint] he a dear brother Callie I am willing for you to have him [unclear text: but] you dont [don't] know how much I miss him. He is becoming much more known & observed

Tell Mr King his kind letter to Mr Cobb came last night - & I thank him sincerely for his wish to have us come out. To tell the truth I had intended it but for one reason -- If Muggie gets no worse - I think Ma has an idea of this sort herself & I would not interfere as it might do her good. I mean in the course of a few weeks. Should we all live I intend to visit you 'ere [before] long. We are all that are left to each other now & why should we not be together as much as possible. I would give so much to see your [unclear text: boy] dear little fellow. Kiss him for me & teach him as soon as possible to know me & love me. As to [unclear text: Mrs Manley] Callie we have hesitated what to do. [unclear text: She] seems quite delighted at the idea but as usual - wants to impress you that she will be conferring a great favor - lose many cases, &c [et cetera] &c [et cetera] - But all

of this is nothing if you would like to have her. She is only waiting to hear further from you. Ma hates to take the responsibility of saying whether it will be for the best or not. She wants to do everything aright but now more than ever is fearful of not acting for the best. The old lady I doubt not has floating visions of a pleasant trip & a [unclear text: snug] little sum at the end of it - but as I said these would be mere minor considerations if you & Mr King thought your happiness or safety would be consulted by it. You must write soon & freely your feelings about it & there will be no difficulty in the matter. Keep a good heart Callie. You did so well before I doubt not you will have no trouble like the one you alluded to previous [unclear text: ly] & from your account of yourself I should not be surprised if Miss King did not accompany you on your next trip "to home" -- Willy & all the folks have gone to the R. R. [Railroad] convention in Augusta & we are quite lonely. No news at all. Give love to Mr King & Jimmy from all & write whenever you can. I hope Jimmy's being with you will be the means of cheering you much - as I doubt not it will. We have strawberries now in great profusion. I gathered today over a bushel - some very large. I wish you could see the roses. We trimmed them closely & they are blooming beautifully. The yard is very green & pretty just now. I lost all of my verbena but some of the red nearest the house. Mrs [unclear text: F] rierson has another son. God bless you dear Callie.

The people have all been so kind to us in our affliction dear Callie we love them very much & [unclear text: Muggie] is almost overwhelmed by their attentions to her. Poor Mrs Cardwell died the day after Lucy -- with consumption. Mrs Baxter is quite well again & looks so hearty. Mr Cobb & Eddy are in Milledgeville. Pa did not go to the Court. We are all quite well now - except M [unclear text: a] ggie. 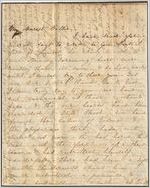