My dearest Callie -
I have been thinking for a long time I would sit down and write you a nice long letter but whenever I have waited for a more convenient season it has never arrived until at last fearing you might suppose I never intended to write again I have determined to spend a few minutes in chatting to you even should I not be very interesting - which is not improbable - as I am far from feeling very well this afternoon. The fact is Papa writes so often I never can find anything very strange or new to communicate and should I happen to tell you that "Bunny Hanson has a beu [beau] " or any of my "on dits" prove stale you need not think it laughable or because I know not what to say. The difficulty is what not to say in the variety which has already been sent to you. Well it is not very wonderful to tell you that Ma & myself have spent the last week without Papa & Mr Cobb & of course we have felt lonely. To beguile the tedious hours we had the rockaway brought out once or twice & as Ma says took quite "a siege" in the visiting line - for whether my

new house or myself has been the attraction the people have never paid me more attention than they have done since my "non appearance from the stage," & the consequence is I am as usual indebted to the whole town. I ought to visit more for I feel it to be uncalled for kindness and I do intend to deserve it more in future. At every house we called "Callie" was the principal theme - and I am convinced no girl ever left Athens more universally beloved, more universally missed. Don't be vain but I assure you from Anna Hull to old Mrs Welsh you were heartily inquired after & more messages of love sent than I can write. By the way Anna Hull has just returned from the North - very much improved in health & appearance. She had on (as you inquired about the fashions) a very pretty "de laine made plain in the waist the sleeves slightly flowing with two bias ruffles of the same about an inch & a half wide at the hand & on the caps bound with silk to suit. I told Mattie Cobb who sails tomorrow from Savannah to New York to write me the latest styles when she reached there and you shall then have the full benefit of them - as we have nothing new here that I have seen. John also accompanied brother Howell & Sister Mary Ann as his health is dreadful - so much so you would

really be shocked to see him. Sister Mary Ann is very much affected by the death of her babe & fearing the consequences she has gone on to place herself under the same Dr. [Doctor] who benefitted her so much before. Her mind as yet seems wholly unaffected but she suffers quite as severely in her body. Mattie had been going up to be prayed for every night for a week past - there having been quite an excitement in the baptist church. Mr Whitner is also quite serious & I begin to have some suspicions about his attentions to Mattie altho' [although] she has never hinted such a thing to me. Mary made a mistake in her calculations & is still in quite an anxious state of "prospectus [unclear text: "] Mr Erwin having again left her to return in two weeks. She seems very happy however & exhibited to Ma & myself her various preparations with quite an air of pride & cheerfulness - you can imagine how nice they are. Mary is so smart with her needle - & Mr Erwin bestows his purse most liberally upon her. Gus King is out again & looks better than I ever saw her. Matilda [unclear text: Dunwoody] left yesterday morning for Early where she will reside looking very happy & contented. She told me to say to you she hoped you would not settle upon a place of residence until you & she met upon the battery in Charleston " where you both in " maiden meditation, fancy free " thought you would delight to live. She seems quite [unclear text: amused] at the change which has come over the spirit of yours & her dreams & made you country ladies.

Cardy Billups leaves on Monday to spend a year & a half at the medical college in Philadelphia. Mrs Billups looks badly - & is breaking fast. Jane I think & Dick Taylor will make a match & I believe it will please all around. Nat Barnard is here on a visit & [illegible text] Dougherty looks quite happy & very prettily. I suppose you have seen the marriage of Sallie Crawford to [unclear text: Joe] Gibson of Americus. This & the birth of John McHenry's third son is I believe all of the news I have to retail. Poor little Noel, Anna Hull says is no better & the Drs [Doctors] think will never be cured. Sarah I fear from all accounts will fall a victim to her grief about him. Well now for home. Where shall I begin. Jimmie is busy preparing to leave us & Callie I know not how to feel about it. I know it will be a fine trip for him in some respects and yet we dread it in others. He seems anxious to take it & as there is but one opinion about it with our friends it has made Ma & Pa consent & yet they feel anxious & deeply about it. He is a dear good - high principled boy & no one will miss him more than me he is so kind to me & mine. He loves his family devotedly & cares little for anything else. I want him to have the advantages of such a trip & yet my poor health is selfish enough to feel most sensibly how hard it will be to give him up. Our family circle is much broken up and Ma & Pa neither being as they once were feel it most sensibly - but they in this as in all other matters strive to act for our good & self is forgotten in their anxiety for our welfare. May God so order all things that they will tend to promote theirs & our temporal & spiritual interests - & prepare us all for usefulness & his glory. Pa's heart is somewhat better. Ma has not been so well since the violent attack she had when Lucy was here. The children are all well & my baby is the fattest little fellow you ever saw. Everyone takes him to be six instead of two months old. I think him the prettiest young babe I ever had Little Cal is the picture of life & health - and is a great pet with all - I think owing greatly to her name

Old Sam Ware's youngest daughter was married last night to [unclear text: Pitner] I suppose you heard that Caroline Pace was dead. I enclose an obituary to Will of an old acquaintance of his. Sally Prince spent several days with me & seems quite happy with Mr Prince. He is very smart & such a genius Pa & I enjoyed his company a good deal. [unclear text: Hesse] & her father are to be with me tonight. Mrs Hill takes on a good deal about her daughters leaving her. Do dear Callie excuse this scrawl. I could write you a dozen such but know you would tire of them. Write often especially to Pa. To tell you how much we love & miss you would be "stale news indeed from sister,

We had a long letter from Lucy last night - all well. All send much love to brother Porter & yourself. 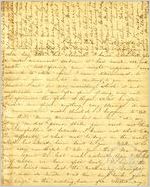