Sparta Sep. 28th/52
I never dreamed dearest Cal, of allowing such an age to pass without answering your last really delightful letter. But my trip North has kept me busy, until the present moment. I have only been South two weeks, and one week of that time was passed in Athens. Seeing so many people there, & finding a sort of family assembly, I did little else than talk & listen. The week I've been in Sparta, I've been very busy getting things to rights. Today I have passed in letter writing. I did not see any of your famly while in Athens. Marion, Lucy and [unclear text: Mr] Cobb, called while I was out, & the day before I left. I was extremely sorry to have missed them, for their own sakes, & because I wanted to hear some recent news of you. I did hear however, & regretted exceedingly the cause of your detention at home, your Mother in law's illness. How painful it must be to you all- such a large family as you now make. As yet Cal,

I have not moved to the country. The settlement Mr. Bird found on the place was not only [deleted text: so] very mean, but not centrally situated - consequently he will move the whole, & having cribs & negro houses stables & every thing else to build, we must be patient. Then we will put up a neat cottage, plain & unpretending, & settle down quietly, until we are able to do better.
I had a delightful two months, at the North. If I had only had Edge, it would have been enchanting. The whole summer was so deliciously cool, & Uncle Leroy's health improved so rapidly, & our trip was so extended & varied, that I enjoyed it exceedingly. But I passed many a heartily homesick moment, & actually dreaded to see night come; so lonely did I feel. Sallie Elmore was my travelling companion from Charleston back to Charleston again; & she has improved greatly. She was so pleasant, so companionable- & her voice has improved, until she was actually a marvel to our Northern friends, & really I do think her the finest amateur [deleted text: performer] singer I ever heard. She asked very often after you. I had a peculiarly pleasant letter from her a few days ago. Emma [unclear text: Dawson] is in white, & I hear does not look

so well, as in black. My good Uncle you know, refused to take any precautions, or to give up business, unless Sister or myself would go with him. The thing was vetoed at once by Edge, but after hearing the state of his health & understanding the imperative necessity of giving up business for awhile; It was agreed that I should go - I felt as if I were parting soul & body, when I left Edge & the children, but stood it bravely I think. Sally Elmore says she had the benefit of all my sorrows, for they were poured forth at night & she had to listen. Uncle Leroy loaded me with every thing rich & beautiful - quantities of dresses, embroidery, a superb velvet cloak & elegant hat. Nothing was left undone to render my time pleasant & Sallie & I passed some delightful days among his New York friends, & I am glad to find he has many, very sincerely attached to him, so that if he should be sick I will feel sure he is well cared for.
When shall we meet dear Cal? I want to see you very much, and hope there will not be another year over us - before we do meet. What sort of a crop have you & Cousin Porter made? Edge has made a fine grain crop, but planted but little cotton - next year if nothing happens, he'll plant

more cotton & less corn, as we are supplied for two years. But you have many more wooly heads, as the students call them, & of course beat us. Edge & I start modestly I assure you. But we would rejoice most heartily to welcome you here. Can you not come & see me when you come to Georgia? Think of it Callie & try to do so. I never could write less than three letters a week, while I was away from Edge & my darlings, so that took up most of leisure moments. Otherwise dear Cal, you would have heard from me long 'ere [before] this. So pray write me soon again. Excuse what I know to be a remarkably stupid letter, but I am tired & yet want to write you. But you will write soon, won't you dear friend? I hope so. I hear often from Lucie Terrell. She was in France at the last accounts, & expecting to go to Switzerland, Italy, &c. [et cetera] - & then to Constantinople & Greece. Gov [Governor] Crawford's family are travelling with them. I saw [unclear text: Lizzie] Dickson, for four days while I was gone & enjoyed it so much. [unclear text: Em] Stephens is invisible, except within doors. Sallie Crawford is to be married on Thursday, the 30th of this month, to Gus Gibson a nephew of [unclear text: Dr. [Doctor] ] Terrell's. She came to New York & staid [stayed] two weeks, while I was there. Her husband that is to be, is highly spoken of by some. [unclear text: Duck] told me much of him, & Corinne writes about him, in a droll manner.

Father and Mother send love to you always. Edge says he wants to see you & your "gude man" as much as I do. I think that impossible. Your father's house in Athens looks very prettily in its new coat, & [unclear text: Mrs.] Cobb's is a remarkably pretty place. Poor Mary Jones is still in bed and looks shockingly. She insisted on seeing me & she was very much agitated when we met. But I don't think it is possible she can weigh 50 pounds, & I fear she will never be well again. Her baby is 4 months old & she not up yet.

Give my love to Cousin Porter & dear Cal, accept for yourself double quantities of true love. I long to see you. Give

my regards to Joe & Will, and their wives also. Sister & Mother were both very much pleased with Will's wife. I had seen Joe's for myself & need no telling of her worth. 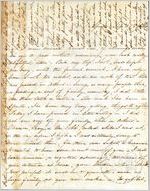