For Immediate Release Wednesday, May 11, 2022
First Lady of Georgia Leads Fight Against Human Trafficking, Gov. Kemp Signs Bill to Crack Down on
Perpetrators
Atlanta, GA Today, Governor Brian P. Kemp signed SB 461, spearheaded by First Lady Marty Kemp and designed to further the fight against human trafficking in Georgia. The legislation adds human trafficking to the list of serious violent and sexual offenses that require a superior court judge to grant bail and builds on the work of the First Lady, the GRACE Commission, the Georgia Bureau of Investigation, and the Human Trafficking Prosecution Unit under the purview of Attorney General Chris Carr.
"No issue to improve the safety and well-being of Georgians has had more bipartisan support than the top priority of our First Lady and the GRACE Commission -- to end human trafficking in our state," said Governor Brian Kemp. "With Marty lending her voice to this important cause and working to streamline communication between the public, private, and non-profit sectors, Georgia has changed the conversation around human trafficking while championing reforms that make our state a safe haven for victims and a place of punishment for traffickers. I'm glad to sign this bill into law, and I am thankful for all they do for Georgia's children."
"Brian, the girls, and I are passionate about protecting those most vulnerable and supporting our law enforcement officials in cracking down on those who wish them harm," said First Lady Marty Kemp. "Before now, some criminals were able to get back out onto the streets and begin preying on young victims again within hours of their initial arrest. But, thanks to SB 461, we will now have stronger procedures to prevent that from happening. I want to thank all the members of the General Assembly who unanimously voted for this measure, as well as Senator Clint Dixon, Representative Jodi Lott, and their fellow co-sponsors of the bill for seeing it across the finish line and to Brian's desk for his signature."
"As the nation's staunchest advocate for human trafficking survivors, Marty Kemp continues to shine a light on this despicable crime, leverage bipartisan support to hold bad actors accountable, and deliver critical resources to the most vulnerable among us," said Georgia
5/13/2022, 8:19 AM

First Lady of Georgia Leads Fight Against Human Trafficking, Gov. Ke... https://madmimi.com/p/6b61f31?pact=533196-167806611-11554464864...
Department of Human Services Commissioner Candice Broce. "Over recent years, her efforts bolstered by the GRACE Commission and often unanimous legislative approval have made the Peach State a true model for eradicating this industry and preventing exploitation of countless young men and women. This legislation is an immensely powerful weapon in Georgia's continued fight against human trafficking." "Thanks to the tireless efforts of First Lady Marty Kemp and the bipartisan support of the members of the legislature, there has been another tough piece of legislation brought to the finish line in the fight against human trafficking in the great state of Georgia," said Susan Norris, Founder & Executive Director of Rescuing Hope. "Traffickers have experienced high profitability and low risk for too long in our state, and thanks to SB 461, that changes today. Because of our passionate pursuit of justice for those victimized by this atrocity, Georgia is seen as a leader in this fight in our nation."
Press Contacts Katie Byrd - Communications Director Office of Governor Brian P. Kemp katie.byrd@georgia.gov Andrew Isenhour - Deputy Communications Director Office of Governor Brian P. Kemp andrew.isenhour@georgia.gov
2022 Office of Georgia Governor Brian P. Kemp | Georgia State Capitol
Web Version Preferences Forward Unsubscribe
Powered by Mad Mimi A GoDaddy company 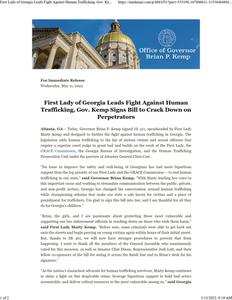