W W Oats vs [versus] J. C. Early agt. [agent] of the Dahlonega Mining Company / Rule Nisi on Court Contract.
We hereby waive a written answer to this rule Nisi & consent to trial upon its [unclear text: Mines] without a Jury.

Upon hearing the testimony of witnesses on both sides and argument of Counsel. It is ordered and adjudged by the Court that W. W. Oats lessee do recover of the Augusta & Dahlonega Mining Company lessors the sum of one hundred Dollars

damages for breach of Court Contract & the further sum of Twelve dollars & 12 cents cash of this suit in this behalf laid out and expended in an execution do issue for the same this 18th June 1867,

[Signed] John C Britten. C J. [Chief Justice]
Upon hearing the evidence & argument of counsel on both sides of this [deleted text: case] above stated case it is further ordered by the Court that John C Early Agent of the Augusta Dahlonega & Mining Company Be compelled to comply from day to day until the property stated be put in a suitable condition for Merchantile [Mercantile] purposes with said Court Contract and that said Defts. [Defendants] be required forth with [forthwith] to go to work and repair said house in strict terms of the Contract & upon falure [failure] thereof that the said Defts [Defendants] be in Contempted [Contempt] of this Court this 18th June 1867.

Appeal Board W. W. Oats vs [versus] J. C. Early agt [agent] & C. [Counsel]
The defendant being dissatisfied with the Judgement [Judgment] of the County Court in this [deleted text: state] case demands an appeal in terms of the law & having paid all cost which have accrued brings forward J. H. Morley and tendered him as security on said appeal and the said J. C. Agent of said Company & J. H. Morly security acknowledge themselves their heirs executors & administrators jointy [jointly] & severally bound unto said plaintiff for the payment of the [unclear text: rent note condemnation] money & all cost In testimony whereof we have hereunto set our hands and seals -- this 18th day of June 1867.
[ Note: Handwritten seals appear next to the signatures below.]

W. W. Oats vs [versus] J. C. Early agt. [agent] of Augusta-Dahlonega Co [Company] Court Contract &c [et cetera] Appeal Sept. [September] [unclear text: Seven] 1867.
It appearing to the Court that all the original papers in this case is lost. It is therefore ordered [added text: that] the above and foregoing copy of the proceedings in said case, be established in lieu of the lost originals. This 6th Sept. [September] 1867.

Georgia. Lumpkin County
That all men by these presents that I J. C. Early agent of the Augusta & Dahlonega Mining Company have this day leased & rented unto W. W. Oats for the Term of twelve months to commence on the 15th February next ensuing and to terminate on the 15th February 1868. for the sum of three hundred and fifty Dollars payable monthly at that rate in Advance, the Store house [Storehouse] & bar rooms including rooms above lying on the South West [Southwest] Corner of the Town of Dahlonega in said County & the said W. W. Oats for himself his heirs executors & administrators hereby promise to pay said rents or they fall due according to the above terms -- The said J. C. Early agt. [agent] as aforesaid is have [to have] such repairs made to said store house [storehouse] and rooms as are indispensable to make them suitable for Merchantile [Mercantile] purposes. The said Oats has no power to sub rent [subrent] or lease said Store house [Storehouse] & rooms with out [without]

the consent of said Company or its agent -- In testimony whereof said parties have each hereto sit [set] our hands & seals this 30th day of January 1867.
[ Note: Handwritten seals appear next to the signatures below.]

signd. [signed]
[Signed] W. W. Oats
[Signed] J. C. Early
I hereby guarantee the payment on the part of my son W. W. Oats, witness my hand and & seal this day and year aforesaid.
[ Note: A handwritten seal appears next to the signature below.]

W. W Oats vs [versus] J C Early agt [agent] & C. [Counsel] Court Contract.
We Consent & agree [added text: that] the foregoing is a true and correct copy of the lost originals, and the same we use instead and lieu of said lost originals upon the trial of the above stated case. This 6th Sept. [September] 1867. 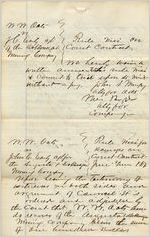