Description
Because of its business and housing content, we believe this 16mm color amateur film of scenes in and around Athens was made by Joel A. Wier. We date the original film to 1947 because the films screening at the downtown theaters - the Ritz, the Georgia, and the Palace - are "The Dark Corner" (released in April 1946), "The Jolson Story" (released in October 1946), "The Razor's Edge" (released in December 1946), and "Valley of Fear" (released in February 1947). The two earlier films may have taken some time to get to Athens after their initial New York and Los Angeles premieres. The more striking aspects of the footage are the extreme differences shown between the houses along Milledge and Prince Avenues, and the African-American neighborhoods, as well as the then fairly new public housing and apartments along Broad Street. These neighborhoods have been identified as "Tip Toe Alley" (between Finley and Newton Streets at Baxter Street) and "Linden Town" (Lumpkin near Baxter), both of which were razed for public housing and for University of Georgia expansion. Also included is footage of local service organization members (Kiwanis, Pilot Club) gathering for lunch downtown, local bankers and businessmen outside their buildings, a scene of the Chamber of Commerce building, aerial views of Athens, a livestock auction at the Northeast Georgia Livestock Association building, a Shriners parade downtown, the airport, UGA campus scenes, the Garden Club of Georgia's Founders Garden, a golf course, Athens General Hospital, and the Rodgers Hosiery Company.
"Athens, home of the University of Georgia (UGA), is located along the north Oconee River in Clarke County, in the rolling Piedmont of northeast Georgia. Athens and Clarke County combined to form a unified government in 1990. According to the 2000 U.S. census, Athens-Clarke County had a population of 101,489, making it Georgia's sixth-largest metropolitan statistical area."--"Athens" from the New Georgia Encyclopedia, http://www.georgiaencyclopedia.org/nge/Article.jsp?id=h-2210&hl=y (Viewed December 7, 2009)
Joel A. Wier was Executive Director of the Athens Housing Authority as well as Director of the Athens Chamber of Commerce (1931-1949). 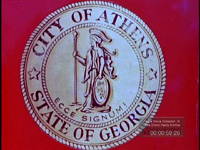