Black-and-white photographs of East Point, Georgia taken between 1947 and 1954. 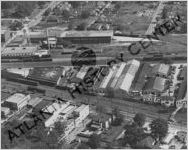