A 1937 film of the roadside environs along Marietta Street and other downtown roadways beginning in or near downtown Atlanta, heading northwest towards Kennesaw Mountain, and ending in the Marietta Square.

Description
William A. Horne, Jr. (1910-1991) was born in Atlanta, Georgia, and attended Technological High School and Georgia Institute of Technology. Mr. Horne became president of J.C. Penney and was president of the Jaycees when he shot the film of Marietta Street., The collection, in its original format, is a single 8mm black and white acetate film. The film captures the roadside environs along Marietta Street and other downtown roadways beginning in or near downtown Atlanta, heading northwest towards Kennesaw Mountain, and ending in the Marietta Square. Mr. Horne appears to be following the inner urban streetcar route. There are several billboards for businesses located in downtown Atlanta: Downtown Chevrolet Co., Henry Grady Hotel, Ansley Hotel, and Hotel Hampton. The route passes beneath several Seaboard Railroad crossings and a large train yard, probably Inman Yards. Also of particular interest in the a streetcar is shown with African-Americans boarding at the rear of the car. During last several minutes of the film is a segment showing an unpaved section of Marietta Street/Road. The car follows the dirt road to a road closed sign and a construction zone. The remaining twenty to thirty seconds of the film captures a portion of the Marietta Square. Recognizable buildings include the Schillings Building and First National Bank. 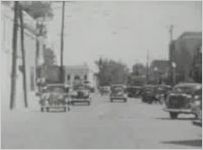