Film of the Atlanta Art Association's ill-dated museum tour of Europe in 1962.

Description
The Atlanta Art Association sponsored a museum tour of Europe in 1962. Soon after takeoff on June 3, 1962 the Boeing 707 crashed and 130 passengers died including 106 Atlantans. Many of those who died on the flight had strong ties to the arts and cultural organizations. To honor the victims of the crash the Atlanta Arts Association became the Atlanta Arts Alliance which today includes the High Museum of Art, the Atlanta Symphony Orchestra, the Alliance Theatre, the 14th Street Playhouse, and the Atlanta College of Art., The collection, in its original format, is one reel of black and white acetate 16mm film. The film captures some members of the tour group boarding an Air France jet in Atlanta, Georgia. Among the passengers captured boarding the plane were Tom Little, Charlotte Little, and Ruth McMillan, the trip's organizer. It is unclear from the footage if the plane is in Atlanta, Georgia or Orly Field near Paris, France. The donation records indicate the passengers are boarding the plane at Orly Field, but a shot of the terminal shows the text for the gate information in English. Also, the Air France jet is named Chateau d' Amboise and according to details regarding the crash, the jet that crashed was named Chateau de Sully. 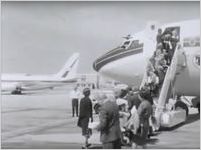